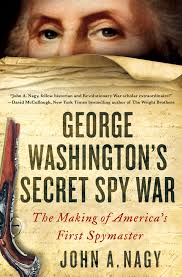 In George Washington’s Secret Spy War, John A. Nagy has performed a public service by showing that spying during the Revolutionary War was not as thrilling — or as visible — as it is depicted in fiction. The Culper Spy Ring, portrayed on TV as the supreme espionage organization of the war, for example, was Washington’s “fourth and overcredited spy ring,” Nagy writes. He looks beyond episodes of spycraft to seek out and appraise the roles of intelligence and counterintelligence in a long war that had few American military victories.

Nagy’s scrupulous research has unearthed “hundreds of spies who went behind enemy lines to gather intelligence.” Not all of them in this book, but there are so many that some vanish from the narrative and hide out in long endnotes. (Don’t miss the endnotes!)

Others appear in paragraphs that require a re-read to sort out who is spying or counter-spying on whom and which side each one is on. There are spies, moles, double agents, and even a suspected triple agent. There is also a family full of spies, some on one side, some on the other. It’s easy to understand why Major George Beckwith, the British spymaster in America, said after the war, “Washington did not really outfight the British; he simply outspied us!”

General Washington was also Spymaster Washington, who personally ran spies and folded into his strategy the information that spies delivered — often directly to him. Washington had a sophisticated appreciation of the role that treachery plays in espionage. Describing the ideal spy, he said he favored a mole reporting from inside the foe’s forces rather than an agent sent into the foe’s camp. “The greatest benefits,” he wrote, “are to be derived from persons who live with the other side…It is with such I have endeavored to establish correspondence, and on whose reports I shall most rely.”

Nathan Hale, sent behind the enemy lines on his first mission, was arrested and hanged without a trial after trusting a British officer who boldly posed as a fellow American spy. Nagy, writing about Hale, says, “There is no evidence that Washington had ever met him. Washington, with his attention to detail, would have provided him with guidance to trust no one.”

Nagy begins by recounting Washington’s first encounter with espionage as a young Virginia militia officer on the eve of the French and Indian War. His 900-mile trek beyond the Alleghenies produced a highly detailed report confirming the French expansion on Virginia’s western frontier. The report, published as The Journal of Major Washington, made him famous in America and in Britain. His next journey into the wilderness would bring on the war and put him on the path that would lead to his congressional appointment to command of the Continental Army.

Directing an army that was formed of outnumbered, outgunned citizen-soldiers, he saw the value of becoming a self-taught expert on clandestine warfare. One of his specialties was invisible ink, which he learned to produce, use, and carefully dole out. He also learned how to encrypt and decrypt messages from agents and opponents.

Deception was an espionage weapon that Washington frequently wielded. Nagy tells of one that started when Washington sent Major General Benedict Arnold in Philadelphia a draft of a proclamation, in French and aimed at French-speaking Canadians. The draft urged the Canadians to ally themselves with French troops who were going to join with the Continental Army force in an imminent invasion of Canada.

Washington ordered Arnold to find a printer who would make 500 copies of the document. Washington’s aim was to get the proclamation into the hands of Canadians and British spies, starting rumors of an invasion and leading General Henry Clinton, British commander-in-chief, to react with strategy based on disinformation.

In a twist that sounds like a TV script, Arnold was already negotiating his treason with British intelligence contacts. He informed Howe’s chief intelligence officer about the proclamation, apparently to show his newborn allegiance to Britain.

When Nagy describes typical steps involved in a traditional deception plan, he veers off to describe similar strategies used during World War II and in Operation Desert Storm. Although it may be interesting to know about the durability of deception as strategy, it is an odd and distracting diversion in an otherwise sound and authoritative narrative.

Washington’s crowning distraction was a multifaceted series of moves — repairing a northward road or building boats for an amphibious landing. He was producing a façade that indicated a looming strike at British-occupied Staten Island. The invasion force that was forming included French reinforcements who had arrived from Rhode Island. Washington knew he could make his real move after receiving an intelligence report saying that the British “have been throwing troops upon Staten Island.”

Of the distraction operation, which shielded the American-French march southward, Nagy writes, “[It] led to the eventual surrender of General Cornwallis at Yorktown and…the ultimate victory over the most powerful military of its day.”

Nagy adeptly weaves together the battles in the visible Revolutionary War and the covert actions in the spy war, with George Washington the commander-in-chief of both.

Thomas B. Allen is the author of George Washington, Spymaster; Tories: Fighting for the King in America’ First Civil War; and Spy Book: the Encyclopedia of Espionage (co-authored with Norman Polmar).