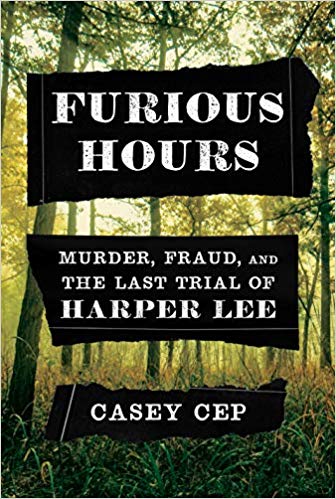 In June 1977, Robert Burns shot Reverend Willie Maxwell in the head during a funeral service. Two months later, a world-famous writer, “dressed like a pauper,” sat in an Alabama courthouse, taking notes on the trial without attracting any notice.

As Casey Cep’s spellbinding Furious Hours: Murder, Fraud, and the Last Trial of Harper Lee reminds readers, 17 years had passed since the publication of To Kill a Mockingbird — and, roughly, since Harper Lee had last given an interview.

In that trace of time, Lee’s only book had catapulted into “classic” status, outsold most major novels, and was read with relish and reverence from America to Africa. But Lee’s boogeyman was the unyielding, omnipresent expectation for a second, equally brilliant work:

“With her first novel, she told [Gregory] Peck, ‘nobody cared when I was writing it; now it seems my neck is being breathed on’…Her new mockingbird was starting to seem more like an albatross…‘My agent wants pure gore & autopsies, my publisher wants another best-seller, and I want a clear conscience, in that I haven’t defrauded the reader.’”

Nearly two decades earlier, she’d had a gratifying experience working with Truman Capote during the research phase of In Cold Blood. So, when Lee learned of the Maxwell murder and history from the newspapers, she traveled to her home state of Alabama, hoping an investigation into the crimes would climax with that elusive Second Book.

Willie Maxwell married Mary Lou Edwards after his voluntary discharge from the military in 1948. He was hired and fired from a job at the town’s largest textile mill, and then pivoted — adroitly — among stints in sharecropping, drilling, pulp-wooding, and preaching.

As he achieved financial success, personal debt piled up and marital tensions mounted. Maxwell’s neighbors assumed the reverend was “living” the gospel of gratitude he persistently preached, proclaimed, and pontificated on in various parishes.

But in the dark places where few were looking, he cheated on his wife, fathered an illegitimate daughter, drank, mulled over murder, and took out a profusion of life-insurance policies — by mail and proxy — on his wives and family members in which he was named the sole beneficiary.

Maxwell hired Tom Radney to defend him. A former Democratic politician who had lost his congressional and lieutenant-governor runs to the Alabama “machine” controlled by Governor George Wallace, Radney returned to practicing law and rose to become an influential and successful attorney in Alexander City.

Radney “rescued” Maxwell from the reformatory with five acquittals and collected approximately $100,000 in insurance payouts on his behalf, despite obstreperous objections from the underwriters. Even local officials fished, forensically, for ways to nab Maxwell, but nobody was ever able to prove any wrongdoing.

When Maxwell’s stepdaughter, Shirley, died — the fifth death attributed to him — a terrified town believed it was voodoo: “Now women…whispered a warning to one another: ‘Don’t let Will look in your eyes…’”

Shirley’s 36-year-old uncle, Robert Burns, was at Shirley’s funeral partially because he was fearful of more massacres by Maxwell:

“By all appearances, [he] was unassuming, hardworking, a tenderhearted family man, right until he pulled a gun and, from three feet away, with a whole chapel watching, shot and killed…Reverend Maxwell.”

Radney, always on the prowl for a client, seized the high-profile case. The trial lasted two days; after five hours of deliberation, the jury determined that Burns was not guilty by reason of insanity:

“When the staff at Bryce [Hospital] evaluated Robert Burns, they did not agree with the diagnosis offered by the experts…at his trial. That wasn’t very surprising, because…it had come out that those experts did not even agree with themselves. ‘In a way,’ Dr. Gunnels [an expert witness] said, ‘killing Willie Maxwell was the sanest thing anybody did all summer.’ There wasn’t a jury in Tallapoosa County…that would have convicted Burns, who ‘was just doing what the law ought to have done sooner.’”

Harper Lee, still residing at Alexander City’s Horseshoe Bend Motel, “had committed herself to a book built from facts, but when it came to the story of the Reverend Maxwell, those were hard to come by and harder still to verify. Many of the people she talked to never really knew the details of the case, some had already forgotten them, and others had reason to lie.”

After a year, Lee left Alexander City with the expectation of seeing her new friends again — until she returned home, started to sort through her notes, and realized The Reverend, as the second book was to be called, could not be swept into a meaningful work. Lee confessed to a fistful of friends that the nonfiction approach had not succeeded — nor had a try with fiction:

The book was abandoned.

David Bruce Smith is the author of 11 books and founder of The Grateful American Foundation, which is celebrating its sixth year of restoring enthusiasm about American history for kids — and adults — through videos, podcasts, and interactive activities, and The Grateful American™ Book Prize for excellence in children’s historical fiction and nonfiction focused on the United States since the country’s founding.