A working-class beauty queen takes on 1960s television in this funny, probing novel. 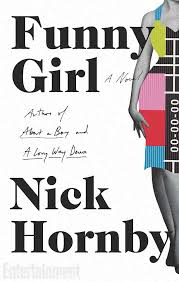 English novelist Nick Hornby is the king of taking on cult topics and satirizing them lightly, with heart and precision. His well-researched narrative backdrops (vintage music, metaphysics, and aging indie musicians) have delivered clever commentary and entertaining insights.

In that same tradition, Hornby’s new novel, Funny Girl, trills up and down the comic register as an homage to 1960s BBC sitcoms such as “Marriage Lines” and “Till Death Us Do Part.”

The year is 1964. Barbara Parker is a beauty queen from a working-class town in northern England, but her true aspirations lie in comic acting. She soon leaves behind her aging father and moves to London in hopes of finding a more glamourous life.

After landing an agent and changing her name to Sophie Straw, she is sent to audition for a new comedy at the BBC, a television series created by two writers Sophie admires greatly from their work on radio shows: Tony Holmes and Bill Gardiner — former army buddies with dodgy pasts.

Clive Richardson is to be Sophie’s co-star and on-screen husband. But he's a sulky egomaniac who feels he’s bound for better things. Then there’s the show’s producer, Dennis Maxwell-Bishop, who strains against upper-class expectations in order to live his passion for popular comedy.

Sophie will, ironically, play a version of her old self in the sitcom: Barbara from Blackpool, a common girl married to middle-class Jim, played by Clive. As the series “Barbara (and Jim)” takes off and Sophie Straw becomes a household name, the relationships among the staff of “Barbara (and Jim)” start to inform the show’s storyline, and vice versa.

Hornby’s treatment of the era’s social issues deserves applause, and more than canned studio-audience approval. He presents England’s class structure with complexity, showing how income and lineage are far from the only factors along the imperfect continuum, which also includes intangibles like taste and temperament. There are frequent appearances from a “posh” culture critic who scorns the show’s low-brow appeal and steals Dennis’ wife, Edith. Edith seems to think her affair is merited because of Dennis’ lack of interest in snobbish pastimes such as wine tasting and sarcasm.

Sexuality is ever present, though never too much on the nose. Bill and Tony, the creators of “Barbara (and Jim),” share a mostly unspoken burden as sexual outcasts. Bill, because he is gay (though the word is never said), and Tony for being either closeted, asexual, or possibly, as Bill suggests, “ambidextrous.”

Despite his sexual confusion, Tony is married, which disappoints Bill enough to disrupt their work. During a tense scene, Bill confronts Tony for taking the easy road (marrying a woman). Meanwhile, for some time at least, Bill seems to have won the game of life after he takes a chance and writes a novel, a fictionalized account of his life as a gay man.

Thus we arrive at the most important theme of the book: does happiness belong to those who favor risk and chase dreams, or to those who accept their lot and play it safe? Hornby is too sophisticated to offer an easy answer, and examples in support of both (or neither) flare up as the novel unwinds.

But for all the accomplishments of Funny Girl, it’s not an amazing read. There isn’t enough depth or tension until the final section, when, at over 450 pages, most books would have already rolled the credits.

The impressive wit (“Dennis hated Pipe Smoke, even though he watched it every night”) is never matched by emotional appeal, making the story feel somewhat formulaic, more like genre than literary fiction — a reading experience that pales in comparison to Hornby’s heartfelt and hilarious 2001 hit, How to Be Good.

Reading through, I was also tripped up by publisher’s choice to present an overwhelmingly British book in American English. As if readers in the United States could be counted on to understand English humor (humour!) and vocabulary, but not its spelling.

Funny Girl is, as it promises, extremely funny, and it will no doubt find admirers, particularly among fans of British culture and those with comic orientations. I only wish I loved it more.

Dorothy Reno is a DC-based writer who’s been published by Red Tuque Books and is working on a collection of stories called The One that Got Away. She grew up in Canada and has only recently yielded, somewhat bitterly, to American spelling.

This Place That Place: A Novel

A provocative yet exasperating “antinovel.”