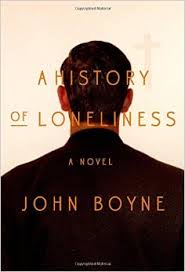 Very early in John Boyne’s latest novel, A History of Loneliness, we are given the measure of Father Odran Yates, and it is the man himself who reveals it. His second sentence to us is, “I might start with the evening I showed up at my sister’s home for dinner and she had no recollection of issuing the invitation; I believe that was the night when she first showed signs of losing her mind.”

He describes going to Hannah’s house for dinner almost a year since last being there after her husband, Kristian, died at only 42. It is just Hannah and her shy, awkward 16-year-old son, Jonas, there; the angry, older son, Aidan, has moved to London.

Odran describes the painful evening and how his beloved younger sister moves back and forth between lucidity and confused non sequiturs. And even as Jonas catches him on his way out and tries to articulate his concerns for his mother — during the same instance that Odran has asked whether everything is alright and says he and Jonas should talk more — we see Odran escaping out the door, cutting Jonas off and refusing to acknowledge that anything is amiss: “But I didn’t let him continue…I felt the guilt of it but could do nothing.”

If, at this point, readers are thinking, “How could you?” then they should get used to thinking that consistently throughout this story, with growing urgency and disbelief.

Odran is a middle-aged Irish priest working in a private school for privileged boys, teaching English, celebrating daily Mass, and keeping the library organized. He’s held this position since his ordination in Rome 27 years before, and he is safe and happy here. Not everyone has felt the same, though, because, as it turns out, one of the school’s teachers has recently been sentenced to six years in prison for sexual abuse of minors.

We learn this fact when Odran is summoned to a meeting with his archbishop, which he fears may be an interrogation about what he knew or suspected. Instead, it turns out to be something much worse: The archbishop is yanking him from his cloistered existence and reassigning him to a parish for the first time in his clerical career. The move is at the suggestion of Tom Cardles, the priest whose parish Odran will be taking over.

The reader spends most of the novel understanding far more of what’s going on than Odran, who, like a deliberate Forrest Gump, skates over the surface of his life, innocent and unaware, assiduously avoiding having to put two and two together. In choosing willful ignorance, Odran churns up a wake of pain and devastation, which cuts through his own family, while he plows along, unseeing.

For Boyne, Odran represents an entire denying populace. A History of Loneliness is a horrifying tale primarily for its truth, but it’s at its weakest when Boyne cannot find a way to channel his anger and vents it directly onto the page.

Archbishop Cordington — later made cardinal as a reward from “the Polish pope” for many years of service — embodies all of the brutal inhumanity of the Catholic bureaucracy, and therefore his character is a ridiculous caricature. The back-and-forth arguments and diatribes later in the book seem gratuitous and unnecessary; nothing will convince the church’s protectors that they were wrong, but for the rest of us, Boyne is preaching to the choir.

Odran tells us that he and Tom are best friends, but we never see what bonds them beyond proximity and time, and perhaps that is truly all that is there, and it is Odran who mistakenly equates time with closeness.

Certainly nothing recommends Tom to the reader. No matter how damaged we understand Tom to be — and we are sure to understand far more than Odran does — he is never a particularly sympathetic character. Thus, it seems odd when, later in the story after the extent of the abuse has been revealed, Odran denies knowing Tom three times in a row when he is called out in a hostile public situation, even though he has known Tom since their first day together in seminary.

Boyne uses the same device in The Absolutist, but the Christ/Peter analogy is far more apt in that story. Here, it’s a true head-scratcher as to what he wants the reader to think of his likening an unrepentant serial pedophile to Christ.

Through Odran, Boyne displays real affection for the newly elected Pope John Paul I, whose willingness to question Vatican finances and other apparent church corruption made him dangerous. When we finally learn what failure Odran committed the night the pope died, we are stunned by Boyne’s implication about historical events. Even after this, Boyne’s narrator, in true Odran fashion, retreats into self-absorbed obtuseness, noting that the events result in a black mark against him, effectively eliminating any hope of advancement in the church.

Odran isn’t despicable, and we are pressed to question how well we would do in his stead. In some ways, especially later in the book, I found myself thinking that Boyne might have done better developing a nonfiction treatise on inherent church corruption, and the protectionist attitude that has damaged the institution and all the people the institution betrayed. In particular, he highlights the endemic misogyny of the church to raise a thought that perhaps there’s a connection from that to its rampant pedophilia and tolerance of it.

Finally, Boyne argues that Ireland is particularly vulnerable to this type of abuse because it is so thoroughly Catholic. Indeed, it’s hard to find a parallel example: Italy, in comparison, may love the pope, but only about 10 percent of the population attends Mass. A History of Loneliness highlights the dangers of allowing one institution to wield that much power over a society. Even today, Boyne reminds us, the church runs 90 percent of the schools. It’s a chilling thought.

Jennifer Bort Yacovissi’s debut novel, Up the Hill to Home (coming this April from Apprentice House), tells the story of four generations of a family in Washington, DC, between the Civil War and the Great Depression.