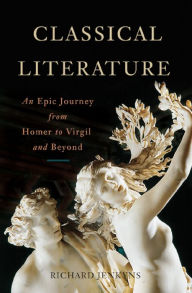 “The classics,” said Edward Bulwer-Lytton, “are always modern.” An extraordinarily prolific and popular writer in his own time, the Victorian Bulwer-Lytton was himself the product of a world known to few today better than to Richard Jenkyns, professor emeritus of the Classical Tradition and Public Orator at Oxford University, whose first book, The Victorians and Ancient Greece, was devoted to exploring the 19th-century reception of classics.

But if classical literature is ever-fresh, for us no less than for the Victorians, so too is the need for a reliable introduction to its riches accessible to readers of various ages and levels of prior exposure and comprehensive enough to give some sense of the scope of the topic. Jenkyns’ new book, Classical Literature: An Epic Journey from Homer to Virgil and Beyond, fills just this need and will be a great resource both for interested general readers and for undergraduate or even high-school students in need of a brief but synoptic survey of ancient Greco-Roman literature.

The book begins, naturally enough, with Homer and proceeds with brisk but responsible pace through the wonders of Archaic, Classical, and Hellenistic poetry and prose. The jump to Rome feels fitting, both chronologically and because of the continuities of influence Jenkyns has developed in his treatment of the Greeks, and the subsequent march through Virgil and the Augustans is both elegant and riveting.

In short, this is some 1,000 years of literary history presented in a very few pages, organized around the obvious high points, yet not as a series of disconnected vignettes, but as a story in its own right.

And not just any story, but a particularly gripping one, for Jenkyns’ enthusiasm lends a potent urgency even to his scene-setting descriptions and his choice of quotations, to say nothing of his electric prose when he comes to one of his own favorite ancient authors. This book is a literary appreciation in the best sense of the word: It offers neophytes a sense of where they might look for beauty in the classical canon and recalls more experienced classicists to the flush of their first love.

One of Jenkyns’ great strengths stems from his vast erudition in the classical tradition. References to English literature, especially, populate the pages of this book without crowding the central focus on the ancient texts. But these comparisons are far more than decoration. Jenkyns is concerned at every point to show how genres, attitudes, and ideas unfold across and beyond ancient literary history.

So, for example, in his treatment of Euripides, he explains the acratic heroine in terms of Platonic and Aristotelian psychology, but then also signals her importance for Freudian thought; Hippolytus reminds him of the Romantic “Don Juan in hell” motif, but more for illuminating contrast than to assert an inert genealogy for the later hero-type.

This kind of reading forward beyond antiquity is obviously related to how Jenkyns reads within classical literature, where later authors frequently pop up in treatments of earlier periods, whether as reference points of simple comparison or as illustrations of a perfected version of the earlier author’s aesthetic invention.

The clearest example of this is Virgil, who emerges here virtually as a lodestar for all earlier periods, but especially the Hellenistic and Republican. For academic readers taught to be suspicious of any kind of teleological view of history, this may seem like an intrusion of “fate” into the radical contingency of the real world, where, presumably, things could always have gone differently than they did.

But once again, Jenkyns is telling a story, one meant not only to be accurate, but also to generate its own sense of narrative exigency and intelligibility. Readers who first encounter classical literature through Jenkyns’ account may inevitably get the sense that Virgil is the final cause toward which earlier poetry is organically tending, and most modern philosophers of history would probably find such a view wrong-headed, but considering the real pedagogical merits of what Jenkyns is doing here, to say nothing of the charm and readability of his book, we may still feel that this anticipatory fallacy is a price worth paying.

Another feature of Jenkyns’ book that will certainly raise professorial hackles is the dismissive tone with which he talks about some ancient literature. Individual authors and whole periods come in for bitter censure or a sniffy cold shoulder. Consider Lucan: “No classical author of comparable talent is so often and so massively bad. He spends most of the time screeching at the top of his voice.”

Many 19th- and 20th-century readers and scholars would agree. It is only since the late-20th century that Lucan has become fashionable real estate for classical scholarship, which has found much that is interesting, beautiful, and congenially postmodern in his poetry. So scholars may resent Jenkyns’ betrayal of “our” poet, especially since his relegation sounds so much like the bad old days before we challenged the canon by teaching Lucan to undergraduates. In fact, most of us get the message as undergraduates that such evaluative criticism as Jenkyns is indulging in here is gauche, bigoted, or just beside the point of what we are supposed to be doing as readers.

But I don’t think it is beside the point, nor is it necessarily a matter of prejudicial taste-mongering. All good reading, ultimately, is aesthetically evaluative, whether explicitly or implicitly so, and it is to Jenkyns’ credit that his is out in the open. It is important for Jenkyns’ project that he come across as no mindless cheerleader for the ancients, but as a discerning critic, capable of both praise and blame.

His account cannot simply go from strength to strength without turning into a mushy eulogy of everything old, which would of course fail to do any of the things we want his book to do. What Jenkyns is cooking here needs some vinegar, and there must be at least one “Lucan” in his account; fortunately, he has several. For my part, I heartily disagree with what Jenkyns says about Lucan and was sorry to see him playing the whipping boy, but I must admit that I find this “cranky” Jenkyns particularly lovable and laugh-out-loud funny.

Sometimes, though, Jenkyns is not so much dismissive as blind to the most salient aspects of a text. For example, he clearly likes Aristophanes but finds him mostly fun and games. The portrayal of Socrates in “The Clouds,” he writes, “must be wildly unlike the real thing. The playwright’s aim, well achieved, is simply hilarity.”

On the culture war at the heart of “The Frogs”: “The contest which takes up almost half the play is essentially an entertainment.” This is disappointing, and it is an opportunity missed. Aristophanes’ plays are indeed funny, but they are also about ideas, and signaling as much to readers would be a good way to indicate why comedy has been an enduring literary form in Western theater.

Such missed opportunities are the exception, though. The overwhelming sense is of an author who knows how to speak to his target audience and finds just the right ways to economize presentation when there are so many kinds of things that could be said. His treatment of the “carpet scene” in “The Agamemnon,” for example, is clear and humane, brushing aside silly questions that have preoccupied so many and making room for the dramatic and moral profundity of this moment.

Or consider what he says about the Homeric epics: “They present a good world, in which men are godlike, women beautiful, the earth fertile and the sea full of fish. The sense of the world’s goodness is a part of the poem’s tragic character: there is so much to lose.”

This is the kind of thing I have felt reading Homer, but never thought in so many words, not with such concision and persuasive grace. It is the kind of thing one should want to point out to first-time readers of classical literature, or to people trying to figure out whether to re-read it, intimating as it does where they may find the beating heart in this poetry.

Robert Germany is associate professor of Classics at Haverford College. His research focuses primarily on ancient drama, and his book Mimetic Contagion: Art and Artifice in Terence’s Eunuch is forthcoming from Oxford University Press.