Freedom’s Detective: The Secret Service, the Ku Klux Klan and the Man Who Masterminded America’s First War on Terror

Battling white supremacy — by any means necessary — in the post-Civil War South. 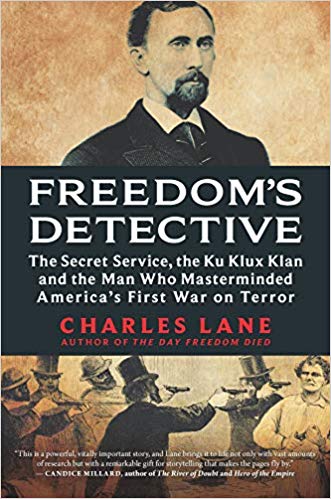 In Freedom’s Detective, Washington Post editorial board member Charles Lane intended to pen a fast-paced, warts-and-all biography of Hiram C. Whitley, the second director of the United States Secret Service and the man President Ulysses S. Grant entrusted to take the fight to the Ku Klux Klan, the white supremacist organization founded by ex-Confederates after the Civil War.

But despite its narrative pull, the book leaves behind the sinking feeling that this country’s racial strife will never end. Not only did Whitley’s efforts to kneecap the KKK during the Reconstruction era fail, but the extraordinary and often dubious investigative methods he and others justified in the name of the mission have endured, raising the question: Will we ever defeat racism in America when even overzealous policing has not worked?

To be sure, there have been victories. Between 1869 and 1871, when Whitley’s early Secret Service was most active, and periodically since, the government has had officers hell-bent on preserving what they saw to be justice deal grievous blows to those who threatened duly elected power. Their stories serve to remind us that the government is a collection of people, not some abstract body of laws and institutions.

Whitley was not self-effacing, abstract, or always law-abiding. Early in life, he swindled a business partner and helped ambush a fugitive-slave train while pretending to be an abolitionist. But he also was resourceful enough to be hired as a spy and a saboteur during the Civil War by Union general Benjamin Butler, who led Northern troops in New Orleans.

In 1868, Whitley was sent as lead detective to investigate the Klan’s murder of Republican politician George W. Ashburn in Georgia after local authorities and the Army officer commanding occupation forces there were unable to secure citizens’ cooperation. Everyone knew prominent locals were involved in the killing, but nobody offered evidence.

Whitley realized that, to solve the murder, Klan co-conspirators had to be turned against each other. So he held them separately and didn’t allow them to communicate. He threatened, he lied, he told suspects that the others had ratted them out, and he used torture — including aiming a cannon at one man to make him talk.

It worked. One of the poorer suspects broke down and agreed to testify against the rest, thereby demonstrating the effectiveness of a strategy that would be used in the 20th century to take down the mafia, and which is now enshrined in police procedurals such as “Law and Order.”

Still, Whitley was unable to secure the conviction of the Klan because he was overtaken by politics. Seeing guilty verdicts almost certain, area Democrats quickly organized to accept the Fourteenth Amendment (which granted citizenship rights to former slaves) in return for the federal government ending the martial law imposed since Ashburn’s death. This led Gen. George G. Meade to dissolve the military commission overseeing the murder case. Whitley didn’t view this as a complete defeat, though, believing the attempted prosecution of the Klansmen had sent a chill through the organization.

Soon after, the Internal Revenue commissioner asked Whitley to launch an undercover operation to stop a rampant counterfeiting operation based in New York. Whitley set up shop in Lower Manhattan, where he succeeded in smashing significant forgery rings.

However, in prosecuting a top counterfeiter boss, he faltered when the defense undermined his case by attacking the Secret Service’s evidence-gathering methods and Whitley’s own sketchy reputation, including his habit of using his position to curry favor with powerful officials. The jury returned a not-guilty verdict.

Hardly one to give up, Whitley engineered the publication of a book using the investigative files in his possession as chief of the Secret Service, which had the effect of rehabilitating the agency’s reputation and legitimizing its sometimes-underhanded investigative methods.

But victory proved elusive. Nineteenth-century America was steeped in the idea of limited government, particularly for tax and policing powers, shibboleths so hard-won from King George that the end of the Civil War saw a willingness to return to antebellum practices, undoing politically what had been wrested on the battlefield.

When congressional Republicans finally began to give teeth to Reconstruction-era laws, Whitley’s Secret Service came under the joint supervision of the Internal Revenue commissioner and the newly created Department of Justice, the latter of which had been established precisely to go after pro-slavery factions in the South.

With his team of 12 detectives, Whitley had managed to slow the spread of the KKK in South Carolina, Alabama, Georgia, and elsewhere, but, by 1873, Republicans began to run out of steam, and more Democrats were returned by voters to Washington as their states nominally acceded to the Fourteenth and Fifteenth amendments. Whitley left the Secret Service to start a hotel in the small town of Emporia, Kansas, where he lived out the remainder of his life.

There is little doubt that Whitley’s journey from teenage roustabout to leader of the Secret Service — by means of opportunism, daredevilry, quick-thinking, and bald-faced lies — is an incredible story of Yankee ingenuity and institution-building. And although Lane doesn’t explicitly draw the connection, it’s hard not to see Whitley’s legacy in the investigative apparatus the federal government has since erected.

Unfortunately, it is equally easy to see how the threat of white supremacy keeps emerging from America’s original sin of racial discrimination. The parallel existence of those two realities is disheartening. By declaring Hiram Whitley’s fight against the Klan America’s first “war on terror,” Lane is calling attention to the endurance of both legacies. That knowledge makes the fine narrative in Freedom’s Detective as sobering as it is compelling.

The Narrow Door: A Memoir of Friendship

A bittersweet look at the bonds shared — and shaken — by kindred spirits.

Blackboard: A Personal History of the Classroom

A baby boomer reflects on his life as a student.