Formidable: American Women and the Fight for Equality: 1920-2020

A dense, comprehensive look at an ongoing struggle. 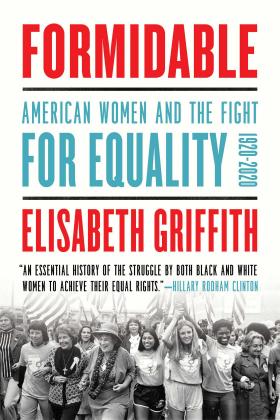 “When you start at barely any and advance to more,” Elisabeth Griffith notes near the end of Formidable, her compendious history of women’s rights, “the line on a graph tracking women’s progress might suggest dramatic improvement. If you amortize those changes over a century, the pace is slower and the line is flatter.”

The slow pace of women’s progress comes across viscerally in this meticulous, well-sourced volume, which at times feels like one very, very long lecture in an Introduction to Women’s Studies class. Griffith compiles names, events, and details into a relentless accounting of every gain and loss in the modern women’s movement, from the passage of the Nineteenth Amendment in 1920 to the election of the first Black, female vice president 100 years later. She takes particular care to show how white women, throughout this century-long journey, have used racism strategically to advance their rights while ignoring or attacking Black women, and how white privilege has repeatedly fractured the movement and thwarted its aims.

In a prefatory author’s note, Griffith explicitly addresses the past whitewashing of women’s history, presenting this book as a partial correction. She approaches the project carefully, explaining her choice of terms — such as capitalizing “Black” but not “white” or “brown” — and touching on positionality by describing herself as “a white, cisgender, feminist historian, writing about women who may or may not look like me.” Her goal, she explains, “is a multi-racial, inclusive chronology.”

It is a worthy aim, and the result is certainly inclusive, though the sheer volume of information the book presents tends to overwhelm the significance of individual contributions, including those of Black women.

Other recent books that focus more closely on the accomplishments of Black activists, such as Martha S. Jones’ Vanguard, have already done much to establish Black women’s rightful place in feminist history. The value in an historical survey like Formidable is the way it simply places Black women activists alongside their white counterparts and accords them the respect they deserve. It sets out, impartially and factually, the catalog of insults and betrayals they have faced.

Precisely because of its almost detached tone, Formidable comes across as an excellent book to share with white feminists skeptical of the value of concepts like intersectionality. The narrative’s general avoidance of judgment or even much analysis is compelling in its own way; one can argue about the ideal relationship between the Black Lives Matter movement and women’s rights, but the historical record is impossible to deny.

The National Women’s Party convention in 1921, for example, set legislative priorities that benefited white women by ensuring, in the words of an attendee, that anti-lynching laws were off the table and “all doubtful subjects, like birth control and the rights of Negro women, were hushed up, ruled out of order, or postponed.” White feminists have been indifferent to or even supportive of lynching for over a hundred years. We have their own words to prove it, and Griffith quotes and cites them like courtroom exhibits.

For readers already well aware of racism in the women’s movement, there is still much in this book that will inform and even amuse. It is startling to learn that Phyllis Schlafly, after almost single-handedly defeating the Equal Rights Amendment, expected Ronald Reagan to make her his secretary of defense, or that male NASA engineers, calculating how much additional cargo would be needed to support the first female astronaut, determined that Sally Ride required 100 tampons for a week-long mission.

Of course, Griffith also documents more significant historical events (whether these are revelations to the reader will depend, to some extent, on how many they’ve lived through). One such sea change was the GOP’s early support of the ERA and its later abandonment and then demonization of it — a shift that led inevitably to Republicans’ current fixation on controlling and punishing women. The Republican Party, Griffith shows us, was not always this way.

The author, an historian whose previous book illuminated the life of activist Elizabeth Cady Stanton, is partial to long paragraphs of declarative sentences without a lot of transitional language. This works well as a concise chronicle of the many cultural, political, and personal events that make up a century-long, national history. But this style can make it difficult to track the many threads Griffith is weaving together; the reader may occasionally wonder if they’ve missed some important connection between ideas, or if the author has simply drifted into non sequitur. Fortunately, the book is well-indexed, so if you come across a name you don’t recognize but suspect you should know, you can always look it up in the back.

“Until activist allies can increase their political power, secure racial justice, safeguard reproductive rights, insure equal economic opportunities, provide affordable childcare, and address historic inequities, the work of the women’s movement is not only incomplete, but at risk,” Griffith warns in the book’s final pages.

Today’s “more inclusive, intersectional feminism,” she states, is faced with “an equally committed opposition.” It’s a depressing thought made even more so when nailed to the end of 380 pages of exhausting struggle. Left unexpressed is the hopeful possibility that today’s white activists, through the acknowledgement of past harms, are better suited to vanquish the forces that gleefully endorse racism. Let’s hope it doesn’t take another century.

Susan Schorn wrote Bitchslap, a column on women and fighting, for McSweeney’s Internet Tendency, and is author of the memoir Smile at Strangers, and Other Lessons in the Art of Living Fearlessly, as well as the short-story collection Small Heroes.

The Legendary Detective: The Private Eye in Fact and Fiction

A scholarly look at fictional gumshoes and their real-life counterparts.