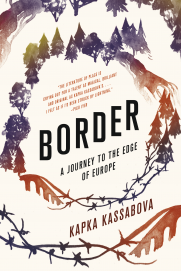 Kapka Kassabova — her name itself conjures the far-off regions where East and West, Asia and Europe meet in a coming together of cultures, which is the subject of her latest book.

Kassabova was born in Bulgaria and published, in 2009, Street Without a Name, (the first half of which was a charming, funny memoir of her childhood). When she was 16, she and her family emigrated to the West, just as the Berlin Wall was falling and communism was collapsing throughout Europe.

In Border: A Journey to the Edge of Europe, Kassabova returns to the southern Balkans 25 years after she left to meander around the boundaries of Bulgaria, Greece, and Turkey. Part of the lure was that the border areas were, during the communism of her girlhood, off-limits: "The closer you got to the border, the less your life was worth," she writes.

In ancient times, much of this territory was known as Thrace. Thracian cult sites and magnificent gilded tombs are still being discovered today, but the Thracians themselves are, Kassabova says, "perhaps the least known of the ancient peoples of Europe."

It’s fair to say that most contemporary Americans, including well-read ones, know as little about the history of the Balkans as they do about Thrace. As Kassabova deftly shows, it's complicated.

Vectors of human history have crunched and collided here in the manner of tectonic plates: The Ottoman Empire and Judeo/Christianity, paganism and Orthodoxy, Hellenes and Slavs and “Gypsies,” war and bloodshed, and maps that are, over a relatively short period of years, often being redrawn — sometimes by Western politicians who, like the 19th-century British Prime Minister Disraeli, Kassabova says, couldn't hold a map of the Balkans the right way up.

And the vectors still exist today. One Bulgarian border guard, old enough to know, tells Kassabova that, in the 1970s, "They ran the other way, south." (He meant East German fugitives and others seeking to escape the Iron Curtain, who tried to get to non-Communist Turkey via Bulgaria; now, Syrians and others seeking entry into the European Union are flooding north.)

Border is more than a travelogue, and good as Kassabova is at evoking history and geography, the best of her book highlights the civilizations which indeed clash, but just as often coalesce and meld.

This “coming together” happens in unexpected ways. Kassabova visits an Orthodox priest in Turkey who speaks what she calls "an endearing old-fashioned Bulgarian," and whose wife, born in Bulgaria, speaks "a careful Turkish."

Stranger still is Easter Mass, the celebration of the resurrection of Jesus Christ, where more than half of the congregants — "who stood and patiently listened to Alexander and Maria recite the arcane, sorrowful descants of Eastern Orthodoxy" — are Muslim.

In another part of her travels, Kassabova watches a group of women who, in an age-old ritual, take their religious icons — expressive and haunting paintings of the saints — to the river for washing. Instead of a prayer afterward, the women perform a ritualistic circular dance and, as Kassabova puts it, "The whiff of paganism was unmistakable under the burning incense of Orthodoxy."

Indeed, a leitmotif of Border is Kassabova's belief in the uselessness of nationalism. As she writes, "It just won't let people be."

On their own, people can usually live in something like harmony and mutual trust, she seems to be saying. It is when sultans, tsars, commissars, and governments impose their wills that the blood flows. Her book is not a celebration of borders; Kassabova prefers "our bitter, beloved, borderless Balkans."

Border includes a handsome hand-drawn map with pointers to the places the author visits, using her names for them, and the stories that ensue, such as "Felix's Cliff" and the "Spring of the White-Legged Maiden" and "The Village Where You Lived for Ever." Still, this is the kind of book that is fun to read with a world atlas near at hand — one of those oversized ones, hard to hold in your lap, with a complete place-name index.

Kassabova has an acute eye and ear for detail, and this is a marvelous book of travel stories, including a harrowing one, which is the climax of the book. Border, written by an author in her 40s, covers some of the same ground as the second half of Kassabova's earlier book, Street with No Name, written in her 30s. But the difference in outlook and authorial tone is evident.

As a native, she always knew of "the undercurrent of mysticism that runs through the Bulgarian psyche," and that "miracles felt as inevitable here as disasters." Where, in the earlier book, these manifestations of the otherworldly were presented with amused, affectionate, sometimes snarky skepticism, now, after these border travels, she concludes, "I wasn't so sure about all the things I didn't believe in."

Mark Gamin is a Cleveland lawyer and writer.