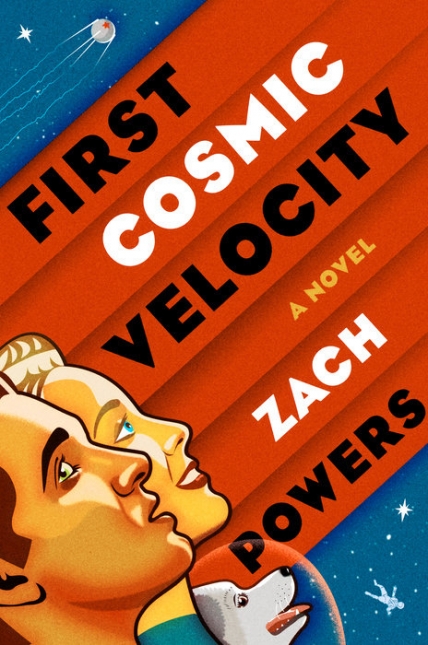 During the 1960s, I held simplistic if not stereotypic views of our Cold War rival, the U.S.S.R. Of its space program, I perceived monolithic secrecy, propaganda, and an intentional association between utopian socialism and its “victorious” space exploration by mythic Russian heroes.

In his debut novel, First Cosmic Velocity, Zach Powers plays on this link between that program and the Cold War. Using the likes of Khrushchev, space patriarch Konstantin Tsiolkovsky, and actual locations and events, Powers’ historical novel tells the story of the feverish intensity of launching cosmonauts into the heavens.

The author juxtaposes the “metaphoric twins” of the Russian steppe and orbital space with the real-life program of using human twins to guarantee the “success” of Soviet space missions. (With each cosmonaut having an identical double, unfortunate interstellar accidents could be concealed by having the survivor assume the doomed sibling’s identity.)

In Powers’ narrative, the twin at home, the cosmonaut kept on earth, basks in the public ovations of the program’s achievements, while the other — in orbit — incinerates during the inevitable botched re-entry.

As historian Asif Siddiqu observes, “With almost no exception, coverage of Soviet space exploits, especially in the case of human space missions, omitted reports of failure or trouble.” It turns out that it’s easier to launch a cosmonaut into space than to bring him or her back alive.

At the center of Powers’ novel are twins named Leonid; both are cosmonauts. One Leonid (not unlike the meteor showers of the same name) is orbiting toward a fiery death, while the other, at the Star City training center, is the public face on tour, harboring second thoughts and heretical doubts about his role.

Meanwhile, cosmonaut Nadya is herself a surviving twin. “She would always be the favorite. Russia’s first daughter. The Soviet ideal personified.” The Chief Designer, the program director and architect of the secret deception protocol, is the victim of the infamous gulags and the compulsions of five-year plans.

Unfortunately, the Chief Designer has run out of twins, as five cosmonauts have already died upon re-entry; only the Leonids remain. Thus, he must figure out how to successfully retrieve one Leonid from space — and keep the program operational — before the counterfeit is discovered and vicious political and societal punishments are levied.

Powers uses flashbacks to the Leonids’ childhood in Ukraine where, amidst mass starvation, they are recruited for the program. Their ethnic identity is erased; they are renamed and given false biographies. Their new lives are constructed by retraining that makes them puppets of the totally proscribed space program.

“The twins all had stories they told, but they were fabricated. It never occurred to Leonid that someone might have a real life, real stories to tell.” Nameless and voiceless, the twins become more victims than heroes. After all, in Russia, “a hero isn’t a person but an act.”

At the outset, I found the author’s use of official titles, the lack of real names, and the initial cardboard characterizations to be a potential liability. But as Powers develops the grounded Leonid’s earthly journey, we begin to discern a slow and steady reveal of the man’s skepticism, increasing self-awareness, and drive for connection and freedom.

Indeed, when Leonid and Nadya lose fellow cosmonaut Giorgi in a training accident, they journey to his funeral, a trip that becomes an allegorical escape from the gravity of Star City and the Baikonur Cosmodrome. In their new trajectory, they are pulled toward Leonid’s almost unrecognizable childhood home to discover truths about his brother and their family.

Leonid’s grandmother observes, “Even if [the twins] do return to the valley, somewhere else will be home, other people their true family. One can’t have two homes. One can’t be leaving and heading toward it both at the same time.”

Yet, at journey’s end, Leonid and Nadya find themselves in a familiar place. As the Chief Designer realizes, “Family is not necessarily the place where one is, but where one returns, given the chance.”

First Cosmic Velocity defied my predictions. I thought the novel was going to be a satirical narrative of conspiracy theories that would concretize my simple view of Russians. Instead, Powers’ story about identity, individuality, and family is quite moving. As orbiting Leonid says, “I like that what I have now is the only important thing. Even if it is not much.”