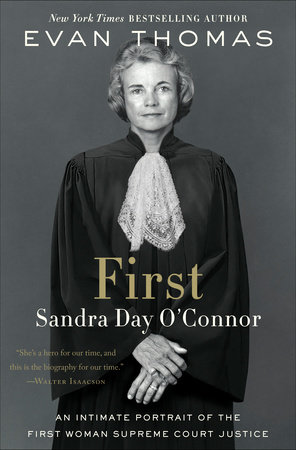 When Ronald Reagan nominated his new acquaintance, Sandra Day O’Connor, to become the first female justice on the United States Supreme Court, he described her to the American people as “a person for all seasons.” Evan Thomas’ stellar new biography, First: Sandra Day O’Connor, proves that President Reagan’s early assessment of his nominee totally hit the mark.

Indeed, for more than eight decades, she’s been the quintessential person for all seasons, who steadfastly played her roles with zeal, integrity, and high emotional intelligence.

The genesis for this book came shortly after O’Connor was diagnosed with dementia in 2014, while she still had some vitality and alertness. At that time, she and her sons decided they wanted an esteemed historian to write her biography, and to have her story told as the chosen author saw fit, without the family’s having any editorial control over its content.

To make the task easier for the selected biographer, they planned to open up her and her late husband’s files and introduce the author to the key people in her life, which would lead to a multitude of necessary interviews, including many with her fellow Supreme Court justices and law clerks.

Fortunately, they chose Thomas as the person most likely to “do justice” to O’Connor’s life and legacy. Though not a lawyer, he’s a graduate of the University of Virginia Law School; has been married for four decades to a fine attorney, Oscie Thomas, now his research and writing partner; worked 33 years as an award-winning journalist at Time and Newsweek, where he covered legal issues, the Justice Department, and the Supreme Court; and has written several critically acclaimed biographies.

Thomas’ education and experience pay off big time in First and provide the foundation for not only his fast-paced narrative but, more importantly, his cogent analysis of the most important cases addressed by O’Connor during her quarter-century on the nation’s highest court.

If James A. Baker III was “the man who made Washington work” during his 12 years of holding leadership positions in the Reagan and Bush 41 White Houses, then Thomas makes a convincing case for O’Connor’s being “the woman who made the Supreme Court work” during the two-and-a-half decades she worked in Washington, DC’s “Temple of Justice.”

Like her court brethren, O’Connor often displayed a forceful personality in attempting to produce decisions that aligned with her view. But what set her apart from her colleagues was how often she succeeded — being in the majority as the swing vote 330 times on 5-4 decisions, and very rarely in the minority.

Although ideological purists like Antonin Scalia criticized her as a mere “politician with legal training,” Thomas concludes that, with her skill set (which definitely included deft political skills), she became “the most powerful Supreme Court justice of her time,” serving as “the balance between liberals and conservatives” and keeping the court “centered” by acting as its “perfect bridge.”

To confirm the author’s conclusion, during her final decade on the bench, her outsized influence on American jurisprudence caused the media to identify our country’s highest tribunal as “the O’Connor Court.”

As the outcome determiner in the midst of her fellow Supreme Court legal geniuses, with their massive (and often fragile) egos, O’Connor’s drive and intellect functioned at their most tactful and pragmatic levels as she cobbled together court-opinion majorities with high frequency.

As the author recounts with delicious particulars, time and again, she prevailed in “getting to five” on complex cases by “avoiding emotional flare-ups and no-win fights”; “balancing realism and idealism”; “reconciling competing demands”; “refusing to retaliate”; “knowing the dynamics of the players”; and compromising when necessary to achieve a “better” result instead of no result, after recognizing that her perceived “best” result was not going to be possible.

Although Sandra Day O’Connor wrote a memoir of her childhood, Lazy B: Growing Up on a Cattle Ranch in the American Southwest, which she co-authored with her brother, Alan, she never managed to write a full account of her life. Instead, like George H.W. Bush did with Jon Meacham a few years ago, she and her family let an open-door assessment of her life rest in the hands of a master historian, in hopes he’d draw the right conclusions after reviewing all the evidence.

Evan Thomas has now proven he was worthy of the O’Connor family’s trust and has achieved a rare result for an author: a book that richly deserves the glowing endorsement on the front of its dust jacket, in which Walter Isaacson says of First that Sandra Day O’Connor is “a hero for our time and this is a biography for our time.”

Talmage Boston is a commercial litigator in the Dallas office of Shackelford, Bowen, McKinley & Norton, LLP. He is also an historian and his most recent book is Cross-Examining History: A Lawyer Gets Answers From the Experts About Our Presidents (Bright Sky Press 2016).