A newly dead teen falls for the strange young man guiding her to the afterlife. 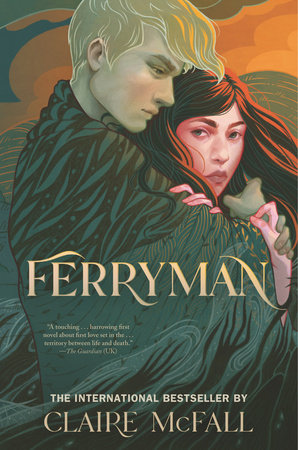 When teenager Dylan boards a train from Glasgow to Aberdeen to see her estranged father for the first time in years, she’s certain the momentous trip will change everything. What she won't realize until later is that she’ll never complete it; she dies when the train crashes.

Except Dylan somehow wakes up after the accident alone in the darkened wreckage, where "her imagination filled in the blanks, packing the route through the carriage with upturned seats, luggage, broken glass from the windows, and squishy, slick things that were solidifying in her mind's eye into limbs and torsos." Outside, there’s no sign of a rescue attempt; all she sees is a solitary, sandy-haired boy watching her.

It's clear that something is different about the cobalt-eyed Tristan, who does not "stand or even smile when he [sees] her looking at him" and "just continue[s] to stare." Yet as he’s the only other person in this isolated area, Dylan reluctantly agrees to follow him into the unwelcoming landscape.

She soon realizes that she’s not trekking across the Scottish Highlands with a startlingly attractive teenage boy, the kind who always "made her nervous" because "they seemed so cool and confident, and she always ended up getting tongue-tied and feeling like a total freak."

Rather, Dylan is dead and is traveling through the aptly named wasteland alongside her personal ferryman. As such, Tristan "guide[s] souls across the wasteland and protect[s] them from the demons" keen to devour young, pure souls like Dylan's. Along the way, he also "break[s] the truth to them, then deliver[s] them to wherever they’re going."

Tristan has shepherded more souls than he can count across the wasteland, a task that has become increasingly transactional as his trips blend into farewells:

"Each soul that waved goodbye at the end of the journey had taken a small piece of him with them, torn off a tiny piece of his heart. After a while, he had hardened."

As he reminds Dylan, everyone eventually must cross the wasteland, which he describes as "their own personal wilderness. It's a place to discover the truth that you have died and come to terms with it."

The wasteland is not a place to make friends or fall in love. But as they learn more about each other and themselves, Dylan and Tristan realize they’re not prepared to admit that reaching the end of their path will also mean their inevitable separation as she goes where he cannot follow.

First published in the U.K. in 2013 and nominated for the 2014 Carnegie Medal, Claire McFall's acclaimed debut novel, Ferryman, has finally made its way to the U.S. (with the rest of the trilogy, Trespassers and Outcasts, slated to follow). A movie adaptation is also in the works.

All the characters are white in this series whose worldbuilding is loosely inspired by the ancient Greek myth of Charon, the underworld boatman who ferries the dead across the River Styx. By heavily focusing on the drudgery of walking through the wasteland, McFall is slow to unpack Dylan and Tristan's mutual attraction, although both characters find something they lack in the other.

In spite of himself, Tristan appreciates Dylan's unique perspective and unexpected kindness to him when "most souls, when they discovered what had happened to them, were too absorbed in their own sorrow and self-pity to show much interest in this road between the real world and the end," much less in the ferryman guiding them through it.

After countless years spent trying to "look appealing" and trustworthy to his charges, Tristan is shocked to have the space to define himself as more than whatever the dead choose to project onto him.

Dylan, meanwhile, is used to feeling the limits of her agency as a teenage girl perpetually concerned with doing and saying the right thing:

“She was the shy, serious student. Quiet, diligent, but not particularly clever. All of her successes had to be earned through hard work, which was easy when you had no friends.”

In Tristan, she finally finds the appreciation she has long sought. In Dylan, Tristan sees “a soul worth protecting. A soul worth caring about. A soul that he wanted to give a piece of himself to.”

Although Tristan initially acknowledges the unequal power dynamic at play between himself (an ageless, supernatural being) and Dylan (an ordinary girl despite the high caliber of her soul), this imbalance is never fully explored. His initial hesitation to get close to her, since "as her protector, he would be taking advantage of her vulnerability if he acted on his feelings," shifts quickly to a heartfelt confession and shared anguish over their looming separation.

With the slog through the wasteland and the teens’ unspoken longing taking up much of the plot, Ferryman is slow to build to its dramatic conclusion. Luckily, the novel's final act offers tantalizing glimpses of what comes beyond the wasteland and what it might mean for both Dylan and Tristan. Readers will be excited to see these narrative aspects more fully explored in later installments.