This tour-de-force work of speculative fiction will make believers out of the genre's doubters. 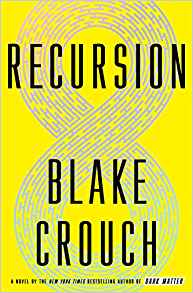 Every speculative-fiction author is a high-wire artist. But it’s even worse than that: No matter how high, windy, or impossible a circus stunt might be, a tightrope walker at least has terra firma anchoring the beginning and end of their journey. And they have a net.

Not so with the authors of stories that bend our recognizable world out of any shape we know. Not so for the writers who strain what if? to the limits of suspending disbelief. In speculative fiction, there is almost every way to get it wrong and so very narrow a thread to cross to get it right.

Blake Crouch carves out his own pedestal by getting it absolutely right with Recursion.

(Warning: This book is so good, I’m about to do that thing where the fizzy drink overflows its glass.)

Recursion follows a scientist, Dr. Helena Smith, who has pointed her powerful brain at the hope of using technology to help Alzheimer’s patients retain their memories, and Barry Sutton, a cop whose life is defined by memories of his daughter’s terrible death and the subsequent dissolution of his marriage.

When Helena’s research draws the attention of a visionary billionaire, his plan to develop her life’s work beyond anything she’d considered puts the fate of the world balancing on a string. And the spheres of planets, even more than high-wire artists, don’t teeter safely on a hair so fine.

At a modest 336 pages, it’s astonishing the amount of intriguing, adventurous, terrifying, emotional, philosophical, and even inspirational ground this book manages to cover. One might expect it would take a doorstopper stack of pages to convince us to play along with such a wild reach of make-believe. But Crouch wastes not a word, and at zero sacrifice of lyricism.

Case in point: Early on, we meet Gwen, Barry’s colleague and confidante, on the 11th anniversary of his daughter’s death:

“She slides off the stool and embraces him, the faint smell of sweat from her ride combining with the remnants of body wash and deodorant, resulting in something like a salted caramel.

“He says, ‘Thanks for checking on me.’

“‘You shouldn’t be alone today.’

“She’s fifteen years younger, in her mid-thirties, and at six feet four inches, the tallest woman he knows personally. With short blond hair and Scandinavian features, she’s not beautiful exactly, but regal. Often severe without trying. He once told her she had resting monarch face.”

Every character is just this clearly drawn, and each scene orients the reader with this kind of precision. The pedal gets buried in the floor from the first chapter, and there is no coasting anywhere all the way through to the epilogue.

One of the book’s most impressive achievements is that the hinge-pin technology driving the story is a fantastical extrapolation from a few crumbs of real-life scientific breakthroughs. Helena’s machine (and its application) is the big ask here, the thing you have to believe. It inspires each player’s greed or good intentions. There is no story without it.

If the presentation of the mechanics had been muddled, no amount of clever scene description and snappy dialogue could have saved Recursion. But the capabilities and implications of Helena’s invention are explained in a way that stays with the reader through every plot twist. We don’t doubt our understanding of it. We never have to double back to ask, Wait, how does all of this work again?

It’s almost impossible to overstate in a non-spoilery review how impressive this feat is. What “Inception” did for dreams, Recursion does for memories, but arguably a bit more cleanly.

And it kind of had to be that way because Crouch wasn’t content to come off merely undaunted by the task of mapping out a heady techno-thriller. No, he had to go for the throat. Or the tender heart, as it were. Threaded through the plot’s whiplash and satisfying turns is a love story so poignant and wrenching, it should rattle any armor against the mushy stuff.

Set both in contrast to and in concert with unimaginable-yet-believable horrors (seriously, if you think global death and destruction is as bad as it gets, do let Crouch’s imagination take yours out for some exercise), the partnership of necessity between our heroes carries this tale to its conclusion. Along the way, it blooms into an epic devotion between two people that holds lessons for us all to the very last page.

Recursion is reportedly already under development for Netflix by Shonda Rhimes and Matt Reeves, and that’s great news. But this feels like one of those times that there’s no besting what the author has put on the page. The screen version(s) will be good. Maybe even great. But I can’t stress enough how much you’ll want to take this on in book form first. It has instantly slotted into the ranks of the very best fiction I’ve ever read.

Blake Crouch may be a daredevil, unafraid of any speculative heights, but he’s an incredibly talented writer and thinker, too. His surefootedness with the spectacle that is Recursion is well worth every ooh and aah it collects. Bravo.

Jamie Mason, originally from the Washington, DC, metro area, is author of the novels Three Graves Full, Monday’s Lie, and, most recently, The Hidden Things, all from Simon & Schuster’s Gallery Books. She lives and writes in the mountains of Western North Carolina.