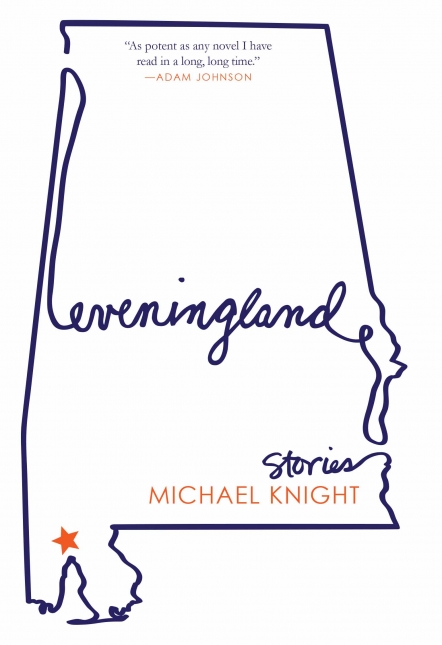 The seven stories in Michael Knight’s latest story collection, Eveningland, are set in and around Mobile Bay, Alabama. Apart from the setting, the stories, all published previously, are connected by a few recurring characters and, more importantly, by recurring themes.

The book begins with an epigraph from Walker Percy’s The Moviegoer: “It should be quite a sight, the going under of the evening land. That’s us all right. And I can tell you, my young friend, it is evening. It is very late.”

Michael Kobre, in Walker Percy’s Voices, tells us that the speaker here, Aunt Emily, is referring to the disintegration of the Old South. That disintegration is evident in Knight’s stories. But the evening land is also “going under” literally, as a hurricane bears down on Mobile in the book’s concluding novella.

The opening story, “Oil and Water,” told from the point of view of an old-timer who lives on a houseboat, focuses on a teenager who joins the battle against the Deepwater Horizon oil spill. Despite their age differences, they both know “that it was already too late,” but the boy, Henry, loves the place as much as the old man does and is willing to fight to save it. In the end, he has to face the fact that things will never be the same.

This sense of disintegration is also evident in “The King of Dauphin Island,” in which the protagonist, a wealthy widower, laments the tacky development that has overwhelmed the island and makes plans to restore its pristine state.

“He pictured houses tearing themselves down and hauling their parts away, the wind and tides giving back the beach, Dauphin Island rising unblemished from the Gulf like time-lapse film run in reverse.” When his daughters fail to understand what he’s trying to do, they take legal action to stop him, thereby accelerating the collapse — his own and the land’s — he was trying to avoid.

In the collection’s last story, “Landfall,” with the Old South already failing, a hurricane erases what’s left. An old man hunkers down in his decrepit cabin, waiting for the end. “The wind whipped past him on the stairs, stinging wet, surprised and angry sounding, he thought, at meeting no resistance. It had already taken his screened porch, the roof above his bedroom…[T]he bathroom was little more than a corrugated tin amendment to the kitchen and the storm had snatched that away as well.”

But if the South is disintegrating, some characters in these stories show great strength in the face of that decline, and a reader who looks for characters who grow and change during the course of a story won’t be disappointed.

The best example may be in “Landfall.” Hurricane Raphael (not to be confused with the historical Hurricane Rafael, which in 2012 came nowhere near Alabama) is bearing down on Mobile Bay. Adult siblings Doodle, Angus, and Percy all have their insecurities, but as danger approaches, they each mature and shine.

“Oil and Water” centers on a teenager who is worried about what an oil spill will do to his beloved waterways. But he’s also obsessed with a girl, described by a neighbor as “the trashy one,” with whom he seems entirely incompatible.

“Smash and Grab” is about a burglar who breaks into a house and is clobbered with a toilet lid by a young girl who then manages to duct tape him to a chair. “Jubilee” is about a man celebrating his 50th birthday party — his jubilee — but the term also refers to the shallow water swarming of shrimp, crab, and flounder that occurs in the summer only in Mobile Bay.

While Mobile Bay does play an important part in the stories, and most show the characters interacting with the water in one way or another, the setting doesn’t ever become the looming presence it is in some well-known story cycles like Dubliners or Winesburg, Ohio. And Alabama never quite comes to life the way it does in, say, Rick Bragg’s My Southern Journey. But maybe that’s the point. It isn’t the Southern landscape that’s disintegrating, after all. It’s the Southern way of life.

With both suspense and humor, Knight explores “the going under of the evening land” in this diverse collection. A thought-provoking and deeply satisfying reading experience, Eveningland evokes the Old South without sentimentalizing its loss. Yet its characters, and the reader, too, know that it’s evening. And it’s very late.

Clifford Garstang is author of the novel-in-stories What the Zhang Boys Know, winner of the 2013 Library of Virginia Literary Award for Fiction, and a story collection, In an Uncharted Country. He is also editor of Everywhere Stories: Short Fiction from a Small Planet, Volumes I and II, anthologies of stories set around the world.