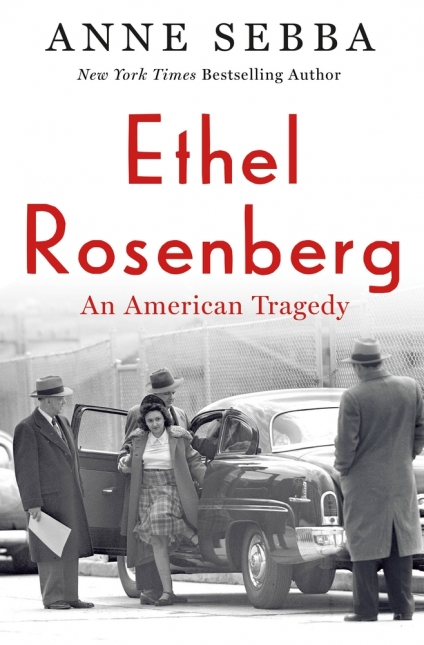 In her new biography, Anne Sebba makes a convincing case that Ethel Rosenberg — put to death for being a Russian spy in 1953 — was innocent of the charges leveled against her by the U.S. government. Sebba sets out to prove that Ethel was little more than a dowdy, albeit politically aware, New York City housewife and mother.

Ethel’s tragic flaw, in Sebba’s view? Harboring an outspoken, cloud-cuckoo-land vision of Soviet national promise. And when it comes down to the crunch, Ethel simply stands by her man — although husband Julius was himself almost certainly a recruiter of American spies for Moscow.

So, Ethel stoically follows Julius to the electric chair amid a jittery squall of Cold War dread. There’s nothing in the formal record to convict her beyond runaway national paranoia, breathless speculation, and the likely perjury of her brother, a confessed co-conspirator brought to justice, though non-lethally, for the same offense as the Rosenbergs.

Ethel Rosenberg: An American Tragedy focuses tightly on Ethel’s life and death, filling out a haunting portrait of a first-generation Jewish American born into squalid poverty on Manhattan’s Lower East Side. We trail her from infancy to a drably conventional marriage and on through to her electrocution. Along the way, thanks to Sebba’s marvelously gripping narration, we encounter a raft of pivotal individuals — familial and jurisprudential, obscure and politically prominent — arrayed to save Ethel or, on the opposing side, determined to hasten her demise.

Her co-conspirator brother, David Greenglass, is a shocking exemplar of the latter type. A singularly unremarkable fellow, he dodges the chair by peddling an accusation against Ethel that saves his own wife from indictment. And there’s Ethel’s immigrant mother, Tessie. Illiterate and marginally conversant in English, she seems numb in the face of her daughter’s gathering fate, not to mention insensate to the grim future of her two Rosenberg grandsons. Tessie invests all her support in son David and his family, urging her daughter to wise up and finger Julius, saving herself. In the days after Ethel’s execution, Tessie calls the FBI to underscore that her daughter was a “soldier of Stalin.”

The broader national mood attaching to the Rosenberg case, Sebba reminds us, is fraught with high-pitched outrage and patriotic sloganeering. Red Scare frenzy, after all, stems from the nation’s shared dread of a fiery Soviet blitz descending through cloudless skies and wailing sirens.

In this context, consider the judge in the case, Irving Kaufman, addressing both Rosenbergs from the bench before delivering their death sentence. If His Honor wanders a bit outside the strict judicial scope of the charges before him, it’s in keeping with the national zeitgeist:

“I consider your crime worse than murder…putting into the hands of the Russians the A-bomb years before our best scientists predicted Russia would perfect the bomb has already caused, in my opinion, the Communist aggression in Korea.”

Two presidents, and even former First Lady Eleanor Roosevelt — a hyper-liberal and highly influential voice in the 1950s — take a pass on calling for judicial mercy for Ethel despite the borrowed cachet Ethel accrues as an American mom. Even J. Edgar Hoover, that relentless anti-commie crusader, worries about the optics of executing a mother of two but eventually sides with the consensus of the empowered.

The Rosenbergs’ father-and-son defense team often seems unequal to the task of defending the couple, overmatched in court and a bit complacent about both conviction and sentence. Facing off against them is a skilled prosecution team. Among its junior members: Roy Cohn, making his bones as a Red hunter and soon to trade up to a role as staff counsel in Senator Joe McCarthy’s infamous witch hunt.

Ethel Rosenberg is richly illustrated, adding to the authenticity and vigor of Sebba’s densely peopled narrative. The endnotes and deep bibliography are equally essential to our full understanding of Ethel’s path to the electric chair and the national circumstances that made it possible, however outrageous the saga may seem in 2021.

The case of Ethel Rosenberg and its attendant context — cultural, political, borderline imaginary — have much to teach us today, when balanced and objective truth seems to repel so many Americans.

This is not just history, but a cautionary tale.