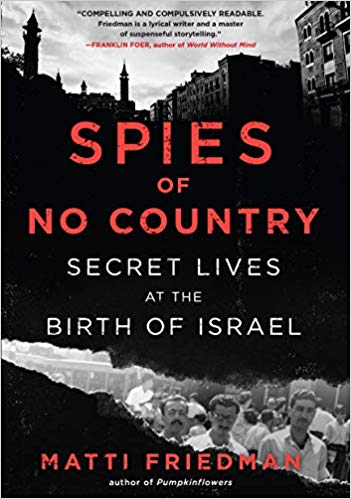 Like its subjects, Matti Friedman’s Spies of No Country: Secret Lives at the Birth of Israel is more than just its “cover story.” Yes, on the surface, it’s an engaging spy saga. Beneath that, though, lies an examination of identity and the humanity behind both sides of the ongoing Arab-Israeli conflict.

For those who require it, a brief history. In 1948, after over 20 years of British rule of Palestine, the United Nations proposed a partition plan calling for independent Arab and Jewish states. Even before the May 1948 British withdrawal, fighting broke out among the occupied parties. To help wage this and the subsequent War of Independence, Israel would need spies able to blend in with its neighboring enemies.

With this, Israel’s “Arab Section” was born.

Throughout the book, Friedman follows four of the organization’s spies — Gamliel, codenamed Yussef, Isaac/Abdul, Havakuk/Ibrahim, and Yakuba/Jamil — as they operate between Haifa and Beirut, gathering intelligence and engaging in sabotage.

What’s a spy story without a little intrigue? Two adventures feature prominently in Spies. In the first, Friedman relates the Arab Section’s effort to stymie Arab forces who planned to detonate a car bomb using a camouflaged ambulance. In page-turning detail, he tells of the spies’ subterfuge, sneaking a car bomb of their own alongside the ambulance so that they might blow it up before it could wreak its terror.

Friedman chronicles the painstaking efforts the spies undertook during the operation, from stealing a car, to assembling the bomb, to ultimately winding their way through risky checkpoints. No spoilers here — I’ll let you read for yourself the outcome.

In another episode, our spies are confronted with a symbol of recent horror. A yacht once belonging to Hitler sat in Beirut’s harbor, awaiting delivery to Egypt’s King Farouk. Furious wire traffic was exchanged between the Arab Section and its handlers, and plans were laid, culminating in a daring attack on this ship that served two separate enemies of the Jewish people. Again, you’ll have to read the book to find out what happened.

Friedman gives us a glimpse into how one’s identity impacts one’s destiny. He reports that, “In the 1940s, nine out of every ten Jews in Palestine came from Europe.” The remainder was of Arab descent, and thus much valued as spies. Not that members of the Arab Section considered themselves spies, a term they found dishonorable. Rather, they were mista’arvim, “ones who become like Arabs.”

Such passing did not come without pressure. In the words of their teacher Sam’an:

“You must be a talented actor playing the part twenty-four hours a day, a role that comes at a cost of constant mental tension, and which is nerve-wracking to the point of insanity.”

The result in several cases was the spies becoming what they pretended to be. Gamliel, for one, found himself identifying more with the political viewpoints of the Arab neighbors he was impersonating. He “felt himself adopting the personality of the people around him, seeing things their way.”

As for Isaac, his cover story as a shopkeeper actually occupied more of his time than his work as a spy. He spent hours in his store, “selling sandwiches and erasers to schoolchildren, playing a bit part in the life of the Lebanese capital.” While his customers and wares were real, Israel was merely a concept. “The Jewish state...was just clicks through a radio.”

At what point does your fictional identity become your reality?

And what of their Arab counterparts? After the November 1947 United Nations vote calling for a two-state partition, “The Jews had rejoiced like a drowning people thrown a plank, the Arab world responded with the fury of a civilization dealt one humiliation too many.”

Even Gamliel, of the Arab Section, warned that the Arabs “weren’t going to come to terms with their loss” and were “convinced it would be better to die in battle than leave their homeland.”

While Israel celebrated, its Arab neighbors suffered immensely, not just the loss of pride, but the loss of a land they considered theirs. That the 1948 war that resulted in a free Israel bears two different names — “War of Independence” by the Israelis and “the Catastrophe” by the Arabs — says much about the nature of history. How we define it is a result of how we survive it.

This dual viewpoint is made heartbreakingly clear when Isaac coincidentally meets the father of two sons who died in one of his attacks. What do you say to someone you have personally and tragically wronged in the pursuit of a larger cause?

Ultimately, Gamliel, Isaac, Havakuk, and Yakuba were unknown until now because they were not caught and thus escaped greater renown. Matti Friedman does us, his readers, a great service not just in bringing their exploits to light, but in sharing with us insights into how they impacted history and the region.

The News: A User’s Manual

A thought-provoking look at how today’s news stokes our fears and exploits our weak hold on a sense of perspective.