Enduring Courage: Ace Pilot Eddie Rickenbacker and the Dawn of the Age of Speed

A WWI hero gets his due as he climbs from school dropout to aviation ace. 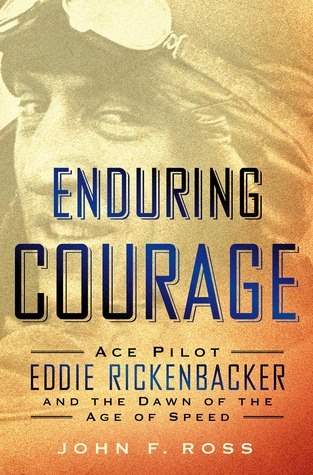 Does anyone remember Erich Hartmann, the leading German flying ace of World War II? For that matter, the name of Major Richard Bong, the leading American ace of that war, will not strike much of a chord with his 21st-century countrymen, either.

Ninety-six years after the guns fell silent on the Western Front, however, we remember the men who fought, lived, and died in the first air war high above the trenches. The names of Manfred von Richthofen, René Fonck, Billy Bishop, Edward Mannock, and Georges Guynemer continue to resonate. Eddie Rickenbacker is one of that company.

In Enduring Courage, John Ross gives us a lively and engaging portrait of Rickenbacker, an American icon firmly situated in the 20th-century infatuation with technology, speed, and flight. He was a man who struggled to overcome obstacles that began with an impoverished childhood.

When his abusive father was killed in a brawl, the undersized 13-year-old dropped out of the seventh grade to support his family, working as a laborer, molder, cobbler, stone cutter, and lathe operator before talking his way into a job in a garage, where he began his love affair with the internal combustion engine.

Rickenbacker’s mastery of the technology that would put Americans on the road enabled him to diagnose problems simply by listening to an engine and to repair most anything that went wrong. At 16, he jumped at the chance to become a riding mechanic for a racing team. Within a year, he had signed up for a correspondence course in engineering and was put in charge of the design and construction of a racing car.

A decade later, he was a veteran of four Indianapolis 500s and one of the best-known drivers and team managers in auto racing. While supremely confident in his command of roaring machinery, he was unwilling to ignore the old country folk wisdom of his Swiss-born parents, superstitiously tying the bleeding heart of a freshly killed bat to his middle finger before starting a race.

After enlisting in the U.S. Army, Rickenbacker served as a driver for the likes of Generals John J. Pershing and Billy Mitchell, earned a commission as an engineering officer at an Air Service facility, and convinced his superiors to send him to flight training.

At 27, he was older than most novice aviators and suffered from a black spot in one eye that limited his depth perception. Many of the youngsters with whom he flew — including the son of an ex-president of the United States — came from privileged backgrounds and had some initial difficulty accepting an older man with rough edges, a salty vocabulary, and grammar that lacked a university polish.

His engineering skills, nerve, self-confidence, and competitive spirit, though, soon won them over. Between April 29 and October 3, 1918, Rickenbacker rose to command the famed 94th Pursuit Squadron, scored 26 solo victories (and shared four more with other pilots), and earned the Medal of Honor and the title “America’s Ace of Aces.”

Author Ross has a real gift for sitting the reader beside “Fast Eddie” as he thunders down the straightaway of a 1913 racetrack or leans forward in the cockpit of a Nieuport 28 climbing toward a flight of Fokkers. “A very tricky little airplane to fly,” one of Rickenbacker’s comrades explained.

It seems a fair enough assessment for an aircraft prone to shedding the fabric of its top wing when pulling out of a dive, a terrifying problem that Rickenbacker experienced on one memorable occasion. The rotary engine spinning away on the nose was either on or off. In order to control his speed on landing, the pilot had to operate a “blip switch” on the control column, which interrupted the ignition.

“Danger lurked for the pilot who pressed it too long,” Ross reminds us. While the engine was off, fuel continued to flow, building up in the cowling. “Start the engine with too much unconsumed fuel lurking there and the spark would touch off a fire, never a good idea in a plane made of shellacked fabric and wood.”

The author continues, “You flew the engine as much as you flew the airplane,” noting that the pilot served as the carburetor, manipulating levers in the cockpit to control the flow of fuel and air to the engine. Even when the aircraft and engine were running perfectly, the pilot — stuffed into a narrow, open cockpit — still had to battle hypoxia, bitter cold, and altitude sickness, not to mention nausea resulting from the castor-oil lubricant spraying back from the engine.

And that was before they started shooting at you.

This is an admiring biography. Ross slides quickly over Rickenbacker’s Depression-era political battles with the Roosevelt administration, focusing instead on the indomitable spirit that enabled him to survive his early careers as a speed demon and ace fighter pilot, as well as the terrible injuries suffered in a 1941 crash of one of his own Eastern Air Lines planes and a 24-day ordeal drifting on a life raft in the Pacific during WWII.

Enduing Courage offers a compelling portrait of an American hero, the man who established the mold for the intrepid aviators who would follow, from Charles Lindbergh to Chuck Yeager and Neil Armstrong. Following the rise of Eddie Rickenbacker from urban poverty through the machine shop, racetrack, and cockpit to the front office of a great corporation is to watch the coming of age of modern industrial America.

Tom D. Crouch, senior curator of aeronautics with the Smithsonian’s National Air and Space Museum, is author of The Bishop’s Boys: A Life of Wilbur and Orville Wright, and more than 15 other books on the history of flight technology.