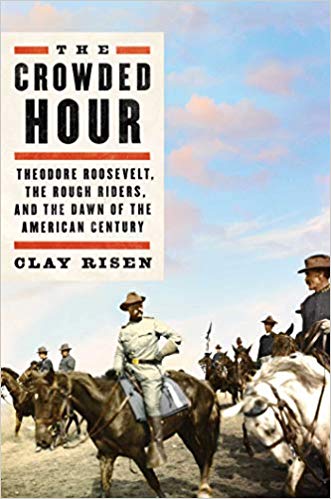 Malcolm Gladwell burst onto the world stage in 2000 with his book The Tipping Point: How Little Things Can Make a Big Difference. In it, he defined a tipping point as “the moment of critical mass, the threshold, the boiling point [when] ideas, products, messages, and behaviors spread like viruses,” and said such a moment is “heavily dependent on the involvement of people with a particular and rare set of social gifts” who become “agents of change.”

In his new book, The Crowded Hour, Clay Risen makes a strong case for the proposition that the Spanish-American War of 1898 was American foreign policy’s tipping point for what followed in the 20th and early 21st centuries, with Theodore Roosevelt and his Rough Riders as the change agents.

The war had texture. On the one hand, Risen sees a dimension of it as “a half-baked, poorly executed, unnecessary conflict that pushed an immature military power onto the world stage — or alternatively, as a ham-handed land grab with a sugar coating of idealism.” Such assessment, though accurate, does not tell the full story.

On the other equally accurate hand, he recognizes that the United States’ victory over Spanish forces in Cuba lifted America out of its “psychic crisis” that had sprung from the economic depression which began in the early 1890s and also inspired a national post-Civil War reconciliation as men from all parts of the country fought side by side to liberate impoverished Cubans from Spanish rule.

By entering its first foreign conflict since the Mexican War, the United States sent a message to the world that, in the coming century, our country would be something more than people removed from the rest of the globe on a landmass bounded by two oceans. Rather, we would seek to epitomize an “idea” (in our eyes, an “ideal”) and promote/impose our “liberty experience” values upon downtrodden people outside our borders who appeared in need of them.

The original motives behind the policy of pushing our values abroad, embraced by most American presidents since McKinley, were not totally clear. Did it become our guiding principle because of purely humanitarian reasons? Or was America’s intervention an imperialistic power play? Or were both rationales intertwined such that the motives merged?

Answers to these timeless, recurring questions have varied over the last 121 years, but Risen makes a tight argument that the conversation started with the Spanish-American War.

Regardless of the motives or prudence of the policy, the appeal of becoming the world’s policeman began in 1898 with Theodore Roosevelt and his soldiers in the 1st U.S. Volunteer Cavalry regiment called the “Rough Riders,” who were named after an act in Buffalo Bill’s Wild West Show. In the annals of American history, no group has ever received more glory for spending so few days in combat.

Thanks to the love affair between their leader and most newspapers at the time, the Rough Riders received instant fame from an avalanche of positive publicity beginning with their five weeks of training in San Antonio, followed by two weeks of drilling in Tampa, and, finally, 45 days in Cuba highlighted by their “reckless daring” during the “crowded hours” at Las Guasimas on June 24th and San Juan Heights at the Battle of Kettle Hill on July 1-2, 1898.

Their celebrity came at a steep price. During their brief stay in Cuba, the regiment of 600 men endured more losses than any other American unit in the war. By July 4th, only 300 were left alive and unwounded; by August 2nd, only 175 still qualified for active duty as they boarded the ship to return home.

The straw who stirred the Rough Riders’ drink, of course, was Roosevelt. Throughout the book, the author describes Roosevelt’s unrelenting obsession with pursuing battlefield glory. Perhaps it flowed from TR’s embarrassment over his father’s failure to join the Union Army during the Civil War. To right that wrong, he would have to “cut a notch in the stick that stands as a measuring rod in every family.”

As America’s prospects for entering the fray in Cuba commenced after Spanish soldiers started fighting the rebels in 1895, Assistant Secretary of the Navy Theodore Roosevelt and his new best friend and fellow “adventure junkie,” Leonard Wood, announced their intention to lead a volunteer militia unit if and when the U.S. declared war.

As reports began streaming in from Cuba describing the locals’ dire circumstances, Roosevelt ramped up his rhetoric about the need for “soldierly virtues” and “manliness,” expressing his desire for the United States to join the fight so he could put on his uniform, holster, and scabbard.

When the battleship USS Maine exploded in Havana Harbor on February 15, 1898, Roosevelt and William Randolph Hearst did their best to feed the country’s vengeful mindset, claiming that the Spaniards had destroyed the ship, and were not bothered by the flimsy evidence that supported their allegation. The men’s efforts soon achieved their goal. Two months after the Maine went down, President McKinley blockaded Cuba and, a few days later, Congress declared war on Spain.

America’s military force at the time was so inadequate that to have the critical mass needed to fight a war required forming three volunteer units. Secretary of War Russell Alger chose Roosevelt and Wood to lead the first one. Legions stepped forward instantly with stars in their eyes, hoping to gain glory in the unit already getting most of the publicity.

It didn’t take the media long to turn the Rough Riders into a “quintessentially American story,” with their diverse ranks made up of cowboys, farmers, athletes, and bluebloods. Given the country’s segregated status at the time, they comprised only white males, though during their combat days in Cuba, they fought alongside other regiments’ African-American soldiers.

Risen does a particularly good job of detailing Roosevelt’s exceptional leadership of his men during their four months together. Among his best traits were his total lack of pretension marked by a willingness to work, march, and sleep in the same harsh conditions as his troops; his knowing when to enforce and when to relax discipline; his fearlessness in being first to charge into battle; his making sound decisions in an instant; his poring over books on military tactics onboard the ship to Cuba; his finding food and water for his unit in the field when they needed it most; and his staying positive and minimizing demoralization amidst the ravages of war.

For those who enjoy stories of bona-fide patriotism, valor, and sacrifice, The Crowded Hour fills the bill. Though their time together was short, Theodore Roosevelt and his Rough Riders made their mark on history by playing a key role in the United States’ victory in the Spanish-American War.

By doing the right thing at the right place and time, they struck a match that helped ignite the bonfire which raged from time to time throughout the world from 1900-2000, causing that extended block of time to become known as the American Century.

Talmage Boston is an historian and lawyer in Dallas, Texas, whose first book was 1939: Baseball’s Tipping Point (Bright Sky Press, 2005).

The two cities are once again pitted against each other, but the result is less blood match than choreographed ballet.