Empire of Deception: The Incredible Story of a Master Swindler Who Seduced a City and Captivated the Nation 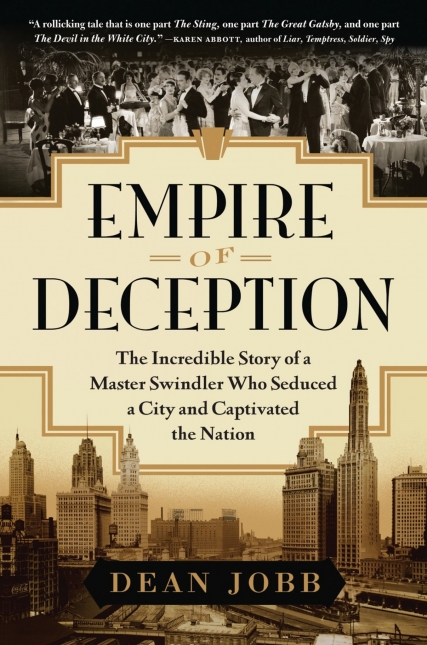 We're all suckers for a swindle.

Since the days of riverboat swindlers and frontier land shysters, Americans have been captivated by “successful” men who possess the Midas touch and offer us a chance to join them in their wealth. Confidence men like Charles Ponzi in the 1920s and more recently the infamous Bernie Madoff, who bilked over $18 billion from gullible investors, are an ingrained part of our get rich quick capitalist culture.

In Empire of Deception, Dean Jobb, a Canadian journalist, has written an intriguing story of the rise and fall of Leo Koretz, a Chicago-based swindler in the 1920s. It was a time when that city was plagued with gangland violence and everything in Chicago seemed for sale — from judgeships and other political offices to phony stock in oil companies. Hardly a scandal or murder in Chicago in the 1920s is omitted in this book.

Also, Chicago at this time was the home of the great industrial titans — George Pullman of sleeping car fame, Samuel Insull, the utilities king, and the great retail baron Marshall Field. Wealthy men were god-like and worthy of emulation. Greed and the market place did the rest.

During a career that lasted several decades Leo Koretz orchestrated dreams of overnight wealth in rice field land speculation in Arkansas and timber and oil wealth in Panama. As Jobb notes, in terms of the scale of frauds, staying power, and sheer audacity, Leo Koretz ran a marathon of 1920s pyramid-building swindles. In comparison, Charles Ponzi’s postal coupon scheme was a mere hundred-yard dash.

Leo Koretz’s descent into the world of the confidence man began innocently enough. He was a young “night school” Chicago lawyer, a family man, and an immigrant from Bohemia. He liked the good life of parties, social climbing, and champagne nights and needed money fast. So he began to sell phony real estate mortgages to friends, and even his own brothers and mother. The mortgages supposedly paid a high rate of interest.

Once the cycle began, Leo needed more investors to keep the fraud going. Soon he said he was “churning out fake mortgages like street car transfers.” Like Bernie Madoff, Koretz never used the hard sell. In fact he discouraged investors. In Jobb’s words he was a master of “negative salesmanship that inflated demand by making the shares hard to get.”

Ever in need of money, Leo Koretz unfolded a brilliant sting — a fake discovery of vast timber reserves and oil resources along the Bayano River in Panama. Koretz’s image as a gregarious lawyer and epitome of financial rectitude helped him capture a fortune in investment capital. All that was necessary was a smile and a casual comment that his petro-investments in Panama were producing millions of barrels of oil. Chicago’s best and wealthiest families raced to buy stock in the Bayano Syndicate.

Leo Koretz, they commented, was the “wealthiest Jew in Chicago” and his investments promised a solid return of 10 percent! By offering Bayano as such a profitable and solid investment, no one would need to go to distant and jungle-ridden Panama to look after their investments.

Leo Koretz’s gilded life in Chicago was the talk of society. With a mansion at the best address, a vast store of prohibited booze, flash cars and plenty of society women to flock around him, he reached the pinnacle of success.

But Koretz knew his pyramid scheme could not last. He began to have trouble financing his lush lifestyle, keeping expensive mistresses on the side, and making $50,000 dividend payments on Bayano stock. Also, at age 44, Koretz was suffering from severe diabetes.

When several investors expressed interest in visiting their holdings, he sent them to Panama with full knowledge that they would find that Bayano was a sham — nothing but swamp and alligators. Meanwhile Leo closed his operation and fled to Nova Scotia where he created a new identity for himself, bought a seaside mansion and gathered new mistresses and friends to join him in his flamboyant lifestyle.

As the tale of Koretz’s swindle unfolds we meet his alter ego, Robert Crowe, a Chicago District Attorney and Judge who once worked in the same law office with Koretz. Crowe’s contacts with the Chicago underworld were legion and helped him rise in politics. By going after swindlers and fast buck artists, Crowe deflected many of the public criticisms of Chicago’s corrupt politics. After the visit to Panama, Koretz’s investors sued for fraud and Crowe was happy to have Leo extradited back to Chicago after a Halifax citizen unmasked him.

In court Koretz pleaded guilty and admitted to having netted over $2 million over the course of nearly two decades from 1915 to 1924. He was fuzzy on details; but most of it seemed to have been spent on his own flamboyant lifestyle. Koretz conned $459,000 from Henry Klein, one of the wealthiest businessmen in Chicago. Klein ultimately recovered only $73,000. Klein’s loss in today’s dollars amounted to the equivalent of $6 million.

Both Koretz and his prosecutor, Robert Crowe, became national media stars as America followed the swindler’s tale with rapt attention. Public outrage followed when Leo Koretz received a light one-year sentence. After gorging on a box of chocolates smuggled to him at Joliet Prison, Koretz died of diabetic shock 34 days into his sentence — escape by suicide.

John R. Wennersten is emeritus professor of American history at the University of Maryland, Eastern Shore. He is currently a consultant at the Smithsonian’s Anacostia Community Museum. His recent books include Global Thirst: Water and Society in the 21st Century and The Historic Waterfront of Washington, DC.