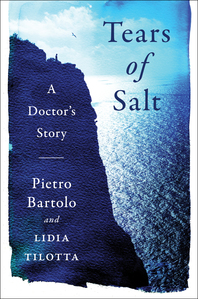 A hundred miles off Italy’s southern coast is the island of Lampedusa, the first port of call for hundreds of thousands of African and Middle Eastern refugees. They flee terrorism and war for Europe and a better life.

For 25 years, Dr. Pietro Bartolo, who runs Lampedusa’s sole medical clinic, has cared for the living and dead. Tears of Salt: A Doctor’s Story is a compelling memoir of Bartolo’s life and work, an intimate portrait of the unremitting refugee crisis and a man with a message: “We can’t and we won’t be governed by our fears.”

Bartolo, an always-on-call OB-GYN, speaks with urgency of his life and the lives of those he treats. The resulting narrative illustrates the indissoluble human bond between a local fisherman’s son turned doctor and his patients. Bartolo, along with Lidia Tilotta, a journalist with RAI Regional News and the Mediterraneo newspaper, renders this remarkable story in short, swift strokes.

Like living case studies, the accounts move from chapter to chapter at breakneck speed. This is the labor of those who seek healing and justice for refugees, the people with shattered worlds, whose lives hang in the balance.

The book’s straightforward style evokes the clinic’s persistent tide of death and life, setbacks and progress. Each chapter’s laser-like focus reflects the doctor’s single-minded approach to his calling, making each tale distinct from, yet connected to, the rest of the book.

Despite the complex subject matter, the translation of Tears from the original Italian uses clear, accessible prose to capture the immediacy of Bartolo’s work and life, with occasional phrases in Lampedusa dialect (like a well-seasoned brodetto, or fish stew).

The same sea that yielded this staple and a livelihood for Bartolo’s father could have driven Bartolo from Lampedusa forever when he left for school. Instead, he longed for the island’s rugged shores, just as the refugees he would treat would long for theirs.

Bartolo, a married father of three, often likens the changeability of Lampedusa life with the surrounding sea, whose relentless waves regurgitate the living and dead to reveal the stark truths that stubbornly wash up on the shores.

Given its intimate emphasis, Tears includes little of the greater context of the refugee crisis. According to the UNHCR, Europe saw 172,301 sea arrivals in 2017; of those, 4,740 were in Italy. Near the end of the book, Bartolo cites the figure of 7,000, which only covers the unaccompanied young.

The doctor rightly notes that, on its own, the figure is hard to visualize. It is the book’s painstaking and fierce portrayal of individual cases, like the 368 bodies found off Lampedusa’s coast on one day, that drives home the incalculable hardships.

Throughout, Bartolo intersperses the miseries of human trafficking — rape, torture, disease, separation — and touches on attendant horrors, such as organ trafficking. Because he seeks to heal the body and inspire hope, he is a continual advocate for the refugees’ plight beyond the Lampedusa clinic.

Yet, when movie director Gianfranco Rosi visits the island seeking inspiration for a film, he tells Bartolo he hasn’t found it. Bartolo immediately offers his flash drive with 25 years of patient stories. When no word comes from Rosi, Bartolo thinks he’s passed on the idea. Then, Rosi returns to say he will make the movie, “Fire at Sea,” which eventually wins critical acclaim and an Academy Award nomination for Best Documentary Feature.

Bartolo says that what makes the film memorable is that Rosi shot the scenes “unmediated and with no filters.” This is how Bartolo wants the world to see and remember “the memory of who we used to be.”

At a time when the global refugee crisis is frequently reduced to intellectual debate, Tears of Salt is worth reading, perhaps less as a literary work and more for its personal narrative, which reveals the human side of suffering through the life of one man.

The overall effect of this mutable mural is the restoration of dignity to the mothers, fathers, sons, and daughters “who are only asking for a place where they may live and grow.” Through Tears of Salt, the reader gets the opportunity to do the same.

Adele Annesi is an award-winning Italian-American writer whose works have appeared in various periodicals and literary journals. Her essay on Italian citizenship is part of the Clarion Award-winning Essays about Life Transitions by Women Writers, and her flash fiction on Italy has been adapted for the stage.