Romance and backstage intrigue share the spotlight in this theatrical tale. 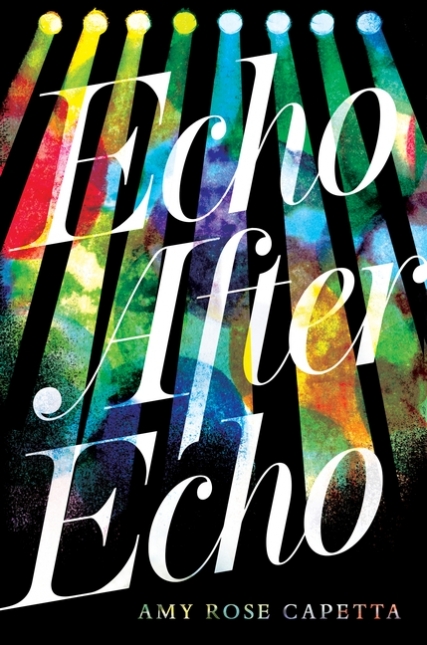 For every cast or crew member in a theater production, for every ingenue or hoofer who wants to delve into the glittery backstage intimacies of a Broadway production, Amy Rose Capetta has a novel for you. Echo After Echo captures an actress’ big break and first big love, plus a bit of improbable (but entertaining) murder mystery at a Broadway show.

The story opens on the audition. Small-town student Zara Evans, 18, attends an audition at the famed (and fictional) Aurelia Theater in New York City for the new production of "Echo and Aristan," a cross between Romeo and Juliet and a Greek tragedy.

“Being an actor is all about finding keys from the real world that open imaginary locks,” Zara muses at the onset, offering us a clue to the story that will unfold.

In short order: Zara astounds at the audition and secures the role of a lifetime, quits high school, and moves to Manhattan to pursue her dream. Soon after joining the company and going into rehearsals that stretch into the night, Zara discovers the dead body of the lighting designer. This untimely death puts Eliza “Eli” Vasquez, a 19-year-old Puerto Rican assistant lighting director, into the forefront of the production. Soon, Zara and Eli fall slowly and sweetly in love, even as more nefarious warnings swirl about the theater.

But the show must go on.

Throughout the novel, there are gossipy, delicious insider details about theater life in New York. Capetta, the novelist, has a theater background, including studying at the renowned Stella Adler Studio.

From the opening description of the audition: “The greenroom is delightfully shabby. Ancient couches have been pushed aside to make room for the actresses. A cornered snack machine hums resentfully. No one’s buying. These girls in their stylish dresses, with their stylish bodies, do not look like they have ever snacked.” Capetta places the reader on stage, in the footlights, ready for the curtain to rise.

Divided into three acts, the novel unfolds through the eyes of those who work at the theater. The cast of characters, however, in some cases reads like a stock list, including the manipulative, harassing theater director, Leopold, and his poisonous, pill-pushing assistant, aging actress Meg. The depictions of danger and malfeasance afoot seem like asides — action in the wings rather than centerstage — and, at points, threaten to make the story more farce than drama.

Industry-specific terms radiate throughout the novel and function on many levels, as in this scene with Zara and her male lead, directed by Leopold: “Kiss/kill is the distance we use to show intensity. Leopold prods Zara in the back again, forcing her closer to Adrian. So close, the character seems to have only two courses of action. They might kiss, or they might kill each other.”

The lack of tension onstage between Adrian and Zara is contrasted with the aching tension between Zara and Eli offstage.

Anyone who has ever worked in the theater will recognize Zara’s insights into the all-consuming nature of production: “Plays are usually filled with people who come close for weeks and months… they confide, reveal, peel back fears and secrets to see what’s underneath. They dream together. They wrestle and fight and laugh too loud and kiss for no reason.”

One can believe that the true drama of this novel, the love story between Zara and Eli, will continue far after the curtain falls. As the novel notes: “This is their story.”

Echo After Echo is a young-adult novel deserving of the reader’s applause, even a standing ovation.

Caroline Bock is author of the critically acclaimed young-adult novels LIE and Before My Eyes. She is a 2017 recipient of a Montgomery County Arts and Humanities Council F18 Artist and Scholar Award for her writing. She is at work on a new novel.

An immersive page-turner set in the Civil War-era South.

The nature of gossip, with its thin divide between showing concern and inflicting harm, propels three friends towards loss and tragedy in the author’s latest novel.