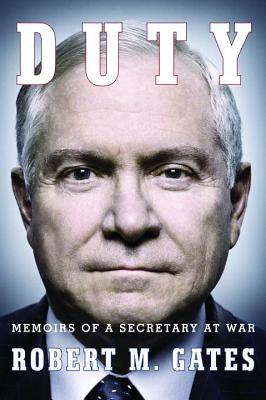 Robert Gates has published yet another memoir — and it’s a bewitching read.

It captivates in part because of the author’s credentials. Gates served as director of the Central Intelligence Agency, deputy national security advisor and secretary of defense, answering to a total of eight presidents. He’s also the only defense secretary to have worked for consecutive commanders-in-chief from opposing parties (George W. Bush’s last two years, Barack Obama’s first two) — all while the country was involved in two major wars.

Duty thus provides the ultimate insider’s perspective. A smooth read despite its 600 pages, the book offers a tantalizing and informative first-person account of recent national security policymaking: the wars in Iraq and Afghanistan, Guantanamo, Wikileaks, relations with “difficult allies and difficult foes” and the end of the military’s workaround ban on gay service members, to name just a few.

Gates provocatively peppers his analysis with long-suppressed frustrations. He admits that he so “detested” serving as defense secretary that he kept a countdown clock that ticked off the days, hours and minutes to retirement. The Obama administration, Gates vents, was by far the “most centralized and controlling” since the Nixon White House. Obama lacked “passion” for fighting the wars in the Middle East. And Vice President Joe Biden — who was “wrong on nearly every major foreign policy and national security issue over the past four decades” — sought to “poison the well” against the military leadership.

Neither is the defense sector spared a lashing. He derides both the armed services’ “preoccupation with planning, equipping, and training for future [major] wars” and the Pentagon’s general lack of “urgency, concern, or passion about the grim situation” facing U.S. troops in Iraq and Afghanistan.

Yet it is Congress that most causes Gates’ bile to rise. He finds the legislature to be “uncivil, incompetent in fulfilling basic constitutional responsibilities, micro-managerial, parochial, hypocritical, egotistical, thin-skinned, often putting self (and reelection) before country.” Members of the House Foreign Affairs Committee are particularly “rude, nasty, and stupid.”

Duty is most gripping then because, pages of cool analysis aside, it lays bare the emotions that roil beneath the surface of policymaking in Washington. On the subject of testifying to Congress, Gates’ blood nearly boils over: “All too frequently, sitting at that witness table, the exit lines were on the tip of my tongue: I may be the secretary of defense, but I am also an American citizen, and there is no son of a bitch in the world who can talk to me like that. I quit. Find somebody else.”

If such candor from a former high-ranking official is bewitching, it also leaves the reader feeling bothered.

That’s because Robert Gates has a reputation for being bipartisan, levelheaded, quiet. “Never miss a good chance to shut up” is his self-professed favorite maxim. Why then publish a book with such angry outbursts? Why risk undermining a sitting president’s ability to conduct foreign policy, including ending the war in Afghanistan? Why discourage future presidents from reaching across the aisle for top advisers?

Bewildering in part because, initial reactions to the book notwithstanding, Gates actually is not hell-bent on character assassination. Yes, he has critical things to say of Obama (Gates also points out the Bush administration’s “bungling” in the first few years of the Iraq war and occupation). But criticism is amply offset by kudos: Obama is “quite pragmatic on national security,” was “the most deliberative president I worked for” and was “right” on each of the major decisions on Afghanistan despite contrary advice from his political advisors.

Duty also bewilders because it offers up no constructive insights. Does anyone believe that Congress isn’t “ugly” when viewed up close? That White House staffers aren’t often partisan and inexperienced? That the defense department is not an unwieldy, inefficient and stifling bureaucracy? Gates, moreover, offers no blueprint for changing the status quo.

Why then did he write this book?

In his desk at the Pentagon, Gates kept a hand-copied passage from Doris Kearns Goodwin’s book Team of Rivals. It described how Lincoln’s secretary of war, Edwin Stanton, wailed “God help me to do my duty!” after making a decision that would result in a soldier’s death.

This passage clearly resonates with a man whose entire tenure as defense secretary was weighed down by the two wars in the Middle East. Duty reveals how on too many evenings Gates would go home after work, pour himself a stiff drink and weep as he signed letters of condolence to families of yet more dead American servicemen.

Yet “There are no evil people in this book. There are no villains,” he has emphasized. Everyone in the Obama administration treated him “better than he’d ever been treated before.”

“Why,” he thus asks, “did I feel I was constantly at war with everybody?” His answer: because “getting anything of consequence done was so damnably difficult.” Washington itself, in his view, is broken.

Broken because the system required all of Gate’s wiles — and two years of effort — to ensure the troops had the necessary vehicles (MRAPs) to protect themselves against the improvised explosive devices (IEDs) that were proving so deadly in the Middle East. “No one at a senior level wanted to spend the money to buy them.“Broken because of the “parochial self-interest of all but a very few members of Congress. Any defense facility or contract in their district or state, no matter how superfluous or wasteful, was sacrosanct.” Gates recalls Senate Majority Leader Harry Reid once even urged him to have the defense department invest in research on irritable bowel syndrome. “With two ongoing wars and all our budget and other issues, I didn’t know whether to laugh or cry.”

The core of Duty then might be about weakness. But not just the weakness of the political process. One overlooked passage of the book is revealing: “Those at the highest levels of government, tough and experienced people accustomed to the hard knocks of political life at the top in Washington, are still human beings. All of us, in varying degrees, have vulnerabilities, insecurities, and sensitivities.”

Perhaps Duty is really a cri de coeur — a venting at the author’s own inability to carry out what he sees as his personal duty: to get the U.S. policymaking machinery to care as much as he does about the lives of the men and women who carry out defense policy on the ground.

Dr. Andrew Marble is writing a biography of former chairman of the Joint Chiefs of Staff Gen. John Shalikashvili.