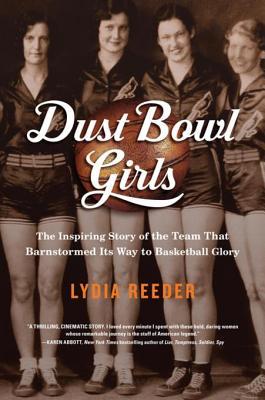 By 1930, the Great Depression had begun to hit Oklahoma and neighboring Texas hard, with collapsing oil, livestock, and crop prices; unemployment soaring; and drought taking hold. Conditions would only worsen over the course of the decade, resulting in population loss, the nearly halving of the monetary worth of farm products, and calls to shutter major programs at the leading state universities.

Eventually, “Okies” joined with other refugee farm families in migrating to the West, seeking better opportunities, as celebrated in Woody Guthrie’s songs, John Steinbeck’s The Grapes of Wrath, John Ford’s cinematic presentation of that epic novel, and the brilliant work of photojournalists Dorothea Lange, Russell Lee, and Arthur Rothstein.

In certain regards, author Lydia Reeder, whose great-uncle Sam Babb is one of the central figures in Dust Bowl Girls, has delivered an account worthy of joining that august cultural pantheon.

Dust Bowl Girls relates the story of Coach Babb and the remarkable group of young women who made up a national-championship basketball squad at Oklahoma Presbyterian College during the early stages of the Depression. From 1931 to 1934, the Cardinals would compile an 89-game consecutive winning streak, capture two American Athletic Union national titles, win the North American championship, and cap that off with the 1933 Women’s World Championship.

Reeder explores how Babb put that initial national team together in the face of economic distress and competition that include the Cardinals doing battle with the defending champion Employers Casualty Company’s Golden Cyclones, led by the soon-to-be legendary Babe Didrikson.

Along the way, Reeder explains differences between the women’s and men’s games of the era, including the then-in-vogue six-on-six version on the hardwood, directives pertaining to dribbling and placement on the court, and shortened — 10-minute — periods for the Cyclones, the Cardinals, and their competition.

The public of the time held a longstanding antipathy toward female participation in competitive sports, but basketball was a major attraction for rural inhabitants, who provided the bulk of Babb’s team. Reeder captures details large and small, like the joy the Cardinals experienced upon receiving matching cardigan sweaters, wool skirts, and red berets while they readied for the national tournament.

What Reeder does particularly well is discuss the hardscrabble backgrounds of Coach Babb and so many of the young women whom he convinces, in spite of economic circumstances and familial pressures, to attend Oklahoma Presbyterian College. Several of the protagonists come alive in Dust Bowl Girls, not least of which is Babb, whose prosthetic leg was the result of an attempt to protect his younger brothers from a beating at the hands of their father, a judgmental circuit preacher.

Babb individually recruits each of his players. He seems able to ascertain quickly if a player possesses “the strength of character” to join his Cardinals. A stern taskmaster, clearly not beloved by all, he demands a strict regimen of his young ladies (including banning sweets and snacks) and requires each player make 90 of her daily 100 free throws. In return, he manages to instill near absolute confidence in his players.

Reeder’s biographical treatment of the players proves equally deft, as she delves into their varying levels of confidence, phobias, and expectations. The team’s star, the All-American shooting guard Doll Harris, is diminutive, freckled, and determined to come across as attractive both on the court and off. Doll can be cocky, but she displays a softer side at times, particularly as she develops a crush on her coach.

By contrast, center Lucille Thurman, who was only 16 when she entered college, has recurrent ankle difficulties and suffers from anxiety that she fears will overwhelm her during the Cardinals’ most important contests. Whether knowingly or not, however, she begins believing in herself, providing guidance to young Indian children, and defending the coach against criticisms by teammates.

Dust Bowl Girls dissects key games, turning low-scoring affairs into riveting experiences. Notably, Reeder skillfully explores a pair of early-season contests against the defending national champion Cyclones and their star, Babe Didrikson. Later, she tracks the competition leading up to the seemingly inevitable rematch in the championship game, which culminates in a seesawing final 10 minutes.

The book concludes with a brief epilogue that notes the Oklahoma Sports Hall of Fame inducted the Cardinals as “its First Team of Legend.” It discusses what happens to the leading Cardinals, a number of whom continued playing for some time; several went into teaching, and more than a few became coaches.

In an apt closing sentence, after explaining how basketball empowered the young women, Reeder writes, “And these farm girls, who at one time never thought of lives beyond the cotton fields, got to be heroes.”

Robert C. Cottrell, a professor at California State University Chico, is the author of numerous books and articles, including The Best Pitcher in Baseball: The Life of Rube Foster, Negro League Giant; Blackball, the Black Sox, and the Babe: Baseball’s Crucial 1920 Season; and Two Pioneers: How Hank Greenberg and Jackie Robinson Transformed Baseball — and America.

Around the World in 80 Words: A Journey Through the English Language