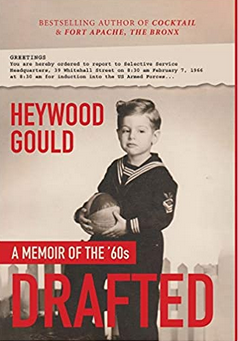 Heywood Gould is a smart ass, as he is the first to admit. Also, smart. And irreverent. And one helluva writer. The author of nine novels and nine screenplays, including “Fort Apache, the Bronx,” and “Cocktail,” he is a streetwise graduate of the New York City school of memory, of a place that no longer exists except in film noir or, in this case, book noir.

Drafted: A Memoir of the ‘60s is a fast-paced page turner that is both nostalgic and historic. It reads like a screenplay, with crackling dialogue and cinematic details that were either conjured up or recalled. There are no footnotes, citations, index, or bibliography. It’s just his word against history’s. Is it a memoir, a novel, or a screenplay? Maybe a little of each. A scrambled egg but not, strictly speaking, a Sixties omelet.

The nostalgic chapters, italicized and written in the third person, evoke the working-class New York of the 1940s and 1950s, his era and mine. He switches out of italics and writes in the dramatic present tense to bring him — and us — from the frivolous Fifties into the tumultuous Sixties.

The military draft is mostly background noise, but it looms over everything. Back then, there were no “gap” years, lest you lose your cherished 2-S student deferment. Gould hangs onto his, barely, though he drops out of college after a year of classes and a Paris summer sexcapade. Not exactly a Hemingwayesque moveable feast, but still a colorful chapter.

It’s important to note here that Gould (his radical parents named him after the revered 1930s leftwing columnist and newspaper guild organizer Heywood Broun) is not a baby boomer but a war baby. He was a Jewish kid from lower-middle-class Brooklyn; not today’s cool, trendy Brooklyn of millennials, but the borough that was home to a mix of ethnic whites, a place they could hardly wait to leave for the suburban lawns on Long Island or New Jersey. A draft card back then was not for burning but for burnishing as proof of maturity in New York State, where the legal drinking age was 18.

Gould, in fact, was not a draft resister and did not claim conscientious-objector status or run off to Canada. Instead, he was a draft dodger, passing his pre-induction physical but claiming a full résumé of allegedly “subversive” associations on his induction day, Feb. 7, 1966, which apparently kept him out of the U.S. Army and Vietnam.

The author lays no claim to the counterculture. His is mostly a passive, not pacifist, perspective. He wants to make love not war, but not for ideological reasons. He also wants to report on the unfolding events he observes as a young journalist for the then editorially liberal New York Post, from horrible housing conditions to protests over school busing to a failed attempt to shut down highways on opening day of the 1964 World’s Fair. It’s his dream job, and his descriptions of a working newsroom and the blue-collar stiffs who inhabited it accord well with my own memories of being a young reporter in Philadelphia back then.

It is in his effort to write colorful prose sympathetic to his underdog characters that Gould’s inner social conscience emerges, only to be quashed by hardnosed editors averse to adjectives, adverbs, and any cliché the cub reporter tries to get by them. Looking back, it seems to him (and, to some extent, me) like the golden age of streetwise, word-wise journalism, covering the news mostly — but not entirely — without fear or favor.

Gould keeps his distance from the emerging protests and declares, unashamedly, at one point, “Everybody’s got an act but me.” His lack of artifice was undoubtedly enriched by his side gigs as a bartender, mortician’s assistant, and cab driver as he pursued his primary calling: writing. His call to arms, it turns out, was neither military nor militant. He was simply a man of his times and of none other.

This, then, was Gould’s generation; it is also mine (and Joe Biden’s). We are not the aging boomers cursed by younger generations but aged war babies, birthed before the boom, largely forgotten but not yet gone. Thanks to Gould, we might also be remembered.

Eugene L. Meyer, a member of the board of the Independent, is a journalist and author, most recently, of Five for Freedom: The African American Soldiers in John Brown’s Army. Working on a memoir of his decades in the news business, Meyer has been featured in the Biographers International Organization’s podcast series.

On the Plain of Snakes