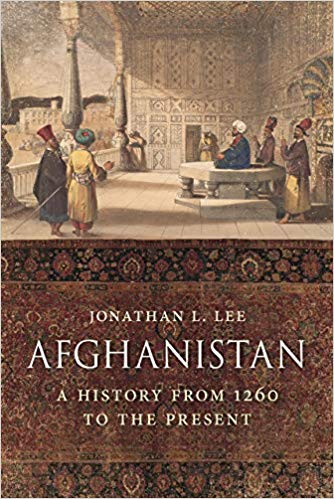 Jonathan L. Lee’s massive Afghanistan: A History from 1260 to the Present is an exhausting march through centuries of conflict and bloodshed. In many ways, the country is as bloody and unstable today as it was during the 13th century, when shifting alliances, betrayal, greed, massacres, and more massacres swept the area from Tehran in the west to Delhi in the east. Page after page of the book offers evidence that no one, not even well-intentioned Americans, can change the basic narrative that defines Afghanistan.

In his introduction, Lee states his case: “Ethnically, Afghanistan has never been cohesive and the size and percentage of the country’s ethnolinguistic groups has long been a source of contention and political manipulation.” The ethnic mix in the region is both tribal and religious, with Muslims on one end, Hindus and Sikhs on the other, and every manner of hatred, self- interest, fratricide, and chicanery in between.

Lee is a leading authority on the history of Afghanistan and has lived there for many years. He is a fellow of the Royal Asiatic Society and the British Institute of Persian Studies. He has spent a lifetime studying this troubled region, and his account of Afghanistan’s history is almost dizzying in its power shifts and conflicts. The word “massacre” comes up frequently as he recounts the rise and fall of the men who controlled, if for a short time, the territory that would one day become modern (if that’s the correct term) Afghanistan.

There are the Persians, Russians, and any number of neighbors who, at one time or another, laid claim to it. All of them took something, but very few left anything other than resentment behind. Using trade as a rationale, the British invaded Afghanistan early in the 19th century — by way of India, which they occupied — and enjoyed what appeared to be victory. That was followed by a period of self-congratulation and complacency before the realities of the region brought them to massacre and humiliation.

Lee opens chapter six, “The Death of the Great Experiment,” with a poem by A.E. Houseman:

Far and near and low and louder
On the roads of earth go by,
Dear to friends and food for powder,
Soldiers marching all to die.

On their way out of Afghanistan, 4,500 British and Indian troops set out for Jalalabad with over 11,000 camp followers in tow. A week later, only 20 officers and 45 men remained. The rest were picked off, either killed outright or captured to face horrible deaths.

Later in the century, the British tried again, and failed again, to establish a stronghold in Afghanistan. Hajji Khan Kakar, who had no love for the British, is quoted as saying, “What the British gained from this and from their first Afghan war was the everlasting bad will of Afghans.” Ironically, following 9/11, the British would be back, this time with the Americans.

There have been brief periods of modernization, notably early in the 20th century. Then, as now, hardline Muslim clerics decried the changes, and violence followed. Most of the nods to the modern world were in Afghanistan’s few urban centers, not in tribal areas where life remained pretty much as it was centuries earlier, the exceptions being better weapons with which to kill enemies.

Lee’s book takes us through the Soviet invasion in the 1980s and the reasons for it. He also describes the bitter Soviet experience and the decision to leave after thousands of their soldiers were killed, some brutally.

He describes the rise of the Taliban, the heavy hand of neighbors Iran, Pakistan, and Saudi Arabia, and the by-now-familiar tale of Osama bin Laden, al Qaeda, and the terrorist attacks in New York and Washington, DC, that sent America into its longest — and still running — war.

In an eerie passage, Lee offers a chilling forecast of what’s to come as he writes about the Green Berets who first went into Afghanistan following Sept. 11th: “American Special Forces…became entangled in a world of shifting loyalties as powerful individuals manipulated the intervention to their advantage.”

The U.S. is still entangled in that world; not much has changed since the 13th century. But Lee, for one, hopes it might. He closes his epic story with these words: “One can only wish Afghans well, for they deserve better than to be condemned to perpetual insecurity and uncertainty.”

Larry Matthews is the author of Take A Rifle From A Dead Man.