Don’t Shed Your Tears for Anyone Who Lives on These Streets: A Novel

This ambitious, challenging work breaks with form and reflects on the psychology of fascism. 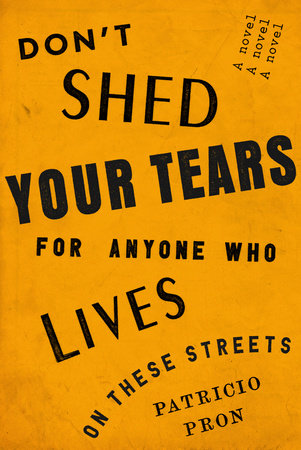 Don’t Shed Your Tears for Anyone Who Lives on These Streets, translated from the 2016 Spanish No derrames tus lágrimas por nadie que viva en estas calles, centers on the fictional recollections of many men (and one or two women) of a fascist literary conference. The event is held in Pinerolo, Italy, in April 1945 as the Allies are within days of the conquest of Italy and the defeat of Germany that ended World War II.

The character who appears most often is the fascist writer Luca Borrello, whose body is discovered coincident with the end of the conference. He has fallen to his death from a cliff-like protuberance. The reader never learns whether his death was an accident, suicide, or murder. Like much of the novel, a good deal of the information offered about Borrello, the reader is told, is open to question.

The long, rambling narrative leading up to the conference and what followed is divided into chapters that alternate between statements made by a dozen or so characters and third-person-POV accounts centering on a single character. The story stretches back to the 1930s and ends in 2014.

Borrello’s struggle with fascism is, to a degree, the theme of the entire novel. Other characters offer a parallel. They contemplate their own history and survival, along with Italy’s shift toward democracy and the destruction of the Italian Socialist Republic — which, it turns out, only lasted 600 days.

All the characters in the story are fictional, but the names of real people appear regularly, giving the book a feel of fact. Most prominent among these is Ezra Pound, an American expatriate and  fascist sympathizer who died in Venice in 1972 at age 87. He is invited to the Pinerolo conference but fails to respond.

Several chapters are taken up with the story of two men who, we find out toward the end, are father and son. The first is Peter (or Pietro) Linden, an anti-fascist partisan who shadows an old professor who is then murdered. In October 1944, Linden is wounded by the fascists but escapes. He finds his way to Borrello’s house in the open country. Borrello knows that he and Linden are enemies but nevertheless nurses Linden back to health.

The second man is “T.” His real name is Tomasso. We meet him in 2014 living in Milan. He is, we learn, Linden’s son. T. ruminates that his grandfather was a fascist, his father an anti-fascist. T. is neither.

Argentinean author Patricio Pron’s writing style is unlike any I’ve come across. In the book’s narrative chapters, a single paragraph often runs for pages. The sentences are very long and often imply that what the speaker is saying may not be true. The following is typical:

“Another possibility, thinks Linden, is that the writers he interviewed, whose testimony readily creates a narrative (certain facts converged with others, so all it took was composing an ordered story, even if that story couldn’t be further from the essential truth, which was betrayed by forced logic), had simply wanted to talk about themselves, and had accepted his offer to do so despite not being the main focus of the conversation. Although, thinks Linden, it’s possible that they were the main subject of the conversation, in some sense, and that all the interviews were the result of Linden’s desire to talk about Borrello’s death coming up against their determination not to, or to do so only if in exchange they were able to talk about themselves, leading to a mutual satisfaction that followed the initial disappointment of, after years of writing, being interviewed not about themselves but about someone else, regardless of what they thought about that someone else.”

A knowledge of Italian will help the reader. Neither Pron nor his translator offers definitions of Italian literary terms, book and poem titles, and locations. They aren’t crucial to an understanding of the story, but they help.

Early on, we are told that “they thought Borrello’s body of work had grown diffuse, transforming and taking on increasingly singular, strange forms (as if L’anguria lirica [the lyrical watermelon] wasn’t singular and strange enough).”

In a very real sense, the book is not a novel but a philosophical discussion of the relationships among art, politics, action, and violence in the context of fascism, in which a possibility and its antithesis are stated side by side.

Don’t Shed Your Tears for Anyone Who Lives on These Streets is not a novel for casual reading. Getting through it is hard work. Whether it’s worth the effort will depend on the preferences of the reader.

Tom Glenn spent many years working undercover in Vietnam. A linguist in seven languages with a doctorate in public administration, he is a fulltime author. He has 17 short stories and five novels in print, with a new book of short stories due out in July 2020. His most recent novel, Secretocracy, was published in March 2020.

When I’m Gone, Look for Me in the East: A Novel

A quiet, magical tale of never-ending questions and universal truths.