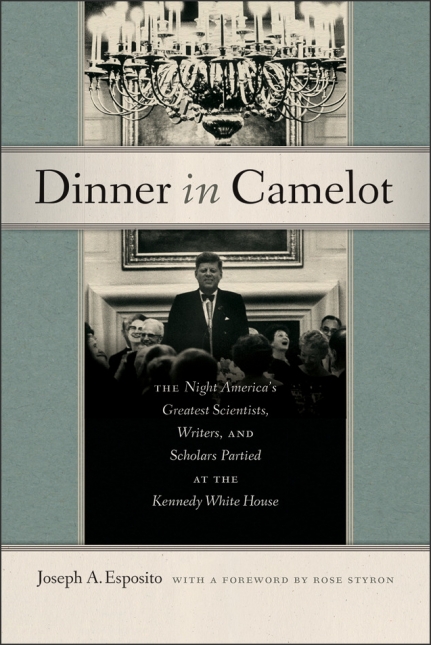 I imagine that most of us have, at one time or another, played the “what if” game. What if you could invite anyone in the world to dinner? Who would it be? Rock stars? Writers? The Kardashians?

Now suppose you are president of the United States and you’re married to a beautiful, cultured woman who has just redecorated the White House in an elegant, much-praised style. You admire and are friendly with the world’s smartest people.

If you’re of a certain age, you probably know where I’m going with this.

The “dinner of the century” was held on April 29, 1962. It was hosted by President John F. Kennedy and First Lady Jacqueline. There’s been nothing like it since. It was not a small, intimate gathering. There were 175 guests, 49 of them Nobel Laureates, including one who had joined picketers outside the White House that afternoon to protest Kennedy’s nuclear-arms policies.

There were writers, including James Baldwin, Pearl S. Buck, John Dos Passos, Robert Frost — the leading American poet at the time — and Katherine Anne Porter, who’s Ship of Fools had made the New York Times bestseller list that very day.

Joseph Esposito’s Dinner in Camelot is a thin book thick with details about the dinner, the Kennedys, the guests, and the period that came to be known as “Camelot.” (Kennedy and Jackie were fond of a Broadway musical by that name that was popular in the early 60s.)

There’s a bit of gossip in the book. We learn that Robert Oppenheimer, “Father of the Atomic Bomb,” and Nobel Laureate Linus Pauling were once good friends at Cal Tech until Oppenheimer made a clumsy pass at Pauling’s wife. Nevertheless, they both attended the dinner.

J.D. Salinger was invited but declined, something that was not unusual for him. William Faulkner, dying in Charlottesville, thought the trip to Washington was too far. Others decided that no journey was too great for such an honor and came from great distances and even other continents.

But Dinner in Camelot is impressive in its description of a time when Americans admired their first family, who embodied grace and intelligence. Esposito tells us about the dinner guests and how they came to be at the fashionable tables, but he also gives us a peek into the politics of the early 1960s, when Vice President Lyndon Johnson and Attorney General Robert F. Kennedy circled each other like rival wolves seeking to rule the pack.

We get a glimpse of the racial tensions that were about to explode across the nation. Of the 175 guests, only three were black, including Baldwin, whose books offered a window onto the burdens of African Americans.

But for one night, in the supernova that was the Kennedy administration, it was magic. It was Camelot. The president, in welcoming his guests that evening, issued what is arguably the most-quoted line in the history of White House dinners.

Gazing out at this unrivaled assemblage of the best and brightest, he said, “I think this is the most extraordinary collection of talent, of human knowledge, that has ever been gathered together at the White House, with the possible exception of when Thomas Jefferson dined alone.”

Larry Matthews is a writer and former broadcast journalist. His latest book is Nine Millimeter Solution.

An exuberant if overstated ode to…well, you know.