The Jersey Brothers: A Missing Naval Officer in the Pacific and His Family’s Quest to Bring Him Home

Though rich in details, this WWII-era saga feels disjointed and overly long. 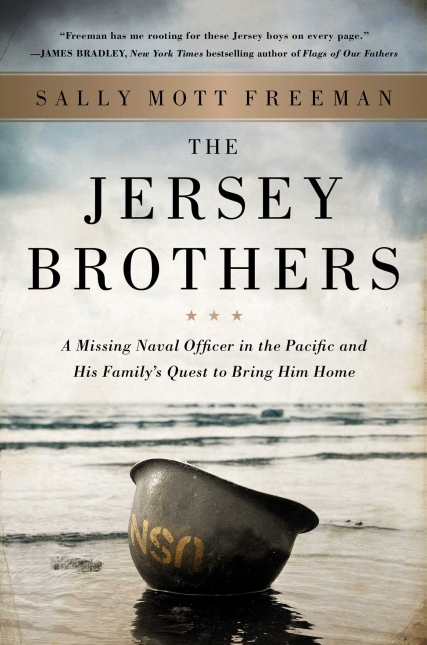 The Jersey Brothers is both a history book and a memoir. Author Sally Mott Freeman’s main theme is her attempt to learn what happened to her uncle Burton in the Pacific Theater during WWII. Using short, interspersed chapters of family, military history, and related topics, she also highlights the wartime careers of her uncles.

Burton Cross, along with his two older half-brothers, Bill (Freeman’s father) and Benny Mott, served as naval officers during the war. As a favor to their doting mother, the brothers attempted to protect Burton by getting him a non-combat assignment in the Philippines. They succeeded, but Burton was eventually captured by the Japanese after the surrender of the Philippines and never returned home.

Burton and his injured fellow naval officers and sailors were abandoned in Manila after General Douglas MacArthur surrendered and escaped from the Philippines. MacArthur rescued only his injured Army soldiers, intentionally leaving behind the remaining hospitalized Navy personnel to fend for themselves.

The POWs were brutalized by the Japanese. The author describes the prison life and cruel treatment they endured. Escapes were rare. If captured, both the escapees and the remaining POWs were severely punished. A few POWs did escape with the help of anti-Japanese guerilla forces. Some got back to headquarters in Australia and then to America.

These survivors gave detailed testimony describing the inhumane treatment they endured. Unfortunately, the material was so graphic that the military concealed the information until it was finally leaked and published in the New York Times. The POWs’ report was read aloud by General George Marshall at the Allies’ 1943 Quebec Conference to urge the British to increase their support for the war in the Pacific. Unfortunately, it came too late for Burton and his fellow prisoners.

As Freeman recounts, plans to rescue the POWs were made but were frustrated and delayed by rival egos and bureaucrats at MacArthur’s headquarters. After extensive discussion and preparation, the rescue plans were scuttled because the prisoners had been moved by the Japanese.

The author’s naval family ties are clear. She relates the internecine rivalries between the Navy and the Army commands in the Pacific. MacArthur is described as a no-holds-barred, tone-deaf, egotistical hindrance when it came to following orders from anyone or cooperating with the Navy. (It’s ironic, then, that the MacArthur Memorial Archives are located in the Navy town of Norfolk, VA.)

Much of the book is also a paean to the author’s father, Bill Mott. As a Naval Academy graduate during the Depression, he was not offered a commission upon graduation. Instead, he worked in the U.S. Patent Office and attended law school at night. After finally receiving a commission as a reserve officer, he went on active duty. Bill had a successful first assignment in intelligence working in the White House Map Room.

In the White House, Bill had direct dealings with Franklin Roosevelt, Winston Churchill, and most of the top military brass. Feeling guilty about this safe assignment, he applied for sea duty to get into the “real” war.

Despite the reluctance of Roosevelt to let him leave, Bill was assigned to the flagship USS Rocky Mount as a military lawyer and intelligence specialist. There, he was involved in the planning and invasion of Iwo Jima and Okinawa. He stayed in service after the war and ultimately retired as a rear admiral and chief of the Navy JAG.

The eldest Mott brother, Benny, was immersed in some of the most ferocious naval battles in the Pacific. He was a skilled gunnery officer responsible for the Sky Deck on the USS Enterprise during the Battle of Midway. At Midway, the battle group experienced relentless attacks by the Japanese air force and ships.

At the end of the three-day engagement, the U.S. had won an extraordinary victory, having sunk four Japanese carriers and a heavy cruiser. Bill and other gunnery personnel shot down over 300 enemy aircraft. However, the fight was also extremely costly to the American fleet and their aircraft. The USS Enterprise was severely damaged but was able to limp back to Pearl Harbor.

The author spent an extraordinary 10 years researching The Jersey Brothers. She traveled around the world reviewing records and interviewing POW survivors of the Japanese camps. Unfortunately, too many “irresistible” facts and stories from her extensive research muddy the flow of the book.

The tale is a kaleidoscope of her family’s involvement in the war, the battles in the Pacific, and the civilian and military politics of that time. All interesting material, but the overall result feels rather disjointed. Freeman’s attempt to create suspense by withholding details of Burton’s fate until the book’s end also seems contrived and ineffective.

This book has some wonderful military history and wartime material, but it could’ve used a slashing red pencil and a substantial reorganization.

The Opposite of Loneliness: Essays and Stories

Published posthumously, these stories and essays of a recent college graduate display fate’s betrayal of a promising literary future