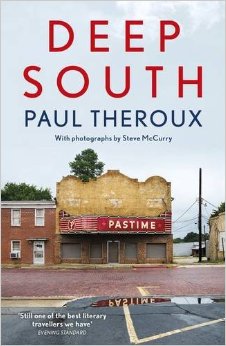 Nationalism is largely about mythmaking. And perhaps the two American myths held most dearly are that we are the most developed and least tribalistic country on earth.

One could disprove the former with even a passing familiarity with, say, our healthcare system or infrastructure compared to Western Europe or Scandinavia. Both notions, however, can be upended by taking a road trip that veers off of the Interstate Highway System, particularly in Dixie.

Deep South marks Theroux’s 10th travel book, adding to an oeuvre of more than 50 works that have collected praise and awards and established Theroux as the preeminent American travel writer of the last half-century. Now in his 70s, and having spent a lifetime venturing to all corners of the earth, encountering the most exotic places, cultures, and people, Theroux comes back home to study one of the oddest tribes of all — the American South.

He acknowledges the cultural and commercial contributions of the South, but in Deep South, he explores the rural areas where poverty reigns. “Many books have been written about the conspicuous excitements of the South,” Theroux writes, “but I made it my habit to drive past the buoyant cities and obvious pleasures in favor of smaller places and huddled towns, to meet the submerged twenty percent.”

And that he does, exploring the backroads and the downtrodden from the Appalachians to the Ozarks.

And one gets the feeling that as he takes his seasonal road trips from his Cape Cod home to below the Mason-Dixon Line, he and his “prissy Yankee sanctimony” are just as foreign in the American South as in any other dark, strange land. Theroux encounters a place where houses and truck bumpers bear the emblem of an unrecognized country that existed for four years, a century and a half ago; where superstition and nostalgia run deep in culture and politics, and are closely intertwined with a borderline pornographic obsession with owning firearms; where describing the game-day traditions on an SEC college football campus as a bit tribalistic is an understatement; and where the late segregationist Senator Strom Thurmond warned against admitting “the nigger race” into schools and churches but saw fit to father a daughter with his black servant.

Theroux also notes that the Deep South is a place where Southern hospitality is the real deal everywhere you go — but just a bit more hospitable if you are white. And it’s a place, he remarks, where the Civil War, the Civil Rights Movement, the outsourcing of manufacturing jobs, and the decline of industry all contribute to “the persistent memory of defeat.”

Theroux is not interested in the mythologized South. There’s been plenty of that, as he describes in “The Fantastications of Southern Fiction” and “The Paradoxes of Faulkner,” in which he writes, “What people take to be an epoch was a matter of mere decades of pretension and an exercise in irrational nostalgia.”

These are two of the three essay interludes in this book that divide his travel seasons. The third is a brief history and scorching critique of the n-word, which pulls in references from Harriet Beecher Stowe and Zora Neale Hurston to Jay-Z and Master P, and would have an aloof get-off-my-lawn tone were the reader’s eyeballs not busy getting pierced by “negro,” “nigra,” “niggas,” “niggaz,” and “nigguhs” quotes.

Of note, Deep South comes 25 years after V.S. Naipaul’s A Turn in the South, in which Theroux’s erstwhile mentor ambles through the land of cotton — listlessly attempting to connect the region’s past to its present, astutely dissecting parts of American tribalism, and wildly misunderstanding the fandom of the legendary Southerner Elvis Presley, all in a way that perhaps only a foreigner could.

While Naipaul was interested in institutions and drawing parallels to his similarly once colonized and slave-holding homeland of Trinidad, Theroux is interested in people. But both authors stumble upon a version of America that feels conquered and helpless. Theroux writes, “driving up a country road in the South was driving into the shadowy past,” but this sentence is one that could have come from either writer, really. And based on the similar themes of the two books, it should go without saying that not much changed or evolved during the intervening quarter century.

Is Theroux’s book a harsh take on Dixie? Sure. But not as harsh as the legacy of slavery, lynching, and burned churches. Not as harsh as third-world-style poverty and hopelessness. And not as harsh as history repeating itself. Of course, travel writers cannot escape their own cultural biases, nor can they escape their obligation to expose decrepitude and hypocrisy, even when it’s easily spotted.

Travel writers are also inherently lonely. But they can use this isolation and otherness to open up their eyes and ears to the voices of the past and present to see if they speak the same language. Then they have to make a choice. And they can choose whether or not to ignore the voices when they echo sadly through time and cry out, “Y’all come back now, y’hear?”

Deep South works because Theroux is a master of his craft, but also because he has just the right amount of road-weary wisdom to counter centuries of mythmaking. He does all this with clarity and charm. And — ever the untiring traveler — he keeps coming back to the South.

J. Grigsby Crawford grew up in the Great American West and resides in the Mt. Pleasant neighborhood of Washington, DC. At age 25, he published his first book, The Gringo, and since then has professionally ghostwritten. Most recently, he has begun working on Paradise: A Novel, a story of American declension set in the post-9/11 southwestern United States.