The hair and the sound were both bigger in the 1970s. 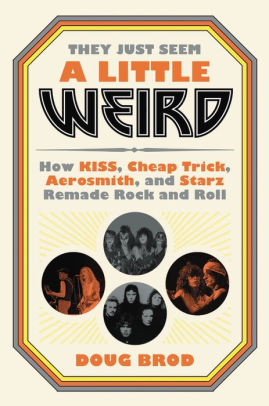 Owings Mills, Maryland, has probably never been mentioned in the same breath as rock ‘n’ roll landmarks Woodstock, Coachella, and Knebworth. But to hear author Doug Brod tell it in his fun new book, They Just Seem a Little Weird, our unassuming Free State suburb was ground zero for one of the great rock feuds of the 1970s.

In this heavy-metal version of the Hatfields and McCoys, it was where KISS roadies squared off against Aerosmith roadies in a battle that would frame “four bands that showcased a new kind of rock star: preening, clowning, sometimes spitting blood (and fire!),” Brod writes.

Whether it’s an account of messing with a competitor’s lighting before their first number or cutting an opening act’s time short if they threatened the headliner’s hold on the audience, Brod gives us an insider’s chronicle of a concert scene often ripe with petty sabotage.

The four bands in the spotlight arguably took rock music, and especially its live incarnation, to new levels by harnessing cutting-edge technologies and larger arenas in the 1970s. As one less successful musician puts it, “They’re a snapshot of America when it was the sexiest, coolest, most vital country in the world.”

The most interesting subtext in the book is the plight of Starz. By all accounts equally — if not more — talented as the other bands in the book’s subtitle, Starz didn’t achieve anywhere near their competitors’ level of success. It’s something of a mystery to Brod and many musicians, agents, and others he features in this well-paced, well-researched ode to 70s excess.

The author suggests the difference between success and failure is more about an intangible authenticity than talent. For all their artifice, KISS were genuine innovators in theatrics and showmanship, while Starz seemed to be following their example. “KISS were smart guys writing dumb songs for smart people,” Brod says in complete admiration.

Likewise, Cheap Trick had its own identity, with two handsome members and two nerds playing tongue-in-cheek, clever power pop. And early Aerosmith, fronted by Steven Tyler, maintained an artistic integrity with their Boston roots (even while leaning heavily on the Jagger/Rolling Stones dynamic).

Personally, I place Cheap Trick head and shoulders above the others in this book, the title of which comes from one of that band’s great hits, “Surrender,” featuring the lyric, “Surrender, but don’t give yourself away.”

Like Cheap Trick’s chief songwriter and guitarist, Rick Nielsen, says elsewhere in the book, I’m more impressed by KISS’ schtick and success than their songs, but Brod clearly respects them as a musically underrated band, and the book is richer for it.

For one thing, KISS was in on their own joke, which was one of their more appealing qualities. Even their arena-rock sexism wasn’t automatically offensive, says Runaways bassist Jackie Fox. “You weren’t listening to the lyrics, you were just listening to the rhythm,” Fox recalls. She contrasts them with the Rolling Stones, a band she did find sexist and offensive in a more alarming way.

“You heard ‘Under My Thumb’ — ‘the squirmin’ dog who’s just had her day’ — and that made you feel icky,” Fox says.

Like start-up companies struggling to adapt to changing times, each of the four bands had their ups and downs after their peak. Brod gives readers a bird’s-eye view of life in a rock bubble and reminds us that, while being a rock star at 16 might have seemed like the coolest of the cool, the dwindling audiences, drugs, and other destructive distractions faced by these bands prove that reality didn’t always equal the fantasy.

Michael Causey is host of Get Up! on WOWD 94.3 FM and takomaradio.org in Takoma Park, Maryland.

An intriguing reassessment of what really fueled WWII.