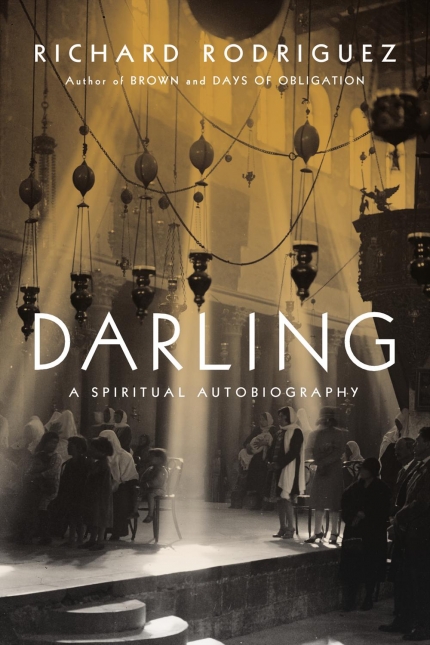 In his new book, Darling: A Spiritual Autobiography, Richard Rodriguez doesn’t give us an account of his life’s spiritual journey. He tells us in a “Note to the Reader” that the book is a response to the years of religious extremism after the events of September 11, 2001. He says he writes as a Roman Catholic but adds: “My faith in the desert God makes me kin to the Jew and the Muslim.”

Each of the book’s 10 chapters is a self-contained meditation on that religious kinship. The essays are a diverse assortment of reflections but are motivated by one basic question: What drives the human heart? Sound highfalutin? Not in Rodriguez’s hands. If you haven’t read his previous collections of essays, or have never heard his reassuring voice talking over tough questions on PBS, you’ll discover that he avoids turning his reflections into ideological pronouncements. He pleasantly supposes you might like to have a conversation.

Part of his conversational style is to assume you’re in no hurry. For instance, his title Darling prompts the immediate question: darling who? But a glance at his chapter headings tells you he won’t address that question until chapter five — after which you still won’t get a clear picture of the people he addresses with that endearment. Nonetheless, if you’ve read that far with pleasure and a growing curiosity, you’ll be used to moving forward despite uncertainty and delayed gratification. Rodriguez’s narrative style is similar to a magician’s technique: he calls attention to one thing, then to another, then to still another until, after much indirection, he suddenly produces something surprising.

As is true of magic shows, any string of buildups leading to surprises can tax the attention unless the buildups become more riveting and the payoffs more grand. Rodriguez doesn’t always pull that off. You can catch him straining for effect with abrupt transitions. For example, he ends a description of a warm room with the verdict: “exactly the right temperature,” then unexpectedly observes: “There is evasion involved in cuisine.” He later concludes, “To the observer, death is brown. Time is a bacterial process,” then pivots to tell us: “In the cleaned, ‘original’ version of the Sistine ceiling, Adam appears pale, beautiful, dead.” This seems like the trickster’s habit of startling us by first misdirecting our attention. But Rodriguez does have a feel for atmospheric details. He can pull vignettes from his memory with the speed of a conjurer tossing multicolored handkerchiefs in the air — and just when you think there’s no end to them, he pops up with a summary insight.

For instance, in the chapter “Jerusalem and the Desert” he describes his encounters with things both blessed and bleak by describing — among many other things — an energetic guide at the Dead Sea; Sarah’s laughter at the thought of getting pregnant; trips to the Mount of Olives, the River Jordan, a desert monastery and the caves of Qumran; and reflections on the familiar path of religions from dogmatic certainty to violence. Then, near the end of the chapter, he makes this observation: “[Jerusalem’s] Western Wall Plaza levels sorrow, ecstasy, cancer, belief. Here emptiness rises to proclaim its unlikeness to God, who allows for no comparison. Emptiness does not resemble. It is all that remains.” A concise (not to say cryptic) coda to all the legerdemain leading up to it.

That coda contains another of Rodriguez’s favorite stylistic methods: an arresting list. His stacks of words and phrases don’t paint a picture so much as suggest a mood or impression. He sums up the ephemeral nature of Las Vegas this way: “The Eiffel Tower, the Empire State Building, Caesar’s Palace — nothing in the world is rooted, nothing is permanent, nothing sacred, nothing authentic; architectural conceit is merely that.” He says about the word ‘darling,’ “The noun is overblown, dirigible, strikes the American ear as insincere”; and: “In Neo-classical and Romantic poetry, ‘darling’ is an adjective bestowed upon innocence: darling curls, darling buds. Darling boys.” Some of his lists build to a punch line; some sound merely like one thing after another.

Perhaps inadvertently, Rodriguez calls attention to the contrast between inventory and insight when, in a chapter on California, he notes, “Karl Marx wrote that Gold Rush California was ‘thickly populated by men of all races, from the Yankee to the Chinese, from the Negro to the Indian and Malay, from the Creole and Mestizo to the European.’ Oscar Wilde seconded Karl Marx: ‘It’s an odd thing, but everyone who disappears is said to be in San Francisco.’” Wilde does more than refer to a truth captured in Marx’s lumbering list. He jolts us into rethinking it.

Those who’ve seen Rodriguez on TV have heard in his voice the pleasure he takes in creating an impression with a series of titles, names or facts. Towards the end of the book, Rodriguez opens his description of how we come to believe by quoting from a Catholic pamphlet: “‘We believe something because we first believed someone and that someone is Jesus.’ But before we get to Jesus (or Abraham or Moses or the Prophet Muhammad or Buddha) there is probably someone else. Mama. Papi. Miss Nowik. Nibs. Rabbi Heschel. Brother James. Jim Downey. Robert McAfee Brown. Flannery O’Connor. Father Costa. Andy Warhol.” It’s an uplifting litany even if you can’t remember where each of those people fit into Richard Rodriguez’ spiritual journey. If you enjoy such deft flourishes, you’ll like taking the trip with Rodriguez in Darling.

Paul McCarren is a Jesuit priest writing Simple Guides to the Bible. He does pastoral ministry at St. Ignatius Church, Chapel Point, and at Loyola Retreat House, Faulkner — both of which are in southern Maryland.