Crying in H Mart: A Memoir

The author seeks to better understand her dying mother and strengthen family ties through food. 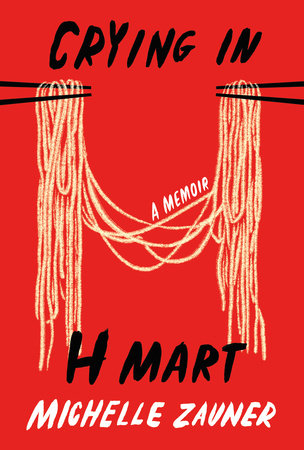 If you can’t travel but want to take a trip around the world, I suggest walking the aisles of H Mart. It’s an educational experience, a dizzying revelation of the varieties of human comestibles, and a delirious assault on all the senses at once.

To some of us who grew up severed from our Korean roots, each trip to H Mart is like a journey back to the motherland, a community where for one small moment, even if you don’t speak Korean or have a kimchi fridge, you are home.

“H Mart is where parachute kids flock to find the brand of instant noodles that reminds them of home. It’s where Korean families buy rice cakes to make tteokguk, the beef and rice cake soup that brings in the New Year. It’s the only place where you can find a giant vat of peeled garlic, because it’s the only place that truly understands how much garlic you’ll need for the kind of food your people eat. H Mart is freedom from the single-aisle ‘ethnic’ section in regular grocery stores.”

For the author, H Mart is also a place to grieve the recent loss of her Korean-born mother. The memoir is a record of her mother’s last cancer-stricken months, a reckoning of the author’s often contentious relationship with the strong-willed immigrant, a journey through the rock-bottom lows of her mother’s illness and the highs of her own burgeoning music career and blossoming romantic relationship, and an affecting, vivid chronicle of grief.

Zauner’s mother, Chongmi, meets the author’s white father while he’s in South Korea selling used cars to the U.S. military. “She was, supposedly, the first Korean woman he ever met.” After a brief courtship, they marry, and Zauner is born in Seoul. A year later, they move to his hometown of Eugene, Oregon, where she has a happy childhood. As she grows older, however, she and her mother are often in conflict.

Her mother is realistic in the way that immigrants have to be and has an Asian forthrightness that Americans find uncouth and embarrassing. “Hers was tougher than tough love. It was brutal, industrial strength.”

If Zauner hurts herself through her own carelessness, her mother berates her before tending to the wounds. She mercilessly criticizes Zauner’s looks, skincare regimen, clothes, and personality. She wants her daughter to have a toughness that her American skin lacks and frequently advises her to “‘save ten percent of yourself.’ What she meant was that, no matter how much you thought you loved someone, or thought they loved you, you never gave all of yourself. Save 10 percent, always, so there was something to fall back on.”

That is not an American sentiment.

Wrestling with accepting her Korean half, Zauner hates her looks as an adolescent. And yet, she yearns to be accepted as Korean. “I had spent my adolescence trying to blend in with my peers in suburban America, and had come of age feeling like my belonging was something to prove. Something that was always in the hands of other people to be given and never my own to take, to decide which side I was on, whom I was allowed to align with.”

When Chongmi is given her own cancer diagnosis, she agrees only to two chemotherapy treatments. Faced with the inevitable reality of her mother’s impending death, Zauner proposes to her boyfriend, and they marry at her home in Eugene. Shortly thereafter, Chongmi enters her death spiral:

“All this time I had feared a sudden death, but now I wondered how it was even possible that my mother’s heart was still beating. It’d been days since she’d eaten or taken water. It destroyed me to think that she could just be starving to death.”

Indeed, this seems the cruelest cut of all for a woman who so revered the positive power of eating, and who best expressed her love through food. Working through her grief, Zauner seizes on this shared connection of theirs and, with the help of YouTube cook Maangchi, teaches herself how to prepare Korean food. Her music career as the artist Japanese Breakfast takes off. She writes an essay on loss and grief that lands her a literary agent who, in turn, gets her an essay in the New Yorker and a book contract.

Zauner is keenly aware that her good fortune is born of the tragedy of her mother’s death, which inspired the songs that would become her first album and the essays that would become her first memoir. Her facility with language, her graceful ability to translate complicated topics into a coherent narrative thread, her illuminating reflections on loss, and her poignant insights into the mixed-race child’s yearning to belong mark this as a genuine literary debut rather than the usual dreary exercise in building a celebrity platform.

Like a visit to the eponymous supermarket, Crying in H Mart transports readers to a place where cultures meet, and food brings people together. Like an elaborate Korean meal, it leaves the reader sated while eagerly anticipating what will come next from its talented creator.

Alice Stephens is author of the novel Famous Adopted People, editor of Bloom, a book reviewer, and a columnist for the Independent. The closest H Mart is 4.7 miles from her home.