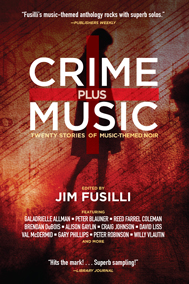 The consensus in publishing is often that, with few exceptions, short-story collections don’t sell. Readers prefer the immersion of a full novel rather than a nimble book of shorter, sharper work. This is a shame, particularly if that negligence leads to missing out on Crime Plus Music: Twenty Stories of Music-Themed Noir, a collection of short stories edited by novelist and music critic Jim Fusilli.

It’s rare to come a set of stories so equally strong, particularly when they’re tied to the same themes: crimes and music. As Fusilli wryly notes in the opening line of the introduction, “I don’t suppose it would be much of a surprise to discover that there’s a dark and deadly side to the world of popular music.”

And the stories in this anthology explore that dark and deadly side: from drunk or drug-hazed bands to desperate, deviant managers, to the music itself, and how aged musicians still reach for those fading notes.

Each writer’s story reads as a unique solo during some exciting, unforgettable concert. Many of the names in this collection will be familiar to fans of crime fiction: Reed Farrel Coleman, Alison Gaylin, Brendan DuBois, and Val McDermid. The thriller writer Zoe Sharp has perhaps the most inventive incorporation — exploring the sadistic notion of playing music, looped and at full blast, into a prisoner-of-war’s ears.

But throughout the collection, the prose is just as inventive, and often beautiful:

“But when she blinked her long lashes made him think of the way a drummer’s brushes softly touch the skins when the music gets slow and sad and sweet.” – Peter Blauner, “The Last Temptation of Frankie Blauner.”

“There’s nothing sadder than a Sunday night in a small town…” – Willy Vlautin, “A Bus Ticket to Phoenix.”

“The memory grows stronger in my mind as I kneel in front of Bret’s coffin — the heat of the alcohol in my throat, the feel of fishnet stockings and a too-tight skirt, the way everything blurred and my words slurred and I weaved on my feet. The dizziness of that night. The thrill.” – Alison Gaylin, “All Ages.”

One of the standout stories in this volume has the potential to be included in other anthologies, like the Best American Mystery Stories or the Best American Short Stories. Surprisingly, it's written by the writer least experienced in fiction, Galadrielle Allman, daughter of rock legend Duane Allman and author of the memoir Please Be With Me: A Song For My Father, Duane Allman. Allman's contribution, "Only Women Bleed," is raw and emotional, and tells the story of a young music fan discovering the perils of men and sexuality. It’s a brutal story that offers no easy reconciliation, only a harsh measure of understanding.

One disappointing note is the lack of diversity. Only six of the 20 writers are women, and only one — the terrific Gary Phillips — isn’t white. Perhaps this similarity may be what led to, as Fusilli notes in his opening, a focus on “in particular, rock and pop.” To that end, the anthology may have been better served to specify a particular genre or musician, as did the recent anthology Trouble in the Heartland: Crime Fiction Inspired by the Songs of Bruce Springsteen.

The omission of writers of color isn’t necessarily damning, at least it wasn’t to me. Truthfully, the quality of the writing in the collection is so high that, regardless, I enjoyed what I read. But it’s a bit surprising for an anthology in this age, particularly given the subject of music and its importance culturally. A wider range of authors may have produced a wider selection of music and led to a book that offers a more universal soundtrack.

E.A. Aymar’s latest novel is You’re As Good As Dead. He is involved in a collaboration with DJ Alkimist, a NY- and DC-based DJ, where his stories are set to her music. For more information about that project, visit www.eaalkimist.com.