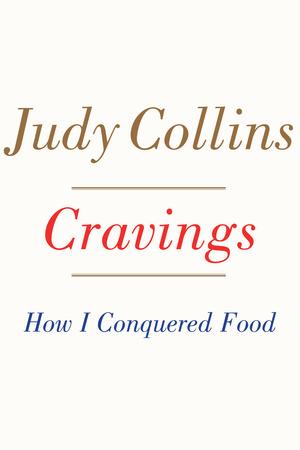 According to the Mother Goose rhyme, little girls are made of “sugar and spice and all things nice.” Unless those things nearly kill you. Judy Collins’ 11th book, Cravings: How I Conquered Food, is a powerful pastiche of memories, augmented with brief biographies of pioneers in weight control, in which the singer-songwriter reveals how an early enchantment with sugar exploded into a fierce, 40-year servitude to food and alcohol.

Born in Seattle to a revered disc-jockey father and homemaker mother, Collins endured family difficulties by diluting them with culinary comforts. Her beloved dad was “an alcoholic…with the genetic disposition to the illness, a Jekyll and Hyde who could turn from charming to terrifying when he was at his worst. He drank whiskey…and like me, he loved sugar…he kept chocolate-covered cherries in his sock drawer where he hid what he thought was his secret. All of us children knew where they were.”

Meanwhile, in her growing-up household, pies, cakes, and other delights inadvertently turned into an obsession in the making. The gifted Mrs. Collins fashioned fudge and meringues, apple and pumpkin pies, and delectable Tollhouse cookies: “From the age of three I knew nothing could make me happier than devouring sugar in any form, at any time…Sugar fueled my race through life. It was the beginning of my dance with the devil.”

Collins and her father were genetic mirrors of each other. When he relocated the family to Los Angeles for a lucrative DJ slot with CBS, she studied piano and was nudged by him to ramp up the number of their/her performances on his show, engage in school productions, and give piano recitals. Pressure climbed, but “sugar in all its many forms became a drug…it soothed my anxiety and sense of doom.”

Eventually, Mr. Collins lost his job, the family moved to Denver, and his alcoholism progressed. Judy Collins got polio and recovered; her father engaged a new piano teacher, the world-renowned Antonia Brico, and the young Collins absorbed the rise of her father’s standards — until she turned 11. That year, she botched a suicide attempt:

“I went to the medicine cabinet in my parents’ bathroom and looked eagerly about…there was nothing…but a few uninteresting-looking bottles…and an unopened bottle of aspirin. I tore open the aspirin bottle…and threw handfuls of the pills down my throat…There were a hundred and fifty tablets and so it took a while…suddenly I was getting sick to my stomach. I wanted to die but I certainly did not want to have to throw up!...I reached for the phone and called…my best friend, Marcia…her mother answered the phone…I told her what I had done, and she said, ‘Put your finger down your throat, get that stuff out of your stomach and I will send Sherman [her doctor-husband] over at once.’ I did as she told me.”

Mr. Collins wrote a guilty letter of apology to his daughter for thrusting his chronic expectations of perfection on her, but there was no follow-up therapy or family intervention. The incident was never mentioned by anyone.

Eventually, Collins accumulated a gaggle of friends; she dated, went to movies, and satisfied the stampedes for sugary satisfaction with Jujubes, Necco Wafers, Rice Krispies squares, and her mother’s omnipresent treats.

At 19, Collins married Peter Taylor and had a son. With her father’s help, she got an audition at the Boulder-based Michaels Pub. Collins got popular, expanded her musical repertoire, took up drinking, and moved on to Gate of Horn, a folksy Chicago venue known for pulling in a potpourri of performers from Theodore Bikel to Odetta and Lenny Bruce.

In the meantime, while Peter was studying for his master’s degree, Collins had an affair and started to take drugs. The marriage dissolved. Now, she was a mostly drunk working mother who lost custody of her only child.

Despite years of liquored-up living, bender-like eating binges, and perpetual purges to stay thin — “I have thrown up in the bathrooms of a thousand restaurants and taken laxatives for years on end” — Collins’ career continued to climb. She traveled the United States, Australia, Japan, the United Kingdom, and Europe; produced gold and platinum albums; and kept her difficulties a secret.

Collins counted on a deluge of doctors for respite from the weariness of weight and other maladies, but nothing really worked. Sporadic relief came from vodka, facials, hair treatments, touring, and, when at the very sharpest edge of desperation, detox.

In alternating chapters, Collins identifies “notable persons” with problematic poundage. William the Conqueror, for example, believed he could rejuvenate his physique and health with a liquid diet of beer and wine, but failed. Lord Byron, the 19th-century poet, was similarly confounded by his girth. Though he gorged constantly, he tried to truncate his fat with “obsessive exercise bulimia” and heaping amounts of magnesium to initiate a purge.

According to Collins, “Some believe that creative people have a hound with hungry jaws chasing them down the corridors of beauty…Byron was a king of eating-disorder literature. He was honest and brave, fighting a war…in his own body. It was a war that he, like many of us, could not win.”

In late 1982, Collins discovered GreySheeters Anonymous, a program that requires measured meals stripped of sugar, grains, flour, and wheat, as well as regular meetings. Since then, the singer has not binged — or come unhinged.

David Bruce Smith is the author of 11 books and founder of The Grateful American Foundation, which is celebrating its fourth year of restoring enthusiasm about American history for kids — and adults — through videos, podcasts, and interactive activities, and The Grateful American™ Book Prize for excellence in children’s historical fiction and nonfiction focused on the United States since the country’s founding.