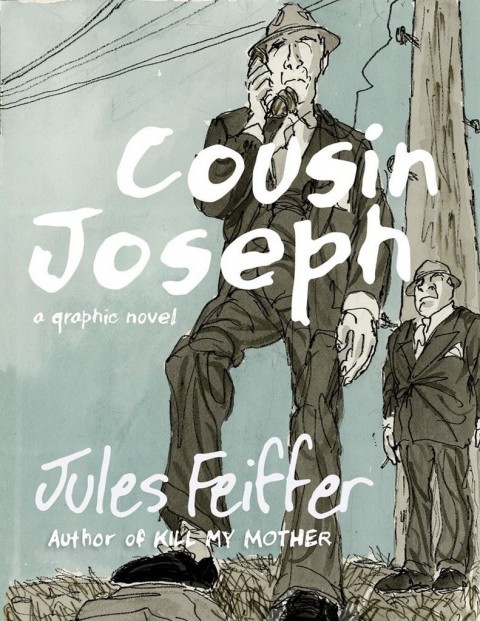 Cousin Joseph is our latest gift from Jules Feiffer, that versatile grey eminence who can stick a “been there, done that” pin in virtually every waypoint in the American cultural landscape. He’s a Pulitzer Prize-winning editorial cartoonist; a gallery artist; an author, playwright, and screenwriter; an illustrator of children’s books; an Oscar-winning documentary filmmaker; and, almost certainly not finally, a superb graphic novelist, as exemplified in Cousin Joseph.

In this prequel to 2014’s Kill My Mother, Feiffer, 87, circles back to the beginning in more than a strictly literal sense. A childhood admirer of comic-strip maestro Milton Caniff (“Terry and the Pirates”; “Steve Canyon”), he signed on at 17 as a “balloon” specialist, writing and inscribing dialogue for pioneering graphic novelist Will Eisner (“The Spirit”). Feiffer stayed on with Eisner for nine years, ultimately ghostwriting stories for the comic-book series. From there he was off to the Village Voice, where he was to win a Pulitzer as an editorial cartoonist.

Feiffer’s early comic-book days and his affection for American films of the 40s and 50s most tellingly influence both Cousin Joseph and Kill My Mother. The earlier of the two graphic novels, which takes place in 1943 — 12 years after Cousin Joseph fades to black — follows several characters whose stories begin in Cousin Joseph.

In other words, the action of the current book is set up in Kill My Mother, a tongue-in-cheek bouillabaisse of psychopathologies that culminates in a bloody climax suggesting Quentin Tarantino in his most Jacobean mood. What makes both books funny — and they are funny — is the stark emotional detachment of the narrative regularly punctured by Feiffer’s dead-on instinct for sliding in a gag line or unexpected revelation at just the right moment.

Feiffer overtly claims a kinship with American film noir in the first of the two novels. Even so, Cousin Joseph is more attuned to the noir sensibility, despite the irony that its story takes place in 1931, at least a dozen years before the first onscreen exemplars of the noir style began to emerge.

What’s more, the plotline of Cousin Joseph is rooted in our shared conception (circa 2016) of Hollywood’s creative culture in the early 1930s — specifically, its fascination with “outsider” themes as embodied in gangster films and crusading social melodramas that champion the struggles of the heroic little guy in potentially deadly conflict with prevailing cultural forces. Both are onscreen battles rarely won by their protagonists.

Cousin Joseph’s title character is a self-styled enforcer of dominant American values, a wealthy financier determined to influence nascent productions through seemingly benign “investments.” Of course, he turns out to be the very embodiment of the most corrupt values of the day.

Sam Hannigan, the moonlighting detective charged with delivering Cousin Joseph’s bribes, is the book’s true hero. He is a self-righteous copper whose submerged idealism is matched only by his propensity to resolve challenges with his fists. He operates in the murky setting of many onscreen exemplars of the noir style: a shadowy nightscape where a knack for violence is the good-as-gold currency of street-level dominance. Most noir heroes rely on their fists; it’s the bad apples who are quick to pull revolvers from their topcoats.

And so it is in Cousin Joseph. At the outset of the book, Sam feels good about his mission, but as soon as he uncovers the nativist and anti-Semitic motives behind Cousin Joseph’s agenda, he stands up for true American values. In the novel’s climax, Sam, like so many noir heroes, is betrayed by an ambitious woman in whom he’s placed all his trust, with the betrayal going down in a locale bleakly familiar in the noir ethos: a murky wharf at midnight.

We meet many quirky Hollywood standbys in Cousin Joseph, notably Billy Doyle, the Cagney-esque union leader who was also Sam’s best friend in high school. (Billy, to the surprise of nary a reader who’s hip to the genre, is later framed for a murder he didn’t commit.) There’s also the gruff factory owner, the bent police detective itching to crack down on the “Reds” who man the picket line, and the plain-spoken counter woman at Sam’s favorite all-night diner who is saving her tips to buy the joint. Sam’s wife, Elsie, and daughter, Annie, both of whom are to figure prominently in Kill My Mother (please don’t ask how), also have supporting roles here.

This book is funny both in its own right and as a half-serious homage to a historical film style Feiffer admires. But its allusive wit is not the book’s only hallmark. Cousin Joseph, like Art Speigelman’s Maus, represents a fresh departure from the graphic-novel mold. It adds new thematic resonance to the conventions of a primarily — and often brilliantly — visual art form.

Some readers may resist this characterization of the form. Perhaps they’re relegating it to the realm of TV sitcoms, where comic-book culture is trotted out as a foil for the banal pursuits of post-adolescent fanboys. But this is unfair. The graphic novel, in the hands of its most accomplished artists — the Stan Lees and Frank Millers — is a stunning medium.

Each frame demands a strict economy of expression through a spectrum of possible visual compositions: close up, long shot, mid-shot, top shot, helicopter shot, tracking shot, zoom, low angle, high angle, and so on. Pick up a good graphic novel and you may be amazed — dare I say blown away? — by the visual breadth and creativity of the artist in adapting cinematic style to the static page.

Feiffer gets this, and his respect for and mastery of the graphic-novel style — not to mention his nod of the links between American film and his chosen genre — adds substantially to the resonant appeal of Cousin Joseph.

[Editor's note: Click here to read the Independent's review of Kill My Mother.]