Confessions of a Rogue Nuclear Regulator

An insider’s take on one of America’s least understood, most potentially dangerous industries. 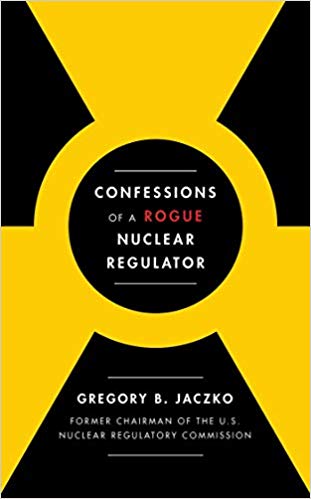 The average member of the public has little impression of the nuclear power industry, except, perhaps, for that conveyed by “The Simpsons.” Confessions of a Rogue Nuclear Regulator, a brief, plain-English book that acts as a tutorial on all things nuclear, seeks to rectify that.

Even if the book can come across as an exercise in image control — the author was dismissed as Nuclear Regulatory Commission (NRC) chairman in 2012 for reasons that are of some dispute — Gregory B. Jaczko has insider knowledge and important points to make.

Both Jaczko and his detractors can agree that an element of his dismissal was his increasing disaffection with the industry he regulated (hence the “rogue” part of his title). Already having doubts about the use of nuclear power, Jaczko was at the NRC’s helm in early 2011 when a magnitude 9 earthquake and resulting tsunami set off a horrific accident at Japan’s Fukushima Daiichi nuclear power plant.

Fukushima — a catastrophe from which Japan may never fully recover — was a pivotal experience in Jaczko’s conversion from “a scientist in awe of humans’ ability to see the genius of nature and harness it” to “a nuclear regulator humbled at what nature can do to turn our technological inventions against us.”

Fukushima was a shock because it happened “despite decades of advances in safety systems, reaction physics knowledge, and nuclear plant operator performance.”

In Jaczko’s view, more incidents like Fukushima, Three Mile Island, Chernobyl, and the other cases he cites are inevitable because impacts on nuclear power plants from the vagaries of nature and geology will always outstrip whatever worst-case scenarios modelers can devise.

For example, the United States may not be prone to tsunamis, but it is subject to tornados, flooding, and other extreme weather events that will only become more unpredictable as climate change advances.

These dangers are exacerbated in the United States by the primacy of profit over safety in the nuclear industry: With the “industry” actually consisting of many different private companies in many different sectors of the economy — and holding tremendous sway with anti-regulation members of Congress — incentives to put safety first are somewhat sparse.

In Jaczko’s telling, it was his efforts to tip the balance toward safety — and the resulting blowback from the commercial nuclear industry, Congress, and members of his own staff — that consumed much of his time at the NRC.

He is especially concerned with the fraught problem of radioactive waste, which takes millennia to decompose: “You would think that it would make sense to suspend nuclear power projects until we know what to do with the waste they create.” In fact, the crux of his anti-nuclear argument appears to be, “We must stop generating nuclear waste, and that means we must stop using nuclear power.”

Jaczko packs a great deal of information into a small number of pages: In addition to the nuclear industry and select disasters, he covers the NRC’s structure and mission, as well as principles of nuclear physics. In fact, the reader might want to start with the appendix, “A Peek at the Science of Nuclear Reactors,” which explains fission, the mechanics of nuclear power plants, and why radiation is so deadly.

Some caveats about Jaczko’s book are in order. One is limited sample size. His focus is primarily on the United States, with the exceptions of Fukushima and Chernobyl. Yet around 30 countries worldwide use nuclear power, and his failure to present the bigger picture gives the appearance of cherry-picking his evidence.

Additionally, Jaczko’s assertions of an all-powerful U.S. nuclear power industry are curiously undercut by data points in his own book: Aging U.S. nuclear plants are closing, and the most recent efforts to get new plants off the drawing board were either killed or are drastically behind schedule and over budget.

And nuclear power is a dinosaur. It is now too expensive to survive without subsidies, and the industry’s key selling point of being a greenhouse-gas-emissions-free source of energy is increasingly challenged by the growing use of solar and wind power, both of which have the additional virtue of being free from scary side effects.

Finally, Jaczko’s language, although easy to understand, can be a bit much. He frequently veers from an “aw, shucks” tone that is clearly meant to show what a nice guy he is (maybe because his “hotheaded behavior” during his NRC tenure earned him accusations of bullying his staff and a hearing before the House Oversight Committee) to self-justifying pronouncements.

These include his assertion that he had to be “hotheaded” because, otherwise, “I would never have had the strength to persevere against a relentless, powerful nuclear industry.” Or, “I refused to accept their defeatism” (in reference to commissioners he saw as insufficiently tough on the nuclear industry), which evokes some sympathy for the commissioners who did not come up to Jaczko’s exacting standards.

These criticisms aside, it is clear that Jaczko comes by his reservations about nuclear power through sobering, hands-on experience, and he presents an account that should give any reader pause. Those who get to the end of this book will never see the nuclear industry (or the fictional Springfield nuclear power plant) in quite the same light again.

In a change-of-life career, a former writer and teacher tested his chops in the professional kitchen.