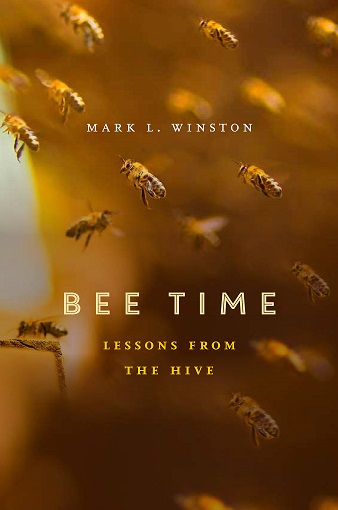 Mark L. Winston’s Bee Time: Lessons from the Hive explores the interface of the human community with the world of bees. The author, a noted entomologist, spent over three decades studying “the collaboration and order of bees, their communication and common purpose.” The beehive, Winston asserts, provides insights into how humans might better interact with one another.

The life of bees has intertwined with that of humans since the dawn of history. The ancient Egyptians decorated their tombs with beehives. The Roman poet Virgil waxed philosophically about bees in his Georgics in 29 BC. More recently, toward the end of the 19th century, the poet William Butler Yeats wrote of “the bee-loud glade.”

Today, the lowly honeybee has become a metaphor for collectivity and serenity. Winston writes of how bees “yield insights into the spiritual, religious, and philosophical realms for those who pause to view their message through art.”

Winston points out, however, that bees are “restaholics” rather than “workaholics.” While they occasionally ramp up by compressing normal time into a frenzy of industry, bees mainly have a short, restful life — the phrase “busy as a bee” is a misnomer.

We depend on bees for their pollinating role in both agricultural and natural ecosystems. In 2008, Winston notes, bees had a “global economic value for agriculture estimated at US $217 billion.” He continues, “Without bees we would have a vastly diminished grocery, missing most of the fruits, vegetables, berries, and nuts we depend on for a healthy, balanced diet.”

Honey production is an important multibillion-dollar industry, part of a revolutionary global interest in good health. Honey’s uses are many. In addition to being a popular sweet, honey is used for the treatment of stomach ulcers and as a wound and burn dressing. Turkey, Italy, China, and the United States are top honey producers. Currently, owing to the profitability of honey, the industry is beset by unscrupulous marketers who adulterate honey with additives and sell a low-quality product.

Winston argues compellingly that the bee is a peer in the natural world, “one of the few with which we share a deeply ingrained sociality.” The author takes the reader on an extended tour of American apiaries and the beekeepers who struggle to manage their hives in the face of pests, toxins, and colony collapse.

When hives collapse due to a variety of factors, from stress to toxins, they reflect a micro-ecological world that exhibits the same kind of community stress afflicting much of the world today. Honeybees are dying all over the globe, and this dire fact has severe economic implication for both the natural and human worlds. Bees might well be the canary in the agriculture coalmine, the harbinger of disasters yet unseen.

We live in the same “toxic house” and are exposed to the same toxins that afflict the hive. Winston urges us to value nature by minimizing pesticides and allowing flowers and weeds to grow along roadsides and fields. At present, the only large bloc of farmers who take bees seriously are almond and fruit growers, who need the hive to pollinate their groves and orchards.

Lately, there has been increased reader interest in the entomological relationship of nature and technology. Two books published in 2014, David Rothenberg’s Bug Music: How Insects Gave Us Rhythm and Noise and Bill McKibben’s Oil and Honey, are examples of this expanding angle of vision.

Nature can be found in unexpected places, even cities. The expansion of urban gardens and parks in many of our cities has provided an environmentally friendly place for wild bees. Community gardens and local amateur beekeepers are an established part of cityscapes like Vancouver and New York City.

Metropolitan Washington, DC, has become a mecca for beekeeping. Hives can be found at various government agencies and on the rooftops of Georgetown. The White House’s bee colonies are known for their record honey production.

Beekeepers, notes Winston, are as social as their bees, since “beekeeping provides an excellent opportunity to socialize with other keepers and to meet your neighbor over a friendly jar of honey.” It is also a good way for people interested in a healthier world to connect to the environment.

In our frazzled times, this book is a must-read. Bee Time: Lessons from the Hive is elegantly written and full of philosophical insight on insects, nature, and the human condition.

John R. Wennersten, a consultant on water to the Smithsonian, was senior historian for the Smithsonian’s Anacostia Community Museum’s exhibition “Reclaiming the Edge: Urban Waterways and Civic Engagement.” His recent books include Global Thirst: Water and Society in the 21st Century and The Historic Waterfront of Washington, DC.