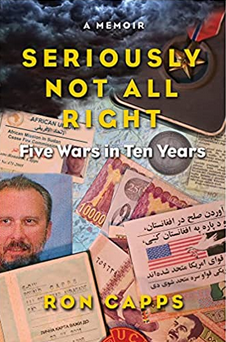 “I didn’t cry during my first year in Kosovo,” Ron Capps tells us. That came later, along with uncontrollable shaking, nightmares, irrational rages, and panic attacks — all the classic symptoms of post-traumatic stress injury (PTSI). Capps was both a Foreign Service Officer for the State Department and a reserve officer in the U.S. Army. Between 1995 and 2007, he alternated between his two professions as he was recalled to active military duty and then returned to being a diplomat. In both capacities, he was confronted with atrocities beyond imagination in Rwanda, Kosovo, Afghanistan, Iraq, and Darfur. The accumulated horror finally broke him.

In Darfur, overwhelmed with futility and sadness, Capps prepared to put a pistol in his mouth and pull the trigger. He saw images rushing at him—the 45 dead from Racak, the raped nun from Bunia, the mutilated family near Senik. Sobbing and talking to himself, he picked up the pistol, chambered a round, and took a breath to calm himself. He was ready. His phone rang. His wife was calling to see how he was doing. That saved him.

Walking us through his travels as an observer and intelligence officer, Capps spares neither us nor himself. We watch as repeated exposures to crimes against humanity, ethnic cleansing, and genocide unnerve him. Back in Washington between tours, he can’t stop his hands from shaking. He suffers crying jags. Crowds panic him. He drinks too much. His marriage breaks up.

Finally, he’s forced to go through the humiliation of seeking help. Like so many soldiers shattered by combat, Capps feels like a coward for not being man enough to manage his problem by himself. But he comes to understand that he’s wounded, not in body but in soul. He faces his memories and begins the long journey of coming to terms with them. Wracked with guilt, he goes through therapy and learns to depend on prescribed drugs rather than alcohol. He functions again.

The reader follows Capps as he struggles with Veterans Administration bureaucracy and long lines and waiting rooms and regularly changing therapists, requiring him to tell his story all over again. But he persists. He reminds himself that warriors are patriots. He’s broken but not defeated.

In the middle of the struggle, Capps discovers the same tool I did while coping with battle trauma: speaking and writing. By telling the story of what happened, both in text and public speaking, he finds the beginnings of peace — he writes his way home. Like me, he weeps when he tells his story. He goes to graduate school to study writing. His work appears in literary journals, the New York Times, Foreign Policy, Time Magazine, and many others. He’s heard on NPR’s All Things Considered, the BBC World Service, and Pacifica Radio. Seeing how writing helped him, he founds the Veterans Writing Project so that men and women like him can use the means he has used. He pulls together his writing to form a book, to be titled Seriously Not All Right.

Capps uses the term PTSD, for post-traumatic stress disorder. I like “injury” better than “disorder” because that usage emphasizes that the trauma is externally inflicted; it’s not an internal function gone awry. Terminology notwithstanding, Capps describes the trauma as a “moral injury.” In one of the best treatises I’ve seen, he presents both the objective scientific analysis of the trauma and the subjective pain that unbearable experience etches on the psyche.

The Veterans Writing Project seeks two outcomes, Capps writes. The first is to give veterans the tools to make sense of what has happened to them through writing it down. The second is to help participants bear witness. That process gives veterans a mission — to record for posterity what happened — and, most important to me, dissolves the isolation that PTSI visits on the sufferer. It welcomes us home.

Seriously Not All Right is not a perfect book. The editing provided by Capps’ publisher is less than meticulous. And despite a glossary at the end of the book, this reader couldn’t keep track of all acronyms, military units, militia groups, rebel organizations, and government and U.N. fact-finding missions. But Capps was a doer before he was a writer. So much action fills this narrative that I had trouble remembering who all the players were.

These are trivial complaints. What’s important is that Capps’ book bears witness. For the vast majority of readers who have never been to war, it catalogues the suffering that combatants and observers go through long after the fact. And it offers readers like me, a PTSI sufferer, freedom from isolation. It makes me understand that I belong to a band of brothers of whom I can be shamelessly proud.

And finally, Capps gives us to understand that grisly experiences leave “an indelible mark on the soul.” These memories will never leave us. We will live them all our days. Our job is to learn to restore our humanity, not because of them but despite them. We brothers must work together to find healing.

Tom Glenn spent the better part of 13 years trundling between the U.S. and Vietnam on covert intelligence missions and was evacuated by helicopter under fire when Saigon fell. With the poet Shirley J. Brewer, he offers a class called “Healing through Writing.” His Vietnam novel-in-stories, Friendly Casualties, was published in 2012. Apprentice House of Baltimore just published his newest novel, No-Accounts.

The Age of the Horse: An Equine Journey Through Human History