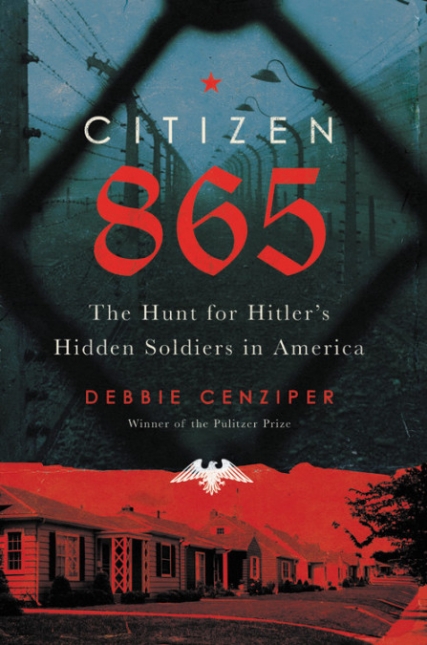 When Adolf Hitler’s defeat in World War II was imminent, a great number of Nazi functionaries made their way to the United States and essentially hid in plain sight. They moved into American cities and suburbs, took on new identities, and successfully evaded any responsibility or punishment for their crimes. They obtained citizenship.

Though attempts were made to bring these war criminals to justice, most cases failed. Many plausible leads were never pursued. However, the Department of Justice’s Office of Special Investigations (OSI), in part by hiring capable and committed historians, as well as legal experts, slowly excavated the facts needed to turn the tide and bring such people to justice.

In Citizen 865, author Debbie Cenziper provides stunning insights into these Nazi hunters’ skill, accomplishments, and dedication. She retraces their steps, giving us two layers of investigation. We learn how these professionals went about their work, interpreted the law, and prevailed in their cases. We also learn quite a bit about how Cenziper did her own investigation of the investigators, making the case for our appreciation of their efforts.

To accomplish this, she provides capsule biographies of many key figures, illuminating their ambition, their frustrations, their sacrifices, their home life, their intelligence, and their courage. They are real people we get to know and like.

The title of the book refers to Jakob Reimer, one of the monsters who did what he was told and helped slaughter untold thousands of Jews in Trawniki, Poland, where, in the early 1940s, the Nazis set up a “school” for committing mass murder.

The book’s attention-getting opening focuses on the story of 19-year-old Feliks Wojcik and Lucyna Stryjewska, a few years younger. It is a story of overwhelming threats to their lives and communities. These characters are vividly drawn individuals scrambling to survive the Nazi programs built to annihilate them.

It is set in Lublin, a Polish town rich in Jewish history and institutions, but now without support for Jewish survival. The horrors of Feliks and Lucyna’s experiences bring them together, and readers are temporarily left wondering about their chances for a future, allowing the author to paint a different section of her broad canvas.

That includes bringing into sharp focus Reimer’s trial, a small masterpiece within the larger one that is Citizen 865. Reimer’s studied yet congenial nature made him an excellent defendant, but the facts presented by the OSI finally revealed his true nature and criminality.

Like many other incognito former Nazis, Reimer lived in a neighborhood very much like those inhabited by another group of immigrants: Jews who survived the Holocaust and migrated to the U.S. to build new lives, perhaps shopping at the same supermarkets as the hidden SS functionaries and other mass murderers of the Third Reich.

Reimer might even have been a neighbor of Lucyna and Feliks, whose saga fills the beginning of the book. Toward the end, we discover that the couple married in the Warsaw ghetto, lived through hell, made it to the U.S., raised a family, enjoyed grandchildren, and realized most — if not all — of their dreams.

Passionate, provocative, and artfully constructed, this fully engaging work of deeply humanized scholarship is a fine addition to the literature of the Holocaust and its aftermath. It could very well bring Debbie Cenziper her second Pulitzer.

The hair and the sound were both bigger in the 1970s.

This chronicle of the problematic icon is well researched, sincere...and arguably unnecessary.