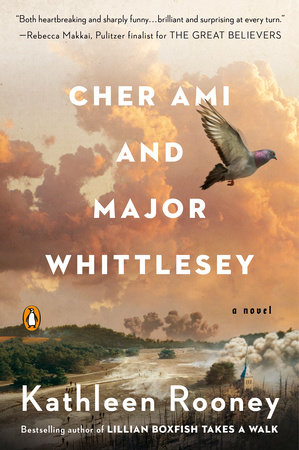 Cher Ami and Major Whittlesey concerns a small battle of that long war that gained international notoriety. While advancing at Argonne, France, an American unit was surrounded by the Germans. With ammunition depleted and more than half its men dead, wounded, or missing, the unit’s remainder was saved by a British homing pigeon. This champion bird, named Cher Ami by its trainer, was a hen misidentified as a male (Cher, not Chérie). The American unit was commanded by the newly commissioned Major Charles Whittlesey.

The titular protagonists present their stories in alternating chapters, a style that proves a bit tedious. Yet while the use of a talking pigeon seems fanciful, Cher Ami is up to the task. She is an incredibly wise fowl who describes and interprets the meaningless forays she watches from her perch. Author Kathleen Rooney hones here a keen animal observer in the tradition of Archy’s pal, Mehitabel the cat, and Wilbur, Charlotte’s pig.

Whittlesey is a Harvard-educated Wall Street lawyer who has volunteered for military service. As an officer, he is responsible for about 600 souls, conscripted mostly from the working class of New York. Whittlesey’s unit is part of the American 77th Division fighting at Argonne in 1918.

Though the press labeled his unit “the Lost Battalion,” it was neither a battalion nor lost. The soldiers were right where they were ordered to be. Unfortunately, they were surrounded when other allied units failed to provide the required support. Compounding the snafu, American artillery directed a sustained barrage directly on the major’s troops, thinking they were the enemy.

Throughout the novel, readers are treated to lessons on the breeding, nurturing, training, and racing of homing pigeons, as well as their use in warfare. The birds have an instinctive ability to return “home” from wherever they start, even from great distances. They are not restricted to any original actual home but can be trained to return to new and changing ones.

Once released, the pigeons will try to fly to their latest home despite distractions — or the danger from battlefields. These special birds have been used by soldiers for thousands of years. In the U.S., the Army Signal Corps had a pigeon branch until 1957, when electronics finally changed the messaging business.

Major Whittlesey was the commander who ordered the bird released to alert the other Americans that they were strafing their own. Though wounded, Cher Ami delivered her message requesting a ceasefire and rescue. Both requests were immediately granted. But by the time the shelling stopped, six days of carnage had been inflicted by friendly fire. In true military fashion, the brass denied that mistakes were made and publicly blamed the barrage on the Germans.

The author’s treatment of Whittlesey is poignant and gripping. Because of the rescue and resulting publicity, the unassuming attorney became one of the most celebrated soldiers of World War I, along with Sergeant Alvin York. Whittlesey was awarded the Medal of Honor, and his picture appeared on the front page of most newspapers and magazines throughout the world. The sudden fame affected every aspect of his life.

Before, he had lived carefully as a corporate-contracts lawyer and a closeted homosexual. Suddenly, he had no privacy; he was immediately recognized and congratulated wherever he went. Even worse, he was owned by the military and the federal government. There were constant “requests” to give speeches and to attend patriotic events and fundraisers. The celebrity and survivor’s guilt tormented and ultimately doomed him.

Cher Ami was severely wounded during her last rescue flight. She was rewarded with a wooden prosthetic leg, as well as medals from General Pershing and from the French government. She (though still addressed as a he) was sent to the U.S. for treatment and care. The pigeon died within a year and was stuffed. Her handsome remains were given to our grandmother’s attic, the Smithsonian National Museum of American History. Cher Ami is proudly perched there today, prominently displayed in the WWI section of the third-floor Price of Freedom exhibit.

The human and avian protagonists in Cher Ami and Major Whittlesey both provide brutally honest, graphic observations of their wartime experiences and the foolishness of war in general. These ruminations may be overdone, but the message is sincere. Wrapped around this fictionalized history is an authentic but subtle antiwar theme in the tradition of All Quiet on the Western Front and The Red Badge of Courage. Thanks to the author’s elegant, poetic prose, the reader can enjoy learning about homing pigeons, the fascinating backstory of the Lost Battalion, and the brave bird that changed history.

Paul Pearlstein is a docent at the National Museum of American History and has introduced many visitors to Cher Ami. He also served proudly in the U.S. Army Signal Corps, though he never handled a pigeon.

A stylistically clever literary romp through the mind of a dying man.