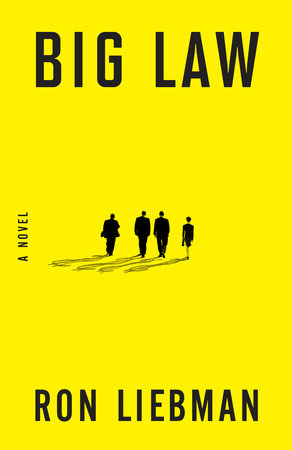 A high-energy legal thriller that exudes insider perspectives, Ron Liebman’s Big Law earns its authenticity in two ways. His main character and narrator, Carney Blake, is a former innocent whose need to secure his position as full-partner leads him to accept an assignment designed to put him in a vulnerable position. Carney’s transition from naïve flunky to wised-up player is accompanied by an emotional-rollercoaster ride that Liebman handles with authority.

Authenticity also resides in the vast amount of information about how big law came into being, how it operates, and how its excesses helped to undermine it.

“Big Law” is the term for those huge multi-office, multi-partner firms that operate more like investment-capital firms than arms of a justice system. They are busy leveraging access to power, borrowing from hedge funds to finance their cases, and destroying or absorbing rivals.

Carney becomes mildly suspicious when his boss tries to stay out of the information and advice loop, keeping a distance from Carney’s handling of the case as if to protect himself from any negative fallout. It is also strange that the firm chooses to represent the plaintiffs — not usually where big law makes its money.

What is Carney’s boss, Carl Smith, up to? Nothing less than taking the firm of Dunn & Sullivan public. He is plotting an IPO that will attract a spectacular amount of cash, and then plans to sell his shares and vanish. But we’ll find out, along with Carney, that Smith has much more to hide than this financial scheme.

As Carney moves more deeply into the case, he discovers a complex, nasty plot driven by greed and the desire for retribution. Clients, colleagues, victims, and the justice system itself can be sacrificed for personal gain.

Liebman rounds out Carney’s character in several ways. He sets Carney into a fully dysfunctional family for whom he feels ultimately responsible. His father is an abusive drunk and his druggy brother is a desperate loser. Both depend on Carney to straighten out their sorry lives, and he takes serious risks for them even while knowing there is little hope of them escaping such dependency.

Carney’s love relationship with a caring and talented African-American woman — also a lawyer — shows other sides of him, not all of them attractive. Liebman knows his character only too well. In fact, the editorial label for the book’s genre is roman à clef. Thus, we may read the novel as a disguised version of actual happenings and even actual people. Veiled memoir?

Liebman’s handling of dialogue is strong and well-pointed. Especially captivating is his reproduction of courtroom sparring, with its blend of accusation, innuendo, sarcasm, indirection, feigned outrage, and other verbal and performance gambits.

The legal steps themselves — the filing of motions to throw out a case or sanction a litigant, the tossing around of assertions and objections, the heavy-duty lawyering that runs up fees — are riotously on display in Big Law.

These complex goings-on require a large cast of characters, and Liebman differentiates them effectively in terms of motive, moral bearings, and legal skill. Those who assist him in the case, particularly an older female partner who serves as his mentor, are compelling.

He also does a fine job of portraying the many places in and around Manhattan within which the scenes are set. His etching of Long Island City comes to mind.

The voice Ron Liebman gives to Carney Blake is a familiar, intimate, and self-deprecating, one that is sure to establish a strong relationship with the reader. Not only will readers want to find out what happens next, but they will also want to hear more of that distinctive voice that admits shortcomings and lets us in on things that would otherwise remain hidden.

Entertaining, suspenseful, and highly informative, Big Law is a warning, and Liebman’s alarm is loud and clear.

A time traveling teen journeys back to 1860 and learns how to live on her own terms.