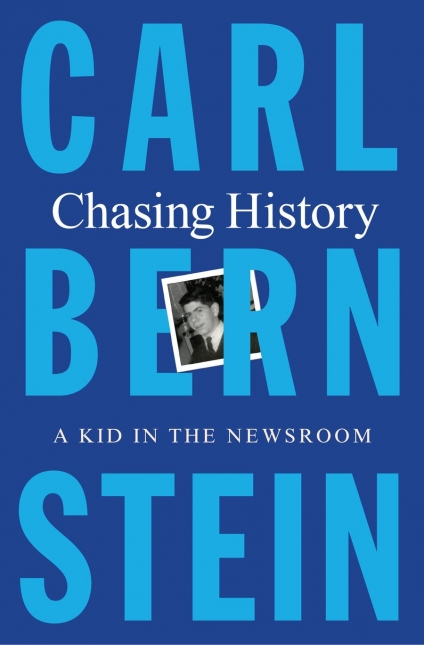 On a warm June morning in 1960, a 16-year-old boy hitchhiked from his home in Silver Spring, Maryland, to a train station where he could catch the Capitol Limited into Washington, DC, to buy a suit. He was a pretty bad student at Montgomery Blair High School, and his father “rightly feared for my future — a concern that was based on hard facts, most of them having to do with the pool hall, my school report cards, and the Montgomery County Juvenile Court.”

But the boy wanted to be a newspaperman. And he needed a suit. He went to a tailor known as No-Label Louie, where he purchased a cream-colored corduroy number with light brown stripes for $25. Thus attired, he went to the Occidental for lunch and saw F.B.I. Director J. Edgar Hoover eating alone at a nearby table. This was, after all, the nation’s capital. The boy’s name was Carl Bernstein. Eventually, he would become one of the most important journalists of the 20th century.

Bernstein’s new book, Chasing History: A Kid in the Newsroom, is a gem about how a teenager with nothing but a desire to be a reporter became — against all odds — a great journalist. It should be required reading in every journalism school in America.

Wearing his No-Label Louie suit and still in high school, Bernstein talked his way into a job as a copy boy at the Washington Evening Star, a revered newspaper. His first interview didn’t go well, and he got what amounted to a “Go away, kid” dismissal. That he finagled a job anyway proved his persistence, a trait that would serve him well in coming years. His ability to type 90 words a minute — a skill obtained as the only boy in his typing class at school — didn’t hurt, either.

The Star’s newsroom was noisy and busy with reporters, editors, and others putting out five editions a day. The paper’s local news was far superior to the Washington Post’s, a point Bernstein makes frequently. He was a good student at the paper, if not at Blair (or the University of Maryland, where he flunked out), and made a name for himself as a go-getter. He moved up to dictation-taker and managed to sneak in a few front-page bylines of his own. The Star was his life.

Chasing History describes Bernstein’s early years as a reporter. Among other pivotal events, he helped cover the presidential campaign — and assassination — of John F. Kennedy; the Bay of Pigs fiasco and subsequent Cuban Missile Crisis; and the Civil Rights Movement, with its murders, beatings, marches, and demands for justice.

Bernstein was younger than most of the people at the Star, but he was welcomed and educated by journalists like Haynes Johnson, Myra MacPherson, and David Broder. He was in the company of others who, like himself, would one day win Pulitzer Prizes.

Readers less obsessed with the news business than I am — I was a broadcast journalist for 35 years — may find some of the book’s day-to-day accounts of life in the newsroom somewhat tedious. It’s a minor issue.

For me, this book works on three levels: It’s first and foremost a compelling story about the transformation of an aimless kid into a prominent journalist. Second, it’s a detailed chronicle of the newspaper business in the 1960s and of newspapers’ once-prominent role in society. And finally, it’s about race.

America was a very different place 60 years ago; Washington, DC, was just shaking off its Jim Crow past. There were no Black reporters at the Star when Bernstein was hired, and there was only one when he left several years later. He does an excellent job describing the racial story of the capital in those years.

Bernstein believed that the Star was a better paper than the Post and at one point couldn’t imagine working for the latter. So how did he find his way there? It was simple: The Star had a policy that all full-fledged reporters must be college graduates. Bernstein had no degree and so no future there.

He recalls being interviewed by Steve Isaacs, one of Ben Bradlee’s subeditors, for a job at the rival Post:

“I told him I thought my best credential to work at the Washington Post was not having finished college. During those years…I had gotten the best education a reporter could get, from the greatest teachers — across town at the Star. He hired me on the spot.”

The rest is journalism legend.

And the Washington Star, by the way, is long gone.