Late Migrations: A Natural History of Love and Loss

A lyrical reflection on life that blends observations of the natural world with family memories. 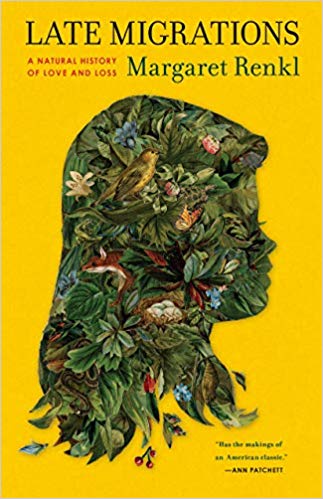 “The cycle of life might as well be called the cycle of death,” writes Margret Renkl at the beginning her new memoir. “Everything that lives will die, and everything that dies will be eaten. Bluebirds eat insects; snakes eat bluebirds; hawks eat snakes; owls eat hawks. That is how wildness works, and I know it. I was heartbroken anyway.”

Late Migrations is a book about grief, yet within that grief lies beauty, wonder, and love. It is also a book about nature and family, and it is self-conscious enough to understand that the wild world and the domestic one exist in a braided ecosystem that hums with meaning. It’s Renkl’s ability to lean in and name the heartbreak that makes Late Migrations worth the read.

Each chapter, written as a short vignette rich in imagery and the language of place, creates an immersive experience for the reader. The chapters span 1940 to 2018 and tell the stories of four generations of the author’s family. There are narratives about her grandmother, chronicles of her children, tales about herself, and various accounts starring her complex and colorful parents. Through them, we witness a coming-of-age: the joining together of the glistening, uncertain fragments that form the mosaic of Renkl’s life.

What is striking is how a powerful yet wonderfully understated love comes through in each of Renkl’s images and family members. “You can always come home, Sweet,” her father says about halfway through the book. “Even if you marry a bastard, you can always leave him and come home.”

The book constantly spirals around caregiving. Raising children, caring for the land, and taking care of elders are themes returned to generation after generation, essay after essay. With these come cycles of growth, attachment, and loss.

While years and locations are often noted at the beginning of the vignettes, the stories themselves swirl together in ways that echo Virginia Woolf’s To the Lighthouse. The tale of Renkl driving her sons to college, for instance, mingles with memories of her grandmother’s old dog that once walked with her to school every day. There is a feeling of literary impressionism in these pages, one where the emotional sensation becomes as elemental as the narrative itself.

The arc of Late Migrations reveals that human experience is not always linear. Instead, past, present, and future are layers of a cake that can be sliced in different ways. Time, memory, and history twist and root together like trees and plants, creating a communicative, interconnected web just below the surface.

There is a trace of the naturalist in Renkl’s work. Abstract panels depicting plants and animals are scattered throughout the pages, harking back to old Victorian field journals. However, these are often everyday things that the author can find in her back yard, such as marigolds, robins, and maple trees.

One of the pitfalls of the lyric-essay form is the prominence of musicality over specificity. Writers will just say “hummingbird” instead of “Rufus Hummingbird.” This shorthand contributes implicitly to our lack of connection with the natural world. Renkl does not do this. Instead, she knows there's music in a name, too. And it is a blessing.

Late Migrations is also a book about the American South — not the simplified version of Yankee imagination or Southern romanticism, but one based on survival, wilderness, and family, which adds some much-needed nuance to the literature of that part of the world. The stories span rural Alabama, Nashville, Columbia, Birmingham, and other landscapes both populated and natural.

Strangely, there is minimal mention of the climate catastrophe that waits just beyond the next thunderhead. Perhaps Renkl’s gentle thesis about climate collapse is this: Stop, listen, be present, and grieve.

Milkweed Editions, which published this book, is a small publisher out of Minnesota well known for its fiction, nonfiction, poetry, and criticism about the natural world. Its authors include heavy-hitters such as Amy Leach, Robin Wall Kimmerer, Dan Beachy-Quick, Ada Limon, and Elizabeth Rush. Margaret Renkl joins their ranks with ease, writing in a way that is self-aware, researched, and thoughtful. There are sure to be dog-eared copies of Late Migrations on the shelves of nature lovers everywhere.

Gretchen Lida is an essayist and an equestrian. Her work has appeared in the Washington Post, the Rumpus, the Los Angeles Review of Books, and many other publications. She is also a contributing writer to Book Riot, Horse Network, and the Washington Independent Review of Books and is working on her first book. She lives in Chicago and is still a Colorado native.