Charlie Company’s Journey Home: The Forgotten Impact on the Wives of Vietnam Veterans 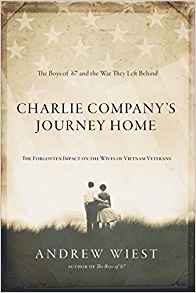 At long last, historians are beginning to examine the hidden history of military wives and families during the Vietnam War. Andrew Wiest, author of the new Charlie Company’s Journey Home and a well-known military historian, succinctly notes of these women, “They had not fought in the steaming rice paddies, but they were they were veterans of the war in their own right.”

Many of these brave women struggled to restore husbands who returned to them in pieces: physical and mental fragments of the young men they had known and fallen in love with prior to deployment.

Charlie Company’s Journey Home is a companion piece or follow up to Wiest’s earlier book, The Boys of ’67: Charlie Company’s War in Vietnam. This scholar is well positioned to analyze these marriages given his intense study of the men who served in the 9th Infantry division of Charlie Company during the war. The unit was unusual in that its men trained as a group for eight months before serving their year-long combat tour together. This created a “Band of Brothers” like those of World War II, men who would remain close during the war and, later, in peacetime.

While the men enjoyed close, supportive relationships with fellow Charlie Company members, their wives could not always count on support from their own communities. Family was sometimes helpful, but it was often a stressor. Many Americans became opposed to the war, creating an uncomfortable position for military wives. Additionally, their status as “single” women and mothers, even though they were married, often isolated them from their peers.

In 2013, Wiest attended the funeral of one of Charlie Company’s members, Jack Benedick. At the wake, he sat with Jack’s widow, Nancy, who thanked him for his work writing about Jack and Charlie Company, but wistfully noted: “No one has ever told our story,” meaning that of the wives and families.

Wiest immediately felt the power of her plea: “Her words hit me like a hammer. How could I have been so blind?”

While the men suffered the horrors of war on the battlefield, the women observed from the sidelines, back at home with jobs and children to raise. In some cases, the wives of Charlie Company barely knew their husbands before marriage. In others, they had solid, well-developed unions.

But what shines through the muck and mud of their husbands’ often miserable experiences in Vietnam is the quiet fortitude, resilience, and determination of the wives to create a better life for their spouses postwar. The women scrimped, saved, and worried, but above all they worked, either in the home raising children, in a job outside the home, or often in both spheres. Their daily routines and sheer exhaustion helped them ward off despair.

One of the most compelling dual biographies in this book is that of Jacque and Don Peterson. High-school sweethearts with movie-star good looks, Jacque and Don married in March of 1966. Jacque learned she was pregnant with the couple’s son, James, the day Don received his draft notice.

Don did spend time with his newborn before he deployed, but in a heartbreaking and not uncommon turn of events, the young soldier was killed in action on May 15, 1967. Despite this terrible blow, Jacque gathered the strength to raise their child and make a success of her life by finding meaning working as a nurse.

The book is divided into seven lengthy chapters that follow numerous couples through the stages of their early lives; their courtships and marriages; the men’s experiences at boot camp and at war; the women’s lives on the home front; and, finally, the men’s return and subsequent readjustment. The latter chapters are heavily shaded with the returning soldiers’ PTSD. Many Charlie Company marriages survive the monster, but some do not.

The author gives light to so many of the wives’ stories that it is difficult at times to keep everyone straight. (The “Cast of Characters” list at the end of the book might have been better placed at the beginning.) It is only natural that an historian would want to do justice to each of these unique women, but there are perhaps a few too many stories to grapple with. A smaller collection would have better enlivened the overall narrative.

The foundation of this book rests on a wealth of oral interviews Wiest conducted with the wives and veterans of Charlie Company. These recordings will be invaluable to scholars of the Vietnam War and are housed at the Center for Oral History and Cultural Heritage at the University of Southern Mississippi. Wiest has written an important work about veterans and their courageous spouses, preserving their stories for us to analyze and reflect upon.

Heath Hardage Lee is an independent historian, biographer, and curator. Her upcoming narrative nonfiction book, The League of Wives: The Untold Story of the Women Who Took on the U.S. Government to Bring Their Husbands Home from Vietnam, will be published by St. Martin’s Press in April 2019.  Reese Witherspoon’s production company, Hello Sunshine, and Fox 2000 Studio have optioned The League of Wives for a feature film.