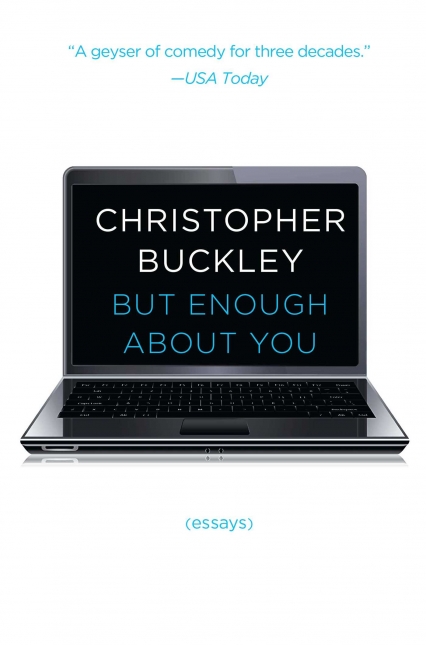 Jimmy Carter’s press secretary Jody Powell lost his wedding ring in the back seat of my car. I once sat in a conference room near the adult son of almost-justice of the Supreme Court  Robert Bork. I am also reasonably confident that I heard the voice of former Speaker of the House Tom Foley down the hallway in an office I was visiting — well, while interviewing for a job. I state these at the outset to establish my insider credentials as a Washington player. In terms of D.C. name-dropping, it’s the best I’ve got. Not Christopher Buckley.

The son of conservative icon William F., the lead speechwriter for Vice President George H.W. Bush, a friend of Christopher Hitchens and Joseph Heller, and the quintessential D.C. insider, Buckley is all the more impressive for not seeming to be very impressed with himself.

Like any great essayist, Buckley’s subject matter ranges far and wide with understated confidence. He’s equally adept when worrying about mistreating his new tropical fish, commemorating a 50th birthday with what is planned as a monumental mountain climb that becomes mostly sauna time with the occasional brisk walk (“Into Thin Hair”), describing amusing turf battles in the White House, and providing a relatively even-handed treatment of his dad’s famous on-air feud with Gore Vidal.

Some recent histories have waxed rhapsodic about the lost golden age of bipartisanship on Capitol Hill. They glance back fondly on the cordially adversarial relationship between Speaker of the House Tip O’Neill and President Ronald Reagan, the wise growls of those last great Senate lions in the 1980s, or Lyndon Johnson’s “getting things done” with Republicans as Senate majority leader in the ’50s. That borders on rose-colored nostalgia to me. Go back to just before the Civil War when one representative went at another with a cane and almost killed him. Sometimes we remember what we want to remember and leave out the rest.

Yet when it comes to true bipartisanship, Buckley walks the walk. A conservative, he endorsed Barack Obama in 2008 and treasures his friendship with the late liberal dervish Hitchens (who confounded his liberal cohorts by supporting Bush II’s war in Iraq). Buckley laughs at Bill Clinton. He laughs at Henry Kissinger. Mostly, he laughs at himself.

Buckley also stands up for writers who are “just” funny. His preface opens with a quote from novelist Somerset Maugham: “Make [the reader] laugh, and he will think you a trivial fellow. But bore him the right way and your reputation is assured.”

Of course, the risk with humor is that there’s really no middle ground: It’s funny or it isn’t. There are some relative duds in this mostly amusing and often insightful collection. The weakest essays, maybe a dozen in a collection of more than 70, fall a little flat like a lifeless “Saturday Night Live” skit. Buckley’s “History of ...” pieces (bug zappers, hotel alarm clocks, hotel mini-bars, billionaires) are pretty thin when stacked up against the best work here.

As a fledgling name-dropper, I found his essay on the fine art of doing it effectively (“As I Was Saying to Henry Kissinger”) invaluable. There’s the surname drop, the counter-surname drop, the posthumous drop, the DNA insinuator, the conversational objective correlative, the geographic preempt, the gnostic parry and, finally, all-purpose lines in case of emergency. “That’s certainly not what Spielberg told me…(cupping hand over the phone) It’s the White House. Do you have another phone I could use? I’m being stalked myself. And let me tell you, it’s a damned nuisance.”

Let me now transition back to my own amateur name-dropping.

Years later, I realized Jody was twisting his ring because he was nervous on the way to our client pitch. I revered him as a marble-like God, but it turns out he was a human being, too.

Buckley’s keen eye and sensitive spirit picked up on that dichotomy a lot faster than I ever did. His personality sketches of Bush I, Reagan, and Hitchens, among several others, tend to strike the perfect balance between pedestal-level reverence and recognition that he’s just been really lucky to spend some time around some really neat people.

Michael
Causey was a senior vice president at Powell Tate. He treasures his signed copy
of the late Jody Powell’s book The Other Side of the Story and
occasionally takes a fond look at its bookmark: a handwritten note from Jody
saying they ought to “have a brew” one of these days.