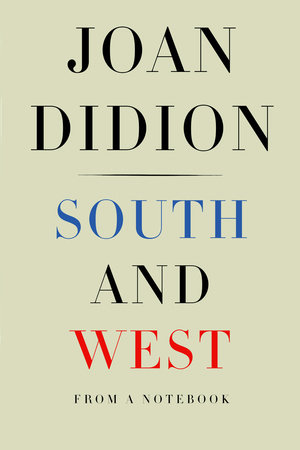 The J. Paul Getty Museum recently held an exhibition titled “Drawing: The Art of Change,” which featured the sketches and studies of various master painters, including Rembrandt, da Vinci, and Watteau. With the passage of centuries, these time-stained fragments are now precious artifacts worthy of their own show.

With 15 highly acclaimed books and a venerable journalism career, Joan Didion is unquestionably a master of American literature. The question that is begged, however, by the publication South and West: From a Notebook is when is it too soon to release sketches to the public as bona-fide works of art? And specifically in the case of literature, should those preliminary drafts ever be published in book form?

Searching for material for a “piece” in 1970, Didion undertook a month-long expedition through Louisiana, Mississippi, and Alabama to investigate “a sense which struck me now and then, and which I could not explain coherently, that for some years the South and particularly the Gulf Coast had been for America what people were still saying California was, and what California seemed to me not to be: the future, the secret source of malevolent and benevolent energy, the psychic center.”

In lush and captivating prose, Didion describes a Southern landscape permeated with decay and burdened by the oppressive weight of history. Even in these preliminary sketches, her rhetorical framing is expert, her eye for the telling detail unerring.

In a place where the “whorehouse goes hand in hand with the woman on a pedestal,” women are expected to occupy themselves with “their cooking, their canning, their ‘prettifying.’” While having dinner with a scion of a New Orleans family, the author is asked who “allowed” her to mingle with “marijuana-smoking hippie trash” as a reporter. She doesn’t wear a wedding ring, which is viewed as suspicious. She does wear a bikini, which is borderline scandalous.

In 1970, the violence of the Civil Rights movement was but a recent occurrence. There is casual talk of the “shooting at Jackson” and “the so-called Philadelphia deaths.” The politicians and civic leaders she encounters are unwilling to cede to the equal-rights movement, though they provide a rosy picture of progress: “The KKK which used to be a major factor in this community isn’t a factor anymore…and I cannot think of any place where the black is denied entrance, with the possible exception of private clubs…Every major retailer hires black clerks, Sears has a couple of black department heads, there’s a black business college here, and a black and white Career Training Institute.”

A “framed slave deed” hangs proudly on the wall in a home in Grenada, Mississippi. A man introduces his servants who had come to him from “my daddy’s place,” as if they were inherited chattel.

Well before the end of her sojourn, Didion fights the impulse to flee to the nearest airport for the next flight out. The oppressiveness of the Southern environment keeps her from employing her usual “reporting tricks,” and she never writes the piece.

The less said about the “California Notes” chapter, the better. Perhaps the publisher needed to add to the word count to justify the $21 list price, and thought Didion’s stream-of-consciousness meditation on growing up in the Golden State was a natural sequitur to amplify the statement quoted earlier about the South being the true future of America.

While Nathaniel Rich asserts in his breathless introduction that the reader is getting “a glimpse inside the factory walls,” the demystification of the writing process makes for cringeworthy reading.

Rich claims, “Didion saw her era more clearly than anyone else, which is another way of saying that she was able to see the future…this southern frame of mind has annexed territory in the last four decades, expanding across the Mason-Dixon Line into the rest of rural America.”

With Steve Bannon and his stooge in the White House and the success of books like Hillbilly Elegy, South and West caters to the trending preoccupation with white identity politics. But to claim that the 1970s South is America’s future ignores the fact that the popular vote was won by the presidential candidate who did not seek to exploit our racist past. Trump is not a harbinger of America’s future but evidence of its imperfect electoral system.

With the elimination of immigration quotas on non-Europeans in 1965, America is no longer just a black-and-white narrative. Racism, a sickness that has long haunted humanity, will not be expunged anytime soon, but undeniable progress has been made in racial equality in the last 47 years, and multiculturalism has seeped into the very fabric of American society. Didion’s omission of interviews with African Americans, as if only whites represented the South, would be pilloried in a contemporary publication.

There is, however, one way that South and West is representative of these Trumpian times: It is a naked money-grab by an insatiable corporation, shilling an overpriced product to a public addicted to name brands.