Less a biography than a judgment on a presidency, this book paints a harsh picture of our 43rd commander-in-chief. 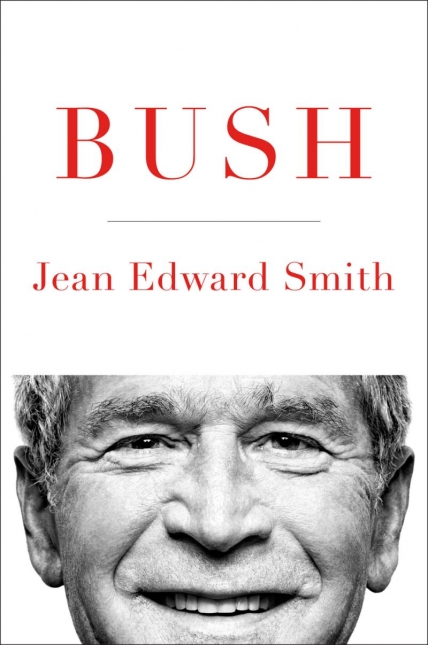 Accomplished biographer Jean Edward Smith brings a range of takes and talents to his work. He has produced magisterial scholarship, laboring long in the stacks to publish the authoritative life of John Marshall, the first chief justice of the U.S. Supreme Court. He has introduced us to worthy folks short-changed by history, like Army General Lucius Clay, the hero of the Berlin Airlift. And he has offered provocative reappraisals of oft-maligned men like Ulysses S. Grant and Dwight D. Eisenhower.

Smith brings yet another approach to Bush, a new biography of George W. Bush. With this very judgmental work, the author aims to craft a foundational verdict on the 43rd president of the United States. If W.’s friends and family have been hoping that “history” might give Bush vindication, they will be disappointed. To the extent that Smith sets the tone for future historians and biographers, Bush seems destined for the dregs of the presidential barrel, along with such illustrious predecessors as James Buchanan and Franklin Pierce.

Smith did not have access to his subject, nor to internal documents from the Bush White House, and he appears to have conducted relatively little primary research. A practiced reader of contemporary political nonfiction will find few new facts or anecdotes in these pages, which rely heavily on the works of topnotch journalists like Bob Woodward, Peter Baker, and Jane Mayer; various Bush family memoirs; and — for the pre-presidential years — biographers Kitty Kelley and Bill Minutaglio.

The chapter on the invasion of Afghanistan and the post-9/11 launching of the “global war on terror,” for example, credits Woodward’s book, Bush at War, in 19 different footnotes. Given the decline in letter-writing and diary-keeping, Smith’s book prompts one to wonder whether Woodward’s books, interviews, and notes will become — alongside email traffic and social-media feeds — the singularly important resource for scholars of these times.

What Smith is selling here are perspective and his powers of analysis — in short, credentialed wisdom. As the jacket of his book notes, he is a professor emeritus at the University of Toronto and a former visiting scholar at Princeton, Georgetown, Columbia, and Marshall. Conservative columnist George F. Will has called him “America’s greatest living biographer,” and Smith won the 2008 Francis Parkman Prize from the Society of American Historians for his biography of Franklin Roosevelt.

In Smith’s view, Bush more than fails the test of presidential leadership. “Rarely in the history of the United States has the nation been so ill-served as during the presidency of George W. Bush,” the author begins, in the very first words of his preface. He ends his book, 660 pages later, considering whether Bush has been the very worst president in our history.

There was no hidden side to George W. Bush, Smith writes. What you saw was what you got: a toxic blend of arrogance, ignorance, and blissful certitude. With one exception — the manipulative and resolute Vice President Richard Cheney — Bush surrounded himself with sycophantic White House aides who labored to keep him in his comfort zone riding bicycles or chopping brush on his Texas ranch.

In a chapter aptly entitled “Asleep at the Switch,” Smith reminds us how Bush, despite scores of detailed warnings, left America open to attack by Al Qaeda in 2001. The president attended only one National Security Council meeting before the terrorists’ assault on Washington and New York and, in the course of the longest presidential vacation in 20 years, ignored the most alarming of 44 intelligence reports he received on the threat posed by Osama bin Laden — the August 6, 2001, briefing with the headline, “Bin Laden Determined to Strike in U.S.”

After the attacks — in which they spent time being rushed to bunkers by ashen-faced Secret Service agents — the president and his advisers reacted with 1) relief that their failure to deal with Al Qaeda was ignored by the press and populace in the general rush to rally round the flag; 2) fear that the more outlandish intelligence reports about terrorists with weapons of mass destruction might prove true; and 3) a craven opportunism to manipulate the tragedy for political gain.

Bush then squandered the spirit of national unity and international commiseration that the 9/11 attacks had bequeathed. The toppling of the Taliban was a model operation, except that the U.S. let Bin Laden escape. Abandoning his pledge to do “whatever it takes” to bring the terrorists to justice, Bush made the catastrophic choice to shrug off Al Qaeda and invade Iraq instead. The Bush administration hid or ignored the projected costs, and to justify his preemptive war, the president deceived the American people with tales about terrorist nukes and nerve gas. The smoking gun, Bush and his advisers said, must not be a mushroom cloud.

Flush with easy victory, the conqueror of Baghdad succumbed to grandiosity. Bush wrapped himself in Christian mission and took on an exalted pose as a prophet of democracy. He donned a flight suit and landed on an aircraft carrier, where a sign proclaimed, “Mission Accomplished.” His political adviser, Karl Rove, famously boasted how the president and his team were not bound to “the reality-based community” but were instead, “an empire now, and when we act, we create our own reality.”

Meanwhile, in Iraq, Bush and his appointees transformed the American military mission from liberation to occupation and “nation-building.” They disbanded the Iraqi army and bureaucracy — unleashing sectarian discord and a guerrilla uprising that would ultimately claim the lives of 4,539 American soldiers on his watch, wound another 30,740, and morph, in time, into the militant pestilence known as ISIS. Bin Laden could not have written a better script.

Along the way, Bush authorized a dismal list of aberrant means of waging war on terror: the rendition of prisoners to torture-friendly governments; the widespread government eavesdropping; the abandonment of civilian justice in favor of military tribunals; the waterboarding and other forms of torment. Strivers and mediocrities like Bernard Kerik, Scooter Libby, Jon Yoo, and Michael Chertoff floated to the top.

Arrogance, political calculation, and the failure to learn were the connective themes of the two Bush terms. Bush’s almost surreal cockiness brought final ruin to his presidency during Hurricane Katrina, when he and his advisers failed somehow to grasp that the destruction of an American city was, in fact, an important event.

The American economy, meanwhile, was cruising toward an iceberg. The costs of the war in Iraq, and the concomitant loss of revenue from “the Bush tax cuts” passed by Congress, shoved the federal budget from surplus into deficit. At the same time, the president’s promotion of an “ownership society” left markets free of advisable regulation.

Smith spares Bush much of the blame for the cataclysm that dominated the final act of the president’s reign — the subprime-mortgage crisis, financial breakdown, and Great Recession of 2007-2009. It’s as if, having chronicled all the other acts of folly, the author can’t bring himself to kick this poor dumb president one more time. If brighter guys like Alan Greenspan and Ben Bernanke failed to recognize the coming catastrophe, Smith argues, it is unfair to blame the guy with the Yale University and Harvard Business School degrees in the Oval Office. He was, after all, just a legacy.

To the Bush administration’s modest list of successes — enactment of a prescription-drug benefit for Medicare recipients; a nuclear arms reduction treaty with Russia; the historic commitment to battle AIDS and other diseases in Africa — Smith adds the president’s pragmatic response to the breaching financial crisis. By bailing out banks and auto companies, Smith writes, Bush helped ward off a second Great Depression.

Bush is not a true biography; it’s a book about the Bush presidency. Smith does not profess to know what makes his subject tick. Bush’s childhood, adolescence, and early manhood are dispatched with broad stereotypical strokes: oldest son, snotty rich kid, party animal, reformed drinker, and convert to Christ. By page 54, Bush’s father has been elected president, and W. has returned to Texas, preparing to run for governor.

Smith’s reliance on secondary sources leads to occasions of flabby scholarship like this, from the chapter on Bush’s Vietnam-era service in the Texas Air National Guard: “It has been suggested by more than one writer that Bush’s abrupt departure from flying coincided with the Air Force’s introduction of drug testing for flight crews.”

The readers of Bush will find few answers about George W. Bush’s motives and motivations. In its pages, he is very much a caricature.

“Unprepared for the complexities of governing, with little executive experience and a glaring deficit in his attention span, untutored, untraveled, and unversed in the ways of the world, Bush thrived on making a show of his decisiveness,” Smith writes. “He strutted around like a cowboy.”

For all but gleeful, hardened Bush-haters, this is not a pleasant book to read. Americans have not behaved especially nobly, or wisely, since the fall of the Berlin Wall and the collapse of the Soviet Union signaled victory in the Cold War. The Bush years, like the Clinton years that preceded them, seem a time of squandered opportunity, and a range of institutions — the Democratic and Republican parties, the media, U.S business leaders, the Supreme Court, and Congress share the blame.

In the 1973 motion picture “Sleeper,” a character played by Woody Allen wakes up 200 years in the future to discover (among other revelations) that the lifestyle of the 20th century has been found to possess previously unappreciated virtues: red meat, fats, and cigarettes are now prized by scientists as nutritional. It is possible that the Bush presidency could undergo a similar reappraisal.

Maybe someday the era — that time between the hanging chads of 2000 and the collapse of Lehman Brothers eight years later — will, like the culinary fare in the Allen movie, come to be seen in a better light. But, for now, it looks like eight years of junk food.

John A. Farrell is the author of biographies of Tip O’Neill and Clarence Darrow, and an upcoming biography, Richard Nixon: The Life, which will be published by Doubleday in 2017.

By Nicholas A. Christakis