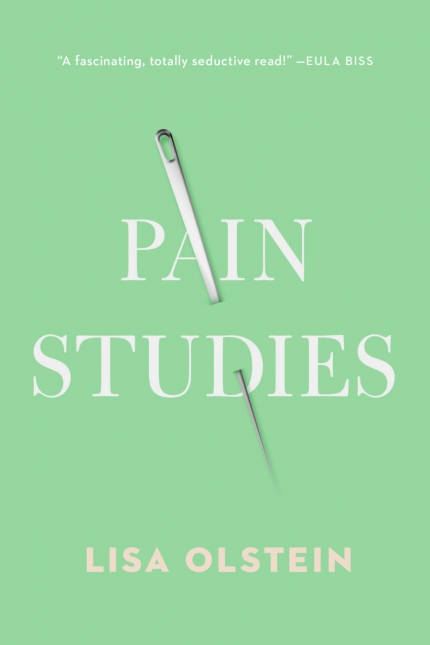 If you think poets shouldn’t dabble in nonfiction, Lisa Olstein’s Pain Studies will do nothing to convince you otherwise. The book has moments so contrived that the reader might wryly observe the title as apropos.

Olstein, a poet, writes this book as a rumination on the nature of pain, riffing on her experience with migraines that she describes as “a headache that lasted three months acute-chronic, chronic-acute.”

When the author leans on her poetic skill, the outcome is beautiful, captivating prose that bleeds and thrums: “Left brow like a pressed bruise, an overripe peach you accidentally stuck your finger into.”

But when she waxes more philosophical, the reader is left baffled at best and groaning at worst. For example, there is an entire chapter on the color of pain. And navel-gazing moments like this one: “Drowning, live pain, has a way of flooding you with the present.”

When Olstein stops taking herself so seriously, she makes insightful (and incisive) observations about what we mean when we talk about pain. Her deadpan lines — “We’re notoriously bad at talking about it, even literally, as in, do you have it, how much, what kind” — will leave readers nodding enthusiastically.

Her accounts of dealing with various healers are equally wry and amusing. She uses an example of good medicine as someone who asks her whether she has found anything that increases the pain, rather than decreasing it. And we can all relate to the humor behind well-meaning advice that fails to deliver: “She’s visibly disappointed I report back miracleless.”

Some of the choices that Olstein makes, however, will confound more than cheer. She dedicates no less than two chapters to Joan of Arc. Why? Because “Joan’s refusal to translate her experience into acceptable terms” is apparently analogous to the trials of pain sufferers, and because “she was a woman surrounded by prying, know-it-all men who pelted her with questions.”

Readers may be willing to hang their coats on such flimsy pegs, but Olstein doesn’t stop there. Exploring the work of obscure philosophers like Antiphon the Sophist will, again, do no favors for those wanting to deny the characterization of poetry as affected and decadent.

Then, we have a whole chapter on the TV show “House.” While the program’s exploration of pain makes this rumination salient, in today’s rapidly moving pop-culture zeitgeist, it feels quite dated to discuss a show that ended in 2012.

Eyebrow-raising choices aside, however, the book is incredibly creative in its style, seamlessly suturing together poetry, journal entries, and discourse analysis. Olstein’s strength as a poet imbues her prose, too, even when it manifests in lists: “Opium poppy, ordeals, orthopedist, Ovid.”

The poems included in Pain Studies are vivid and enthralling. And Olstein’s portraits of how others respond to her pain are compelling and relatable. But could this unconventional meditation have benefited from ditching the obscure references and morose gravitas? A resounding yes.

The Cabaret of Plants

A fascinating, compulsively readable look at the lives — both outer and inner — of the flora all around us.