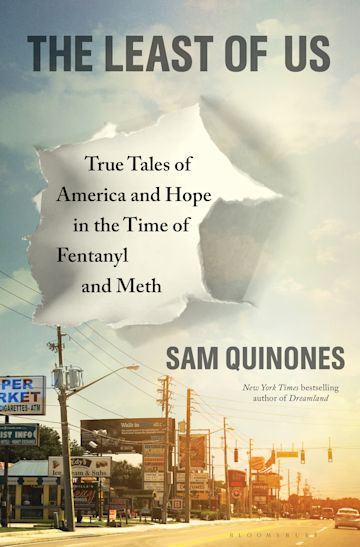 As the opioid crisis raged in the U.S. in the early 2000s, prosecutors and civil litigants began taking on the Sackler family, whose Purdue Pharma had reaped enormous profits from marketing and selling the drugs. The legal assaults led to billions of dollars in civil settlements, Purdue’s bankruptcy and dissolution as a for-profit company, and social approbation for the Sacklers.

Meanwhile, Mexican drug traffickers developed and started mass producing a synthetic, particularly destructive type of meth. By the time the Sacklers were being held to some account in court, this drug was in wide distribution in the U.S, upending — or ending — countless lives. Throughout it all, small towns in dark-red, lock-em-up states struggled to combat the widespread addiction ravaging their citizens.

Veteran journalist Sam Quinones reports all this and more in his new book, The Least of Us: True Tales of America and Hope in the Time of Fentanyl and Meth. The sweeping work is a follow-up to his 2015 Dreamland: The True Tale of America’s Opiate Epidemic, which dug deeply into the circumstances and lives of the people who created, battled, profited, or suffered from the drug epidemic that has devastated huge swaths of the heartland beginning in the 1990s.

In that earlier book, the author’s investigative reporting revealed how opioid addiction was fueled, in part, by well-meaning but misinformed physicians overprescribing the potent drugs, causing innumerable patients to get hooked. Many of these people eventually turned to more affordable black-tar heroin to feed their habits. Drug rings soon sprang up in under-the-radar places like Columbus, Ohio, and Charlotte, North Carolina, where business boomed.

The book is organized into five sections, which Quinones skillfully uses to tell the stories of ordinary people whose lives were derailed by fentanyl, meth, and other illicit drugs. He also shares research on how drugs and other substances — including sugar — affect the pleasure centers of the brain and spark addiction.

The sheer number of people presented here — from prosecutors and police officers to traffickers (both American and Mexican) and jailers — can feel overwhelming, to the point that some readers may wish for a flowchart. But the payoff of keeping track of so many characters is worth the challenge, for their stories are compelling.

Take that of Angie Manning, a Navy sailor who, along with her husband, adopts the developmentally challenged baby of a young mother who overdosed on several drugs and became unable to care for herself. Then there’s a man named Eric Barrera, who tells Quinones:

“[Drugs] began to change in 2009 and got worse after that. The way I saw myself deteriorating, tripping out and ending up homeless, that’s what I see out here. They’re hallucinating, talking to themselves. Now, it’s people on the street screaming. Terrified by paranoia. These people had normal lives.”

Quinones notes an L.A. Times report tying Los Angeles’ rise in homelessness in the 2010s to the advent of “weirdo meth.” He explains how drug dealers in the U.S. developed a new way to make meth with a chemical known as P2P instead of the usual ephedrine. “Many combinations could be used to make P2P,” he writes. “Most of these chemicals were legal, cheap, and toxic: cyanide, lye, mercury, sulfuric acid, hydrochloric acid, nitrostyrene.” For users, the consequences were disastrous.

Much of The Least of Us is on the dark side, and not every individual’s attempt to break free of drugs or every program is an unqualified success. As someone addicted to crack and alcohol who’s been sober for nearly 30 years, I can attest that recovery is not a straight line. There is no magic-bullet solution to the opioid epidemic, which Quinones views as a symptom of a larger problem in America:

“I see connections to our national drug-addiction epidemic to the fact that every year dozens of Fortune 500 corporations pay no federal income taxes, while many American families worry about rent and food. I see the epidemic connected to the massive amount of U.S. wealth diverted from the bottom and the middle to the top in the last forty years. Jobs that went overseas were just the free market at work — nothing to be done.”

Yet ultimately, despite it all, he is hopeful. “Like the pandemic, fentanyl and methamphetamine present us with a huge opportunity for change,” Quinones writes in the penultimate chapter. “They are calling on us to embrace the ignored, the forgotten, and the despised around us, to allow them space so they might unlock their energies and abilities. When they do, like a natural resource, they will push us all forward.”

Ruben Castaneda is the author of S Street Rising: Crack, Murder, and Redemption in D.C. He writes about health issues from a consumer-advice perspective for U.S. News & World Report.