Body by Darwin: How Evolution Shapes Our Health and Transforms Medicine

A fascinating, sometimes complex look at how DNA, natural selection, and the environment combine to impact humans’ well-being. 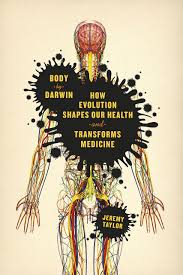 We humans are a curious species. Despite millions of years of evolution, natural selection has failed to pump up our birth rate, eradicate heart disease, or eliminate malignancies. We continue to suffer from back problems, psychiatric illnesses, autoimmune disorders, and deadly infections. Our life expectancy has increased, yet still we suffer. Why has natural selection not “selected out” traits that make us less robust?

Science writer and former BBC producer and director Jeremy Taylor (Not a Chimp) examines our bodies and illnesses through the lens of evolutionary medicine in his thoughtful new book, Body by Darwin: How Evolution Shapes Our Health and Transforms Medicine, in order to explain why bodies are built as they are and why there is so much disease in the world.

Taylor’s thesis is that our bodies are put together a certain way because “Evolution is not ‘interested’ in health or happiness, or longevity. To put it into Darwinian jargon, [evolution is] only interested in maximizing an individual’s reproductive fitness.” Taylor explains that humans are genetically programmed to survive beyond their reproductive years if the traits they carry and pass on serve to increase the survival rate of their offspring.

Evolution, according to Taylor, is not focused on change that wipes out disease or makes us healthier. Evolution’s focus is on allowing us to adapt to the environment and reproduce. By understanding the evolutionary basis of our bodies, we can arrive at a better understanding of them and the maladies that afflict us. Taylor asserts that grasping the evolutionary scaffolding of our bodies may lead us to develop new therapies for disease and inspire us to practice medicine in new ways.

Taylor rejects the engineering-based thesis that we are subject to diseases because our bodies are malfunctioning machines. He supports the work of evolutionary medical researchers who assert we are vulnerable to disease because the evolutionary focus on reproduction results in genetic conflicts and compromises influenced by the environment. Our bodies cannot change as rapidly as the environment or pathogens; therefore, we will always be susceptible to sickness.

Taylor supports the work of four pioneers of evolutionary medicine — Randolph Nesse, Stephen Stearns, Diddahally Govindaraju, and Peter Ellison — who say our vulnerability to disease and degeneration is because evolution focuses on reproduction and our bodies “are bundles of compromises that are full of unavoidable trade-offs and constraints.”

Taylor’s book covers a wide swath of medical territory. He examines the evolutionary roots of illnesses that occur with varying rates of prevalence in modern society, such as allergies, dementia, and retinitis pigmentosa. Part case history and part research report, Body by Darwin is not a self-help book. Each section is dedicated to a particular disease, and within each section, Taylor presents individual patient stories, interviews with physicians and medical researchers, and reports on research, some of it experimental.

In Body by Darwin, Taylor suggests that as our bodies evolved, there have been physical tradeoffs. Live long enough and you’re likely to develop back problems and malignancies. He notes that while our evolution to bipedalism resulted in a flexible musculoskeletal system, our stance increases our risk for osteoporosis and scoliosis, the abnormal curvature of the spine.

He reviews data that suggest our modern lifestyle results in many women delaying childbirth, which may increase their risk of breast cancer. And the way our hearts are supplied with blood “is a classic case of evolutionary compromise…[yet] evolution is leading us toward a number of exciting medical technologies to repair damaged hearts caused by a problem with their plumbing.”

Taylor also discusses the role of genetics, immune dysregulation, and inflammation in triggering disease. Contemporary researchers are studying chemotherapies genetically targeted to stabilize rapidly evolving and mutating cancer cells; scientists are linking immune disease to illnesses and disorders that include asthma, autism, and rheumatoid arthritis; and studies indicate inflammation may be linked to multiple ailments. Taylor addresses studies that indicate genetics may direct our physical responses and body functions in ways we are unaware of.

For example, he reviews research that indicates paternal genes may be responsible for an infant’s nocturnal waking and demanding to be fed. This behavior may be an adaptive mechanism that extends the mother’s lactation period, delays her ovulatory cycle, and prevents the birth of a new baby, whose emotional and nutritional demands would rob the first child of optimal nutritional and emotional care.

Taylor presents a fascinating case of a teenager whose autistic symptoms were mitigated after he received oral treatment with the eggs of an intestinal parasite. Based on the “hygiene hypothesis” — the theory that our ancestors harbored microbes that bolstered their immune systems and helped them fight off diseases, and that modern society has stripped us of these “helpful” organisms — and guided by the results of other clinical trials, the man’s physician dosed him with Trichuris subs ova (TSO) whipworm eggs.

The success of this highly experimental treatment suggests a link between autoimmune disorders and autism. The young man remains symptom-free as long as he receives the whipworm eggs. Researchers suspect autism is related to inflammation and immune disorders, and epidemiologists have found that women with autoimmune disease are more likely to have children with autism.

While many of the treatments and studies Taylor cites in Body by Darwin are experimental (which he acknowledges), there is value in reading about the patient cases and therapies because these treatments may be the future standard of care for a particular disease, and they give us a new way of looking at diseases that plague us.

I suspect some sections, such as Taylor’s explanation of the immune system, may be beyond the understanding of lay readers. Genetics and immunology are complex topics and are not easy to understand, much less describe. There is a wealth of information in Taylor’s book, and while readers will have to do some work in sorting through it, those who commit time and thought to Body by Darwin will come away with a new understanding and appreciation of our bodies and how and why they work.

Karen Hansen is a former CBS Network News researcher, writer, and associate producer. She has been a medical writer for over 18 years and has a special interest in infectious diseases, women’s health, and psychiatric disorders. She lives in Wilmington, Delaware.