An intriguing reassessment of what really fueled WWII. 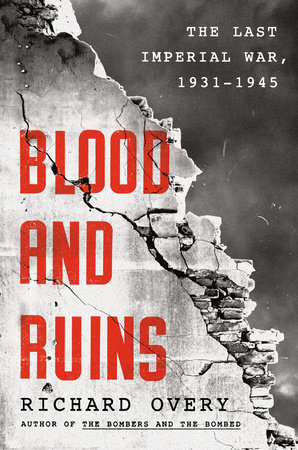 British historian Richard Overy argues in his heavily researched Blood and Ruins that the conventional chronology of World War II is no longer useful. For Overy, the conflict originated not in Germany’s invasion of Poland in 1939, but in an imperial competition among nation-states Germany, Italy, and Japan for control of land and resources ignited by the Japanese invasion of Manchuria in 1931.

The war, he writes, was truly a global event. Britain and France, in the 1930s, were two major imperial powers that stood in the way of Italy’s plans for both Mediterranean and African empires and Germany’s desire for an East German empire that included large chunks of the Russian land mass. Further, Western empires were thwarting Japan’s plan for a Greater East Asia Co-Prosperity Sphere.

Overy contends WWII was “the result of decisions taken in Paris and London and not Berlin.” Adolf Hitler, he asserts, wanted to consolidate his 1939 gains in the east without fighting Britain and France; he was reluctant to step across the threshold of war. It’s in this context, the author reminds readers, that Great Britain’s prime minister Neville Chamberlin, later branded an appeaser for so quickly acquiescing to the führer’s demands, was in 1938 widely regarded across Europe as a heroic figure who maintained the peace.

Hitler was frustrated by the Allied declaration of war in 1939. The Nazi leader complained that, by invading Poland, he had taken a mere 100,000 square kilometers of land, whereas the British and French, via their empires, ruled 40 million square miles of territory worldwide. Explains Overy:

“The war against Poland can better be understood as the final stage in a largely uncoordinated movement to found new territorial empires in the 1930s, rather than the conventional view that sees it as the opening conflict of the Second World War. Looked at from this longer perspective, the effort to found new imperial orders linked the fate of Japan, Italy and Germany in the regions in which they had chosen to build them.”

Along with outlining the adversaries’ territorial interests, Overy pays close attention to the racial and ethnic oppression and forced labor perpetrated by the Axis and Allies alike. Both powers appropriated food from their colonies and areas of control, creating starvation and famine abroad, if not at home. Great Britain struggled against divisive forces within its empire. And around the globe, displaced persons, Jews, and members of nationalist movements were tightly monitored and often controlled via military violence meted out by their various overlords.

In the United States, African Americans were treated as second-class citizens throughout the war and were assigned to menial work in the military. German prisoners of war interned in the U.S., in fact, enjoyed better treatment and food than did Black American troops at the front. Here and elsewhere, Overy makes the interesting point that the Allies were fighting more to protect their empires than to preserve democracy for their many subjects.

The Second World War was fought to a great extent by hundreds of thousands of non-French and non-British conscripts from the colonies — a fact conveniently overlooked in Allied war propaganda. The war forced the mobilization of entire populations, too, and the output by the warring powers of tanks, aircraft, and other engines of destruction dwarfed anything seen before or since. By 1943, Russian and U.S. mass production of materiel reached astronomical levels.

It was not all the work of men, however. During the national mobilizations for war, women played a critical role in factories and in the fighting. In America, 400,000 women served in the armed forces. For their part, the Soviets enlisted 120,000 women in the Red Army who fought alongside men during many hellish battles on the steppe. “The iconic image of a young woman nestling a gun in her arms was not mere propaganda,” writes Overy.

Ultimately, three battles contributed to the Axis’ defeat. They were El Alamein, which gave control of the Mediterranean basin to the Allies; Guadalcanal, which preserved U.S. naval and land power in the Pacific theater; and Stalingrad, a turning point that involved the sacrifice of over a million Soviets in the most important battle of the war. Without the catastrophic losses it incurred in Russia, Germany would have been a much more dangerous adversary on the western front, and for far longer.

The surrender of Italy in 1943 and Germany and Japan in 1945 brought to an end the 14 years of Axis empire that had begun in Manchuria in 1931. Although Britain and France struggled to maintain — by force — their imperial systems in the postwar era, they ultimately ceded to the anti-colonial forces of self-determination and nation-building. Richard Overy’s thoughtful, highly perceptive Blood and Ruins ably chronicles these empires’ falls in a study that goes far beyond the standard accounts of World War II.

John R. Wennersten is emeritus professor of history at the University of Maryland, Eastern Shore. He recently published Strange Fruit: Racism and Community Life in the Chesapeake — 1850 to the Present (New Academia Publishing).